Luis Suarez has offered his friend and former team-mate Lionel Messi advice amid uncertainty over his future at Barcelona. Messi is out of contract with Barca at the end of June and is yet to commit to another deal, prompting rumours that he could leave a club he has represented for 17 years.

The 33-year-old has enjoyed yet another outstanding campaign for the Catalan club, contributing 38 goals and 11 assists in 47 appearances across all competitions.

The Argentine finished as the top-scorer in La Liga with 30 goals, but Barcelona could only finish third, seven points behind Atletico Madrid.

Atletico’s first title in seven years was secured thanks in part to Suarez, who scored 21 goals in La Liga after joining Diego Simeone’s side on a free transfer from Barca last summer.

The Uruguayan striker left in controversial circumstances, with manager Ronald Koeman and the club’s former president Josep Bartomeu unsure of the 34-year-old’s qualities and high wages.

Suarez may have moved on from the club he represented for six years, but he still wants Messi to commit to a new contract at Barcelona. 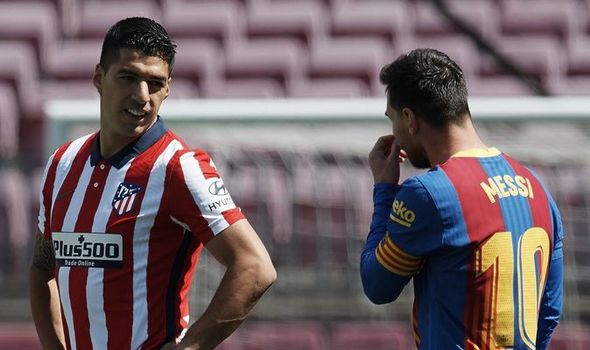 “As a friend and football fan, and as a loved one, I would be happy, I would be delighted and that is what I would advise him,” he told Spanish radio station El Partidazo de COPE.

“For what he brought to the club, for what the club gave him.”

Barcelona allowing Suarez to join Atleti on a free transfer last year has backfired, but they look set to solve that problem partly with the signing of Sergio Aguero this summer.

Aguero is set to depart Manchester City at the end of June and Pep Guardiola all-but confirmed that he will join Barca when his deal expires.

Suarez has given the seal of approval to the transfer, which will see the two Argentine forwards link up at club level for the first time.

“Now there is a new board of directors, other people, and they are looking for a quality player,” he said.

“Obviously he has a relationship with Leo, but you cannot argue about what a quality player he is and what he can give to Barcelona. I support the decision totally.”

Despite speaking glowingly of Messi and Aguero, Suarez remains bitter about the nature of his departure from Barcelona last summer.

“I’m never going to go against Barcelona, they have given me everything and allowed me to get to the elite, but obviously the president [Bartomeu] said everything in the press instead of calling me,” he said.

“Koeman told me I wasn’t in his plans, then he said ‘If we don’t figure this out by tomorrow, you’re back in my plans and I’m counting on you against Villarreal.’

“I saw then that the man had no personality. He was not strong enough to tell me I was not needed.

“The decision [to sell] came from the board.”