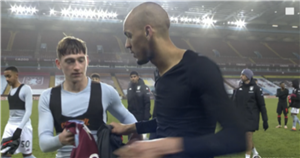 Barry scored Villa’s only goal of the game as the far more experienced Reds side came out on top in their FA Cup third round clash.

The 17-year-old was one of multiple debutants against the Premier League champions due to the Covid-19 outbreak at the club’s training ground which meant the entire first team were unable to play.

After the game, Barry, who spent time in Barcelona ’s academy, was desperate to get his hands on a shirt from one of the Liverpool stars.

The teenager managed to get his hands on Fabinho’s jersey, initially swapping his own as is tradition.

But after quickly being reminded that it was a one of a kind on his debut, a red-faced Barry admitted he had to ask for his shirt back.

He told BT Sport: “I nearly (swapped it) but I remembered it was my debut shirt so I got it back. Credit to Fabinho as I got the shirt as well. Got both of them.

Speaking about his goal, he added: “I knew that I had it as soon as I saw it and it came out for me. I put the ball in the back of the net and it’s the proudest I’ve ever been of myself.

“My family were probably screaming at the TV when it hit the back of the net, and I’ve never been so proud. It happened so quickly and I was just happy to score – and hopefully many more.

"I was working very hard. When I celebrated everything came out of me. It was relief.

"I've never been so proud of a team – from start to finish we gave it our all."

Villa captain Jack Grealish sang Barry’s praises at half time, tweeting: "What a first half that is from the lads, every single player excellent! @LouieBarry6 brilliant composure!! #AVFC"