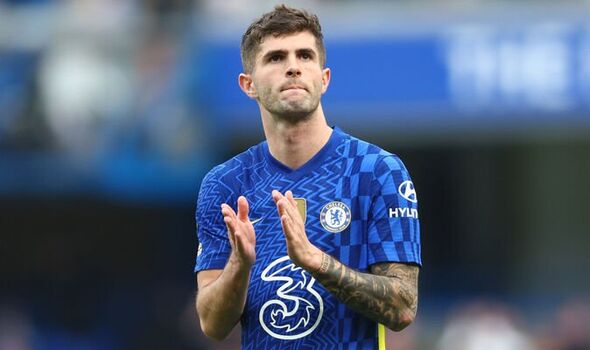 Liverpool boss Jurgen Klopp once had high praise for then-Borussia Dortmund starlet Christian Pulisic and suggested that the winger would cope with a transition to the Premier League. Resurfaced comments made by the German come amid speculation that the Reds could sign Pulisic from top-flight rivals Chelsea.

Liverpool were strongly linked with a move for Pulisic in the summer of 2018, a year before he joined the Blues. The American had produced some excellent performances in a breakthrough season in Germany.

Questioned on reports of the Anfield outfit’s interest in Pulisic, Klopp remained coy but said the now-23-year-old would one day have the chance to play in England and could even join a club like Liverpool. He told journalists: “He has a contract at Dortmund, no? That’s the first problem.

“I like Christian, I’ve known him since he was a kid. He’s still not really old, he’s a fantastic player, and it’s deserved that people think highly of him in America.

JUST IN: Liverpool star Sadio Mane has five options if Bayern falls through

“In Germany, it’s the same. If he wants to play in England or whatever one day then for sure he has the chance to do so but he’s at a really good club for his development at this moment.

“It’s really good to be at a club where they know him already. He had not his best season last year but he was still a decisive player but it’s important in that age group that there’s no rush.

“He still has 14 or 15 years to play in his career and that’s good and he wants to be the best Pulisic he can be. For this, there is still space for development.

“If – at one point – he will join us, I don’t know. I like him, it’s not that that could be the problem, but we respect contracts still and there’s no market I know about at the moment. We did our business and Dortmund are doing theirs. All good.”

Pulisic signed for Chelsea the following summer and has made 115 appearances for the west London club. However, he has struggled for regular game time among a stacked attacking armoury under Thomas Tuchel.

Liverpool have been widely linked with a £50million transfer and could target Pulisic if Sadio Mane departs during the transfer window. Reds icon Mane hinted that he could depart on Friday, and is believed to be in discussions over a switch to Bayern Munich.

Mane has just a year remaining on his Liverpool contract and the Reds are likely to prefer receiving a fee for the 30-year-old this summer rather than lose him for free in 12 months’ time. The Senegal international hinted at a transfer while away with his country, saying: “Like everyone else, I’m on social media and I see the comments. Isn’t it between 60 to 70 per cent of Senegalese that want me to leave Liverpool?

“I will do what they want. We will see soon! Don’t be in a hurry because we’ll see this together.”