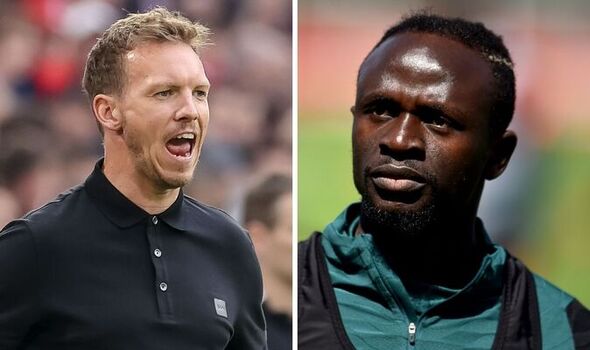 Liverpool star Sadio Mane reportedly expressed an ‘interest’ in joining Bayern Munich after talks were held earlier this week. The Reds have put off contract negotiations with their biggest stars until the end of the season with still everything to play for in the final few weeks.

All the talk over the past few months has been about Mohamed Salah’s future at Anfield with Liverpool so far unable to meet the winger’s demands. The Egyptian is out of contract in 2023, but he’s not the only Liverpool star entering the final year of his contract.

Roberto Firmino too has little over a year left on his deal, along with Mane, Naby Keita and Alex Oxlade-Chamberlain. It appears as though the Englishman will leave while a decision will also be made on Keita’s future.

But keeping Liverpool’s high-flying attacking unit together is a top priority for Jurgen Klopp. The longer Liverpool wait though, the more speculation grows over the futures of their star players.

JUST IN: Wembley blasted for ‘unforgivable’ safety risks ahead of FA Cup final

Mane’s future has recently come under question with Bayern Munich showing an interest in the Senegal international. Reports emerged earlier this week insisting Liverpool have had no contact from Bayern, but it appears as though the Bundesliga club have held talks with Mane’s representatives.

According to Bild, Bayern spoke with Mane’s agent, Bjorn Bezemer, last week and more conversations were held by telephone a few days ago. Mane is said to be ‘interested’ in talks with Bayern as the Bundesliga club targets the Liverpool forward as a possible replacement for Robert Lewandowski.

The Poland international looks set to leave the Allianz Arena and the money used from his sale – possibly to Barcelona – will supposedly go towards a bid for Mane. Mane did appear to hint at his preference to stay at Liverpool this week following their 2-1 win over Aston Villa.

When asked if he had even been happier at Liverpool given his current form in front of goal, Mane said: “Yeah, sure, when we won the trophies I think I was more happy. But I think I just try to enjoy every moment and try to score and assist for my team mates.

“I think it is all about the team or nothing, the boys make it easier for me so I am obviously very happy.”

Mane scored the winner against Villa to take his tally for the season up to 22 goals in all competitions.