Burnley: Liverpool moved into the Champions League qualifying spots after a 3-0 win at Burnley on Wednesday (Thursday AEST) took them above Leicester City and into fourth place with one round of Premier League matches remaining. 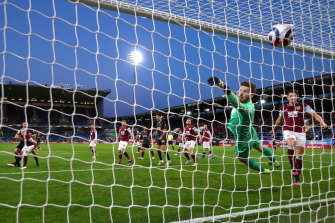 Burnley goalkeeper Will Norris could only watch on as Nathaniel Phillips’ strike put Liverpool 2-0 up and on course for a Champions League spot.Credit:Getty

West Ham’s Declan Rice struck the post with a penalty in the opening minute and the visitors fell behind after 27 minutes when Matheus Pereira’s corner went in off Tomas Soucek.

Soucek made amends, however, by equalising in first-half stoppage time.

Obbonna bundled West Ham in front in the 82nd minute before Antonio wrapped up the points six minutes later.

One point against Southampton on Sunday would secure West Ham a place in next season’s Europa League. 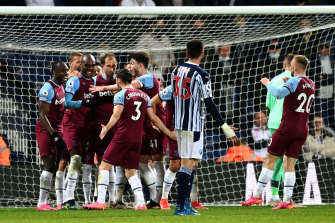 One point from their final game of the season will be sufficient for West Ham to qualify for next season’s Europa League.Credit:Getty

In England’s north-west, Roberto Firmino struck two minutes before half-time and a Nathaniel Phillips header made it 2-0 in the 52nd minute before a superb late strike from Alex Oxlade-Chamberlain secured a fourth straight win.

The victory moves Liverpool onto 66 points, ahead of fifth-placed Leicester on goal difference while Chelsea are third on 67 points.

Burnley enjoyed the better of the first half but the visitors grabbed the lead when Sadio Mane fed Andy Robertson on the left and his low cross was expertly slotted home by Firmino.

Phillips eased any lingering Liverpool nerves with a firm header at the back post from a Mane cross from the left before a fine individual effort from substitute Oxlade-Chamberlain wrapped up the win.

Earlier, Arsenal snatched a 3-1 win away to Crystal Palace thanks to stoppage-time goals from Gabriel Martinelli and Nicolas Pepe, keeping up their slim hopes of playing European football next season.

The late goals spoiled Roy Hodgson’s final home game after four years in charge of hometown club Palace but delighted Arsenal coach Mikel Arteta, who celebrated a fourth consecutive league win which gives his side a fighting chance of sneaking into the new UEFA Conference League next season.

Arsenal’s record signing Pepe gave the visitors the lead against the run of the play 10 minutes before half-time, stabbing home a Kieran Tierney cross after the full-back had been released by a slick backheel from Bukayo Saka.

Palace levelled in the second half when Christian Benteke headed home an Andros Townsend free kick shortly after the hour mark to give the home fans a moment to savour in their first game back this year and their second since the coronavirus pandemic disrupted live sport in March 2020. 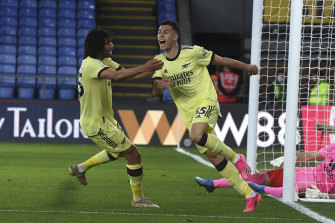 Gabriel Martinelli, right, celebrates the goal which kept Arsenal in the hunt for an unlikely European spot.Credit:EPA

Palace looked the most likely side to go on and take all three points and Wilfried Zaha had a great chance to snatch a late winner but could not dribble past keeper Bernd Leno and Arsenal had the ball in the net moments later with a scrappy finish from substitute Martinelli.

Pepe then clinched the win for Arsenal by slotting low into the net with practically the last kick of the game after bursting through the hosts’ defence.

Arsenal remain ninth in the standings although the win took them on to 58 points with one game left. Palace are 13th on 44 points.

Arsenal host Brighton in their final game with a chance to qualify for Europe, needing a victory and for Tottenham, who lost 2-1 to Aston Villa in what may have been Harry Kane’s home farewell, and Everton – 1-0 victors over Wolves – to fail to win their games, away to Leicester City and Manchester City respectively.

“It was a crucial moment for us as we really wanted to go to the final day with chance of Europe next season,” Arteta said.

“If someone said you have the chance to qualify for Europe a few weeks ago we’d have said ‘you are crazy’ but we’ve got it. Now we have to win our last game and wait and see.”