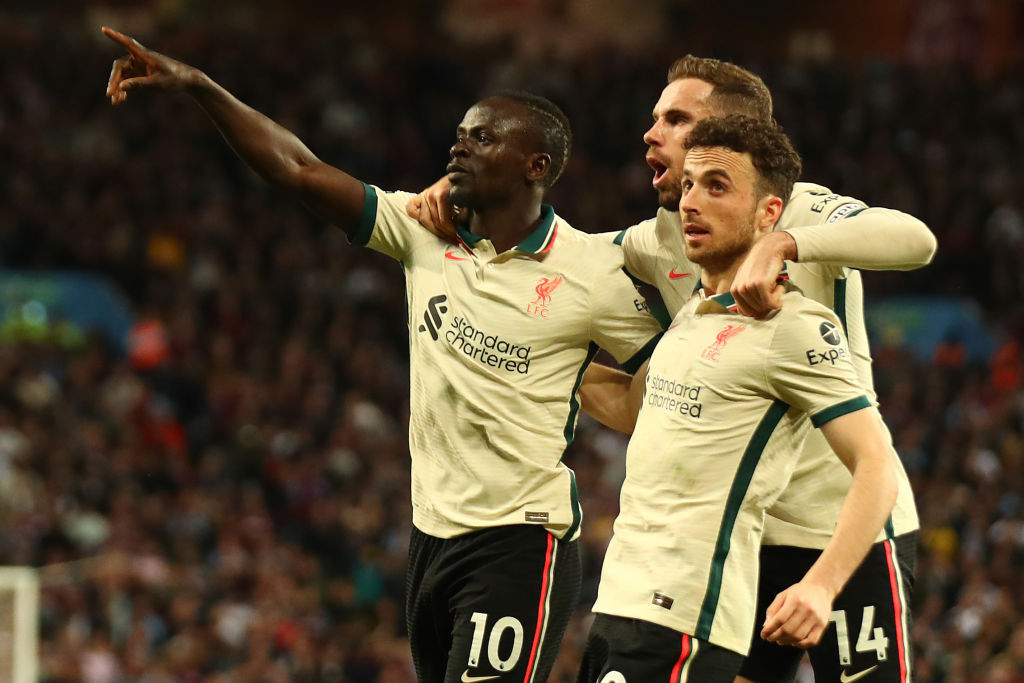 Liverpool just about kept their Premier League title dreams alive with a hard-fought 2-1 win away at Aston Villa on Tuesday night.

The Reds are back level with Manchester City on points at the top of the table, but remain behind on goal difference (by three goals) and have now played one game more than their rivals.

It was a good win for Jurgen Klopp’s men, though, after looking like it was going to be a difficult night out when Douglas Luis put Villa ahead just three minutes in.

Joel Matip equalised just three minutes later but there wasn’t a great deal between the sides over the entire contest, with only a smart Sadio Mane header after 66 minutes proving the difference.

The bad news for Liverpool and Klopp was that influential midfielder Fabinho limped out of the contest 30 minutes in with an apparent hamstring problem.

It was a wild start to the match and Villa were ahead after just three minutes through Douglas Luiz thanks to some ropy defending from the Reds.

Kostas Tsimikas and Joel Matip collided with each other while attempting to deal with a cross, allowing Luiz to get a header on goal, which was saved, but the Brazilian was quickest to the rebound and powered it home.

The visitors could not be accused of panicking after the setback as they were level again just three minutes later, through an even more unlikely scorer in Matip.

Trent Alexander-Arnold hoisted a long free-kick into the box which was not well dealt with by Tyrone Mings and Virgil van Dijk squared to set up his central defensive partner as Matip poked the ball into the net.

The two quick goals did not really settle things down, with Liverpool uncharacteristically ragged, with Alisson Becker and Fabinho notably guilty of slightly mad moments on the ball causing concern for Klopp.

An even bigger concern for the German manager was Fabinho limping out of the contest holding his hamstring half an hour into the game, replaced by Jordan Henderson. Things did not look good for the key midfielder with a Champions League and an FA Cup final to come soon.

Naby Keita had an excellent chance before the break, picked out expertly by Alexander-Arnold in the middle of the box, but he completely missed his kick and the ball bobbled away pathetically.

The second half was much less frenetic, with the pace slowed noticeably, but just as it started to look like a very frustrating evening for Liverpool, one of their star men struck.

Luis Diaz whipped in a low cross from the left and Mane was somehow unmarked in the middle of the penalty area to flick a header past Emi Martinez without even needing to jump.

There will be an inquest in the Villa defence, but the Reds didn’t care as they took the lead on 66 minutes.

Mo Salah joined the fray with 20 minutes to play and was almost through on goal just seconds later, but could not quite get hold of the ball.

Aston Villa had not stopped threatening after going behind and Danny Ings twice seemed to be in on goal, the first was well smothered by Alisson and the second was from a tight angle and forced a save from the Brazilian.

Ings actually was in again and powered a fine finish past Alisson, but the forward was offside.

Substitutes Emi Buendia and Bertrand Traore threatened but Liverpool held on and took the three points, which could still prove huge come the end of the season.