Report as second-half goals from Benjamin Mendy and Gabriel Jesus take Man City 17 points clear at the top of the Premier League; Leicester, who failed to register a shot in the first half, still third

Manchester City were simply too good for Leicester as they continued their march towards the Premier League title with a 2-0 win at the King Power Stadium.

Man City were completely dominant in every area but the scoreline stayed goalless in the first half – coming closest through Kevin De Bruyne’s free-kick off the crossbar – as Leicester failed to register a single shot, touching the ball just once in the opposition box.

The champions elect deserved their opener through Benjamin Mendy (58), only his second goal for Man City, coolly curling home from 12 yards after a smart turn in the box.

Pep Guardiola’s side wrapped up the win through Gabriel Jesus (74), initially played through by De Bruyne’s eye-of-a-needle pass, before exchanging passes with Raheem Sterling at close range and converting at close range.

The result means Man City are 17 points clear of second-placed Man Utd, who have two games in hand, and are a maximum of 11 points away from securing the title. In the race for the top four, fifth-place West Ham will be just four points off Leicester if they beat Wolves on Monday Night Football.

How Man City turned it on to break Leicester

Six of Man City’s starting XI didn’t take part in international duty, as Pep Guardiola made another four changes, taking their tally of starting XI changes to 98 this season, more than any Premier League side.

The visitors thought they’d taken the lead in the opening minutes as Fernandinho’s 25-yard effort found the bottom corner, but Sergio Aguero was in an offside position and in the eyeline of goalkeeper Kasper Schmeichel.

Man City were governing the ball in the first half – in one six-minute period, they had 100 per cent possession, and the Foxes didn’t complete a single pass – as Leicester struggled to get out of their half. As De Bruyne said after the game: “Only one team was playing”. 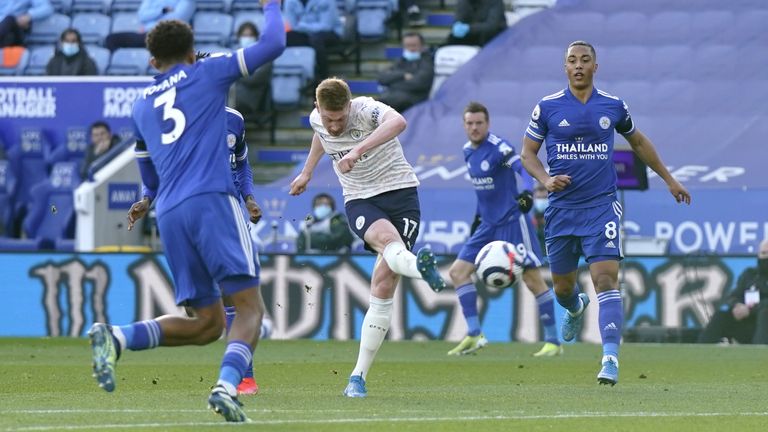 The game was following a similar pattern to the opening stages of their 5-2 win at the Etihad in September, where Leicester sat back and coerced Man City into overcommitting, but the result was different this time against a more savvy Pep Guardiola side.

De Bruyne struck a free-kick that he had fortuitously won against the bar from the edge of the box and Riyad Mahrez’s low effort from a clever Gabriel Jesus flick was saved by the feet of Schmeichel, but Leicester kept the leaders at arm’s length without posing any threat themselves.

Leicester’s only moment of the first half came in stoppage time as Jamie Vardy rounded Ederson and converted from Ayoze Perez’s throughball, but the offside flag was up to correctly deny him.

Man City were making “the third team in the Premier League look like they are from the league below” with their dominance, according to Sky Sports’ Jamie Redknapp, but Leicester did start brightly in the second half.

After Fernandinho lost the ball in midfield, Kelechi Iheanacho released Youri Tielemans at a slight angle on the right of the box, and his low, goalbound effort was brilliantly blocked by Ruben Dias. 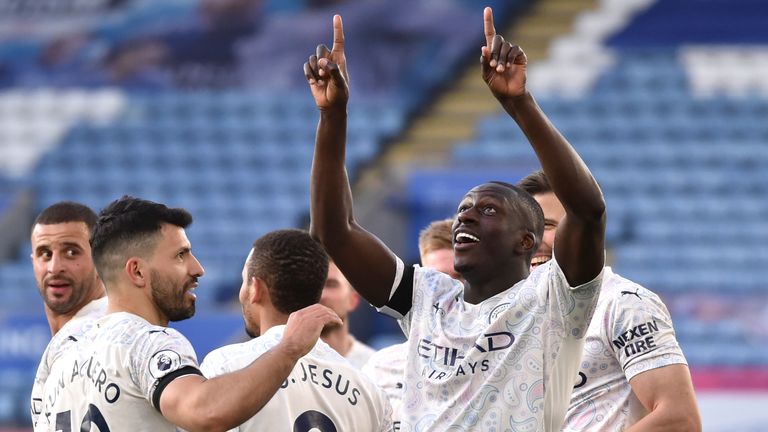 Man City finally made the breakthrough just before the hour mark through an unlikely source, the ball breaking to Mendy in the box before the Frenchman composed himself, turned Marc Albrighton and curled right-footed into the bottom corner from 12 yards.

Though he didn’t get the assist, De Bruyne played a huge part in the second, playing Jesus through with a world-class threaded pass. Jesus squared for Sterling, who returned the favour by sitting Ricardo Pereira down and feeding Jesus to poke home until an empty net from close range. De Bruyne should have had an assist moments later as he slipped through Mahrez one-on-one with Schmeichel, but the former Leicester man stuck his clear chance wide.

Brendan Rodgers was without Caglar Soyuncu as Daniel Amartey started in defence while Marc Albrighton started in place of Ricardo Pereira, meaning Timothy Castagne dropped into his more familiar position at left-back.

James Maddison was fit enough to make the bench, as was the 21-year-old French youth international Thanawat Suengchitthawon.

Sergio Aguero started for Man City as Pep Guardiola made four changes to his side from their last Premier League outing at Fulham three weeks ago.

The scoreline by no means flattered Man City. They showed the shrewd and ruthless edge they were missing in September’s heavy defeat to Leicester, which came a day before the £65m investment in Ruben Dias, who was imperious again on Saturday. Leicester, meanwhile, will be hoping this isn’t the start of a similar slump that saw them fall out of the top four last season.

Leicester now go to West Ham next Sunday, live on Sky Sports Premier League at 2.05pm, while Manchester City host Borussia Dortmund in their Champions League quarter-final first leg at 8pm on Tuesday, before hosting Leeds in the Premier League at 12.30pm on Saturday.