‘The proudest moment of my life… I just can’t stop crying’: Skipper Leah Williamson leads the home party as England finally celebrate a major triumph after beating Germany at Euro 2022

England captain Leah Williamson described winning the Euros as the ‘proudest moment of her life’ after leading her side to the country’s first major tournament triumph since 1966.

Williamson, who was only given the armband by manager Sarina Wiegman in April, could not hold back her emotion after the Lionesses’ extra-time victory over Germany. 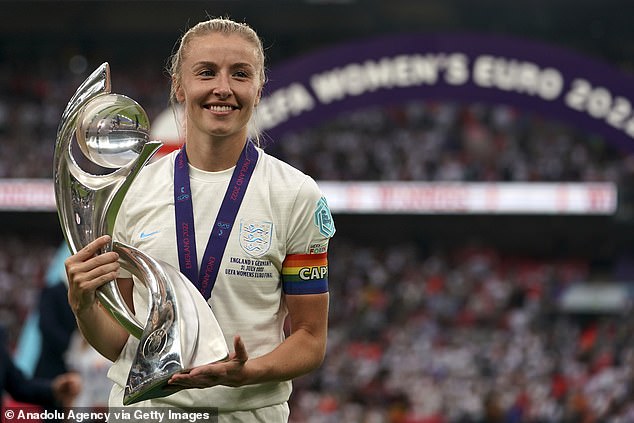 ‘It is the proudest moment of my life. I am taking everything in, every piece of advice I had was to take every single second in, so I can relive it for ever. I’ll be reliving that for a long time.

‘What we’ve done is really incredible,’ Wiegman said after her players returned to the dressing room. ‘We’ve had so much support from our fans. I think we’ve done an incredible job. I’m so proud of the team.

‘I hope that things work out, that was one of my personal challenges. Can I bring people together from another culture? First staff, then players. 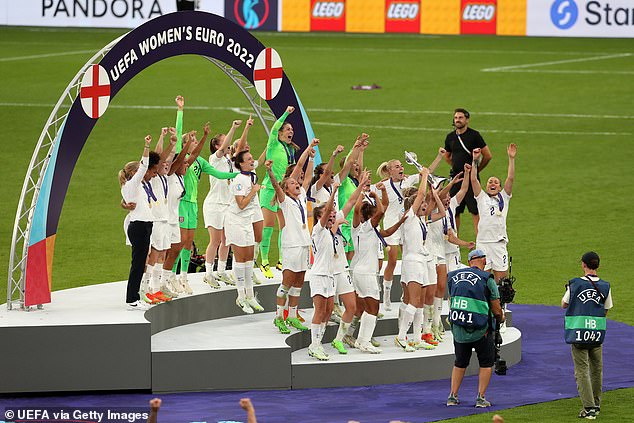 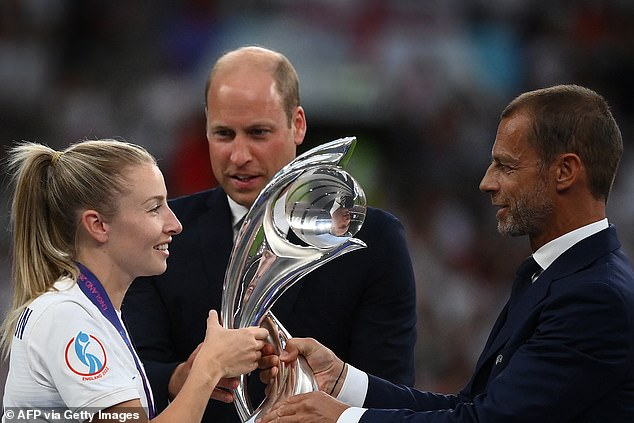 ‘It’s something you dream of, you hope of, it’s really nice when it works out. We just won it and for me personally I have won it now for the second time in a row.’

Wiegman acknowledged that there will be higher expectations when England go to the World Cup in Australia and New Zealand next year.

‘Now the expectations will go through the roof!’ she admitted. ‘We have all seen, the development of this game has gone so fast. Many countries could win this tournament, we’ve all seen that.

‘It’s not easy to win this tournament and that’s going to be (the case) next year at the World Cup. The countries just underneath the top countries have developed.

‘The expectations here were higher than with the Netherlands because England already made it to a semi-final three times in a row.

‘This team was very far in development. The whole country came behind us, in the stadiums and outside the stadiums. I think this tournament has done so much for the game but also for society across Europe.’ 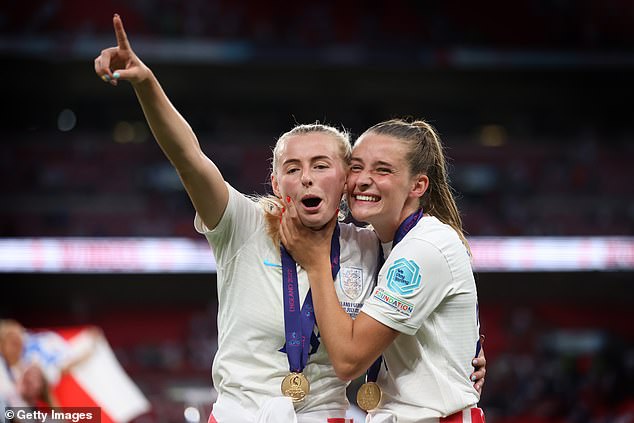 Wiegman’s sister passed away in June and the manager was forced to delay her squad announcement to travel back to the Netherlands.

‘I’m kissing this little armband which was my sister’s and my sister passed away,’ she said. ‘I think she was here, she was the crossbar (when Germany hit the woodwork). She would have been here. She went to every game. She would be really, really proud too.’

Chloe Kelly came off the bench to score the winning goal in extra time and took her shirt off as she wheeled away in celebration.

Kelly missed 11 months with a serious knee injury but managed to force her way into Wiegman’s 23-player squad with strong performances at the end of last season.

‘Oh my god, look at them (the fans), it’s amazing. Thank you to every single person who came out to support us, this is unreal,’ Kelly said before grabbing the BBC microphone and singing Sweet Caroline.

‘This is what dreams are made of. As a young girl watching women’s football… now this, wow it’s unbelievable. Thank you to everyone who played a part in my rehab because I always believed I could be here. But to score the winner, wow. 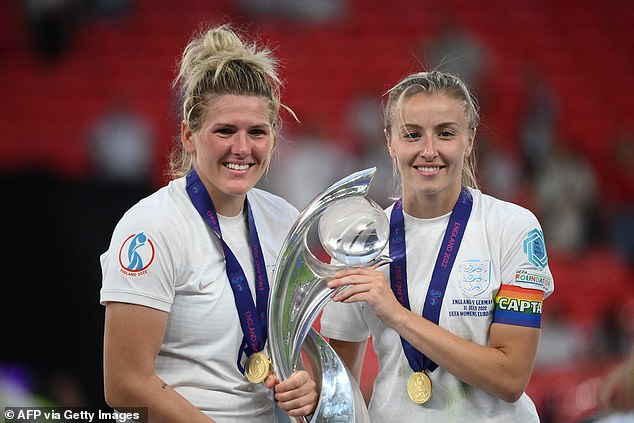 ‘These girls are special, the manager is special and what a special group of staff. This is amazing. All my family are in the crowd. My mum, all my brothers, my sister, all my nephews, everyone. I just want to celebrate.’

Germany boss Martina Voss-Tecklenburg believed her side should have had a penalty when the ball hit Williamson’s hand in the first half but said the Lionesses were deserved champions.

‘There was a situation at 0-0 where there was a clear handball in the box,’ she said.

‘VAR looked at it and didn’t award a penalty. Why did the communication not work well? Why didn’t the referee look at it? That hurts a bit because that would have given us more safety if we had scored.

‘There are decisions that aren’t correct, but in this level, the European Championship final, it shouldn’t happen. I am asking the question and I’d like to have a discussion about that. If it happened to them (England) I would not be content either.