Garang Kuol is surely bound for the World Cup after another stunning performance for the Central Coast Mariners in their 3-0 win over Western Sydney Wanderers, but teammate Jason Cummings may have flunked his final Socceroos audition before Graham Arnold names his 26-man squad.

Introduced in the 63rd minute, teenager Kuol once again made an instant impact for the Mariners in one of his final appearances for the club ahead of his January transfer to Premier League club Newcastle United, laying on the assists for their first two goals from Michael Ruhs.

It wasn’t an audacious shot, moment of trickery or a daring run down the flank that yielded the first but a piece of sheer grit. Just a few minutes after coming on as a substitute at CommBank Stadium, Kuol dispossessed Wanderers defender Ruon Tongyik, who was trying to play out from a dangerous position near the Mariners’ attacking area. 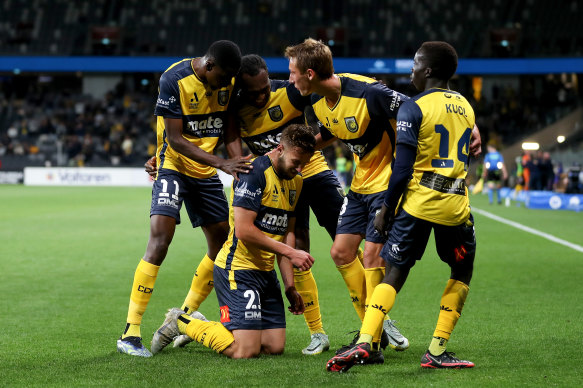 The ball from his lunge tackle trickled into the path of Ruhs, who was subbed in at the same time as Kuol, and he made no mistake with just his second touch of the game.

But there was more where that came from. Kuol repeated the dose in the 72nd minute, and Ruhs was again the beneficiary, slamming home the 18-year-old’s perfectly weighted cutback from close range.

It was no less than what the Mariners deserved after a dominant display of attacking football away from home – and it will only add to the already incredible hype surrounding Kuol, who has repeatedly shown he is capable of living up to it.

Arnold will reveal his World Cup squad on Tuesday afternoon and, despite still not having started a game at A-League level, Kuol could not have done more to advance his claims and genuinely looms as one of Australia’s best available attacking weapons.

Cummings, however, may not be so fortunate after missing a golden one-on-one opportunity to score, which could prove very costly in Arnold’s eyes.

A consistent performer for the Mariners since joining them in January, Cummings proved his class with a hat-trick of assists, a goal and two more that were disallowed in their comeback win over Western United a week ago.

The 27-year-old needed to repeat that sort of performance – or at least find the back of the net – to give himself the strongest possible chance of making the cut for the Socceroos.

He had his moment early in the second half when a wonderful lobbed pass from Nectarios Triantis put Cummings through on goal with only Wanderers goalkeeper Lawrence Thomas to beat. However, the Scottish-born striker fluffed his lines, couldn’t get the ball out from under his feet, and had it taken off him by Western Sydney skipper Marcelo.

Cummings also had a shot saved by Thomas in the first half and hit the woodwork in injury time so could be considered somewhat unfortunate to not have taken more out of the game individually, especially since he also set up the Mariners’ third goal, a long-distance effort from youngster Sam Silvera.

Unless he has a change of heart, Arnold plans to name three out-and-out strikers for the World Cup, and, with Mitchell Duke and Jamie Maclaren, who bagged another two goals for Melbourne City earlier on Saturday, seen as certainties, the last spot could be a battle between Cummings and 16-cap Socceroo Adam Taggart, who didn’t feature for Cerezo Osaka on the final day of the J1.League season.

In the afternoon A-League match, Melbourne City smashed a hapless Perth Glory 4-0, with their three main Socceroos contenders all getting on the scoresheet.

Maclaren’s double included one from the penalty spot, taking his season tally to seven goals from just five games, while Marco Tilio and Mathew Leckie added the others in the final 10 minutes.

Tilio could have also had a brace of his own, having created the chance for City’s opening goal, but failed to pull the trigger, with Maclaren pouncing on the loose ball that spilled his way after he was tackled.

Tilio, 21, is an outside chance of making the squad but is likely competing with Kuol for a role as an impact player off the bench.