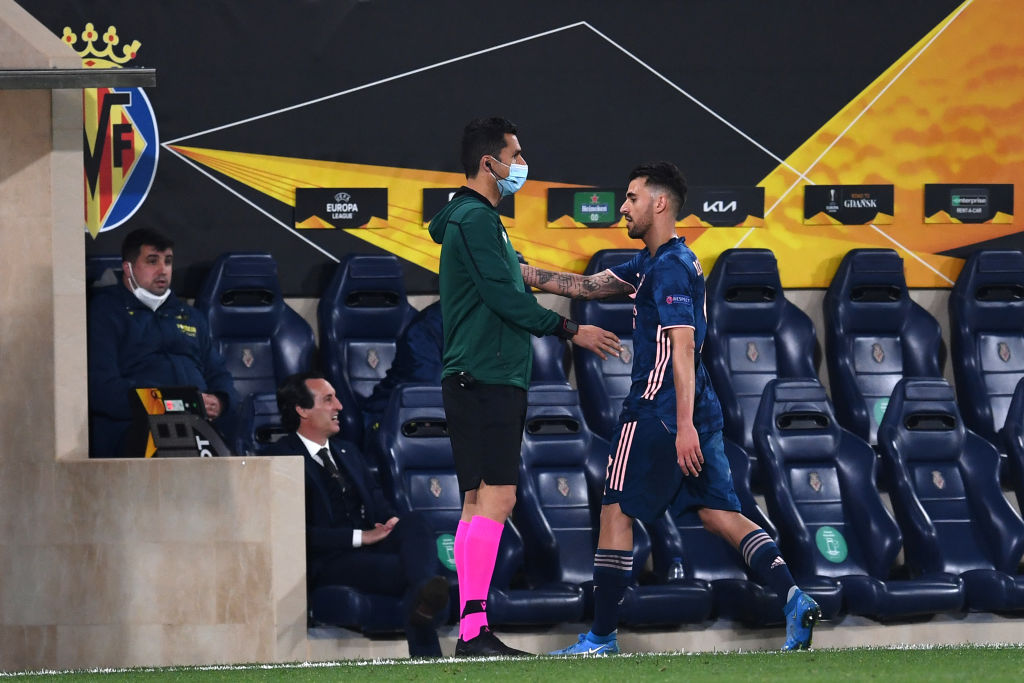 Martin Keown said Dani Ceballos looked ‘out of his depth’ after Arsenal’s 2-1 defeat to Villarreal and questioned Mikel Arteta’s decision to select Granit Xhaka as a makeshift left-back for the Europa League semi-final first leg.

Goals from Manu Trigueros and Raul Albiol stunned Arsenal in the opening half an hour and Villarreal were cruising as Ceballos was given his marching orders for a second bookable offence in the 57th minute at the Estadio de la Ceramica.

But an inspired Bernd Leno kept the visitors in the tie with a superb reflex save to deny Gerard Moreno and Nicolas Pepe converted from the penalty spot to reduce the deficit after Bukayo Saka was fouled inside the box in the 73rd minute.

The hosts were also reduced to ten men as ex-Tottenham man Etienne Capoue was shown a second yellow card while being stretchered off the pitch and the scoreline remained the same to set up an enticing second at the Emirates next week.

‘I think Arsenal have got away with one there tonight, without a doubt,’ former Arsenal and England defender Keown said.

‘Bernd Leno makes a couple of outstanding saves when the game should be out of sight. We’ve spoken about Xhaka getting exposed at left-back, that came to pass. We didn’t want it to happen but it did.

‘And really Ceballos in that midfield, he’s made a catalogue of mistakes in this competition so far.

‘I do feel that he was unlucky for the second booking but his reward for those mistakes was a start in the semi-final and he looked like he was out of his depth today.

‘There was a huge hole in middle of that midfield right in front of Xhaka and it was a massive weakness that Emery really exploited.’

Kieran Tierney’s absence saw Xhaka start at left-back – as he had done in Arsenal’s defeat to Everton – and Keown felt it was the wrong call from Arteta, with the Switzerland international struggling across the 90 minutes.

‘It’s the actions of a player that is not comfortable in that position and it’s the manager that has put him there,’ he added.

‘It’s about the decisions of the manager. It’s not Xhaka’s fault by the way.

‘I do believe he’s the most improved player we have. He’s still had a difficult time but to play him at left-back leaves him exposed for me.’

Keown hopes Saka is given the nod at left-back instead of Xhaka for the second leg, despite the fact the England youngster was Arsenal’s go-to man in attack on Thursday evening.

‘It’s about the manager creating the strongest fist he can as a team with what’s available,’ he went on.

‘Saka was picked to play for England in the November World Cup qualifiers as a left-back.

‘We know know he’s in the squad as a forward player but that’s how versatile he is so play him at left-back.

‘Then [Gabriel] Martinelli can play, Pepe can play. There’s still plenty of talent but it’s a better XI.

‘And I felt when Ceballos went off what was really telling was we didn’t look any worse down to 10 men than we did with 11. That should tell the manager something and he has to learn quickly because we’re running out of time now.

‘There has to be a performance in the next game.’