Kelechi Iheanacho has signed a new three-year contract with Leicester, keeping him at the King Power Stadium until 2024.

The Nigerian striker has been rewarded after scoring seven goals in his last four games in all competitions, a run of form that saw him win the Premier League Player of the Month award for March.

He has nine goals in his last nine games – having failed to score in his previous 12 matches – and netted his first Premier League hat-trick in the 5-0 win over Sheffield United on March 14.

“It’s been a great time here. It’s not been easy, but there’s a lot of people here that are good people, great people to work with. They are nice people and they make me feel comfortable and welcome since I came in.

“It’s been really great being here. It’s like a family. I’m happy being here and hopefully I can stay here many more years.”

Iheanacho joined Leicester from Manchester City in 2017 and has gone on to score 32 goals in 117 games for the Foxes.

Incidentally, his new deal comes on the same day that he is set to play against his former club, with Leicester hosting Manchester City on Saturday, live on Sky Sports.

Rodgers on how Iheanacho found form

Jamie Vardy has been the scourge of Manchester City over the years, scoring a hat-trick in Leicester’s 5-2 win at the Etihad Stadium in September to take his total of goals against the Premier League leaders to 11. But there is another forward to watch out for on Saturday.

Kelechi Iheanacho will also be hoping to feature against his former club while in the form of his life. Seven goals in four games have turned his season around and reinvigorated Leicester just at the point when injuries looked like they might begin to take their toll. 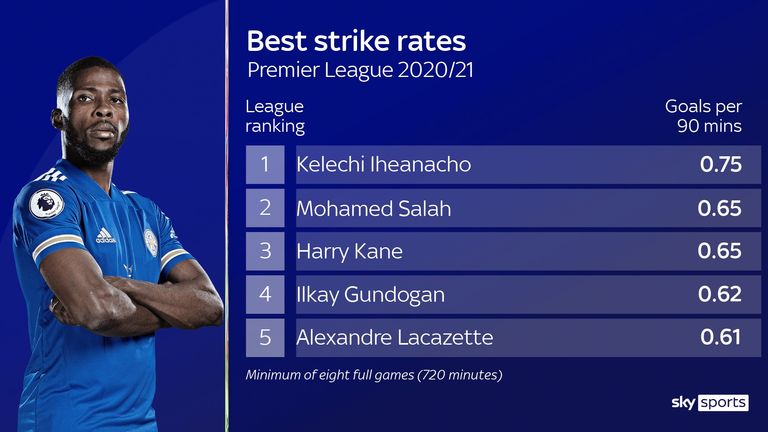 Brendan Rodgers is clearly delighted. “Since he has come into the team he has just been fantastic,” he tells Sky Sports. “I am delighted for him because he is such a conscientious guy, such an honest guy, and as you can see now, a very talented player.

“If you think of his journey, he has been the young player at Manchester City after being the player of the tournament at the Under-17 World Cup. He breaks in, scores some goals, but there are gifted players ahead of him so it is difficult to get that game time.

“He then makes a move to Leicester where he has Jamie Vardy here, one of the top strikers in the Premier League. Plus, you have the adaptation of leaving Manchester City and coming to another club so that is always going to take that bit of time.

“I know when I came here that there were probably times when there were grumbles if he was playing but he has very quickly won over people. That is just through hard work, resilience and talent. What you are seeing is a young player at the top of his game.”