Jurgen Klopp wanted to set the record straight on his opinion of Gareth Soutgate’s decision to leave Trent Alexander-Arnold out of the Engand squad after the right-back put in a stellar performance in the 3-1 win over Arsenal on Saturday with the Reds keeping their top-four hopes alive. Klopp described the final few games of the campaign as a ‘mini season’ for Liverpool in their aspirations to finish in the Champions League places.

It begun with what could have been a tough away game at the Emirates – a place where Liverpool hadn’t won since 2016.

And Liverpool’s form since the turn of the year has been so unpredictable that a poor result wasn’t out of the realm of possibility.

But Liverpool started the game on the front foot and never looked like being threatened by Arsenal in the slightest.

James Milner and Roberto Firmino came close in the opening 45 minutes with half chances as Liverpool tried to break down Arsenal’s defence.

JUST IN: Arsenal fans fear the worst as Kieran Tierney hobbles off with injury 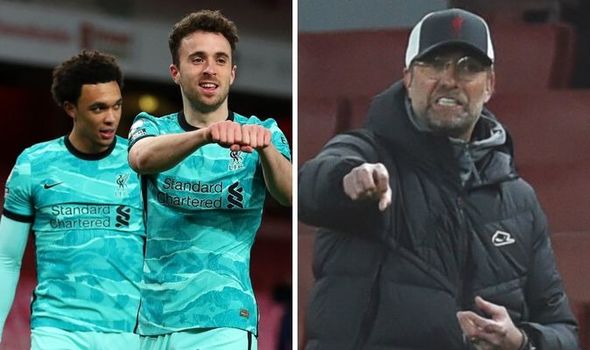 And the breakthrough came in spectacular fashion In the second half when Diogo Jota was brought on.

Just minutes after his introduction, the Portuguese forward was on the scoresheet as he nodded in from a beautiful Alexander-Arnold cross.

Mohamed Salah would go on to double Liverpool’s lead before Jota rounded off the win with his second of the night.

The win pushes Liverpool up to seventh in the table and just five points behind Chelsea with eight games remaining.

Klopp admits that a top-four spot remains out of their hands, but the performance against Arsenal puts them in a good position to kick on.

“We don’t look at Chelsea, West Ham or Leicester because we have to win our own games,” Klopp said.

“But in our situation, other teams have to lose games as well because we cannot do it ourselves.

“We don’t play Chelsea anymore or Leicester but we have enough games and we have a tough programme so we don’t have to start dreaming.

“We have to keep working and that’s what we will do. 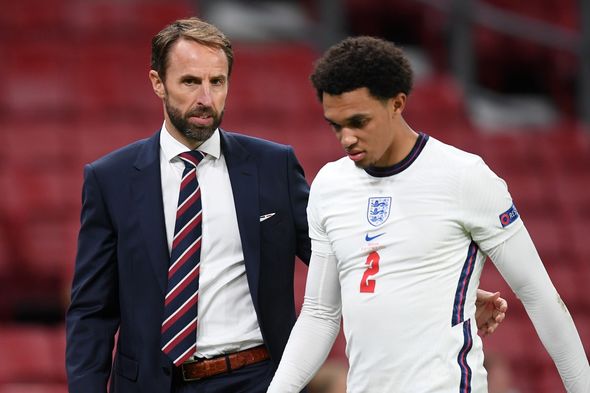 “It’s a nice sign though. We are still there. Even in the games where we lost some, we were not bad, but tonight the package was extremely good and that’s what you need.”

The Liverpool boss also made a point to clear the air on comments about Southgate leaving Alexander-Arnold out of the latest England squad.

“I don’t want to make a funny discussion about Trent,” Klopp said.

“It’s Gareth’s decision and he is pretty much blessed with the choices he has in that position especially.

“But Trent is in good shape and if somebody says he’s not then I have to say that’s wrong and that’s all.