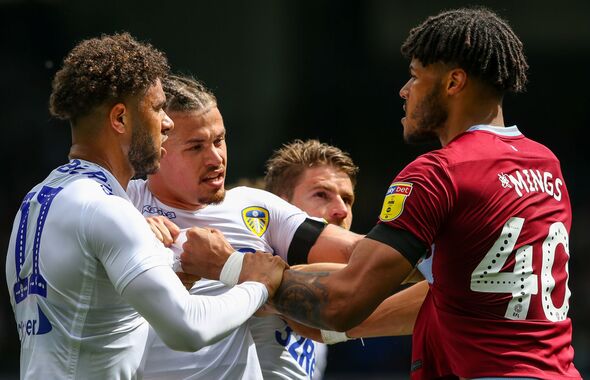 Aston Villa clash with Leeds on Friday night four years after the Battle of Elland Road that saw a red card, a mass brawl, and two controversial goals. Chelsea icon John Terry – who was then assistant manager at Villa – appeared to square up with Leeds boss Marcelo Bielsa on the side of the pitch as tensions got the better of the Championship promotion hopefuls.

The chaos was prompted by Leeds refusing to kick the ball out of play when Villa attacker Jonathan Kodjia went down injured. The Villans seemed to stop, expecting the game to come to a halt.

Football’s rules advise that stoppages are at the discretion of the referee, but the conventional move is for the ball to be kicked out when a player is injured. So when Leeds raced up the other end of the pitch and scored through Mateusz Klich, a mass brawl broke out between the players on the pitch and individuals from both technical areas.

In the middle of the melee, which included future England internationals Jack Grealish, Kalvin Phillips and Tyone Mings, Villa forward Anwar El-Ghazi appeared to swing an elbow in the direction of Patrick Bamford. The Leeds striker fell to the floor under minimal contact but the assistant referee advised the official to send-off El-Ghazi.

The ban was later transferred to Bamford for feigning injury, with El-Ghazi cleared of wrongdoing. But the madness did not end there as the incredible scenes continued at Elland Road.

On the touchline, Villa assistant Terry had furiously sprinted to the Leeds dugout to confront their staff about not kicking the ball out of play. The former England defender could be seen furiously pointing his finger and screaming at Bielsa.

In a remarkable moment, the eccentric Bielsa sensationally demanded his players to allow Villa to run straight through on goal to make the score 1-1. Albert Adomah raced away unopposed by almost every Leeds player apart from Pontus Jansson, who had taken it upon himself to defy his manager’s orders – furious at having to concede a goal. Jansson’s efforts were futile though as Adomah rolled the ball into a empty net.

Another scuffle broke out before order was largely restored for the remainder of the contest. Villa defender Tyrone Mings told Sky Sports: “We were disappointed because we kicked it out for them (earlier in the game).

“They were saying ‘oh well it wasn’t a head injury’, but fair play to their manager for saying we could go and score a goal. It evened itself out, it was disappointing but that’s football.”

Bielsa added: “We gave the goal back. The facts are what everyone saw. English football is known for sportsmanship so I don’t have to comment on this kind of thing, which is common in England.”

The game, played in April 2018 as both sides chased promotion to the Premier League finished 1-1. They both qualified for the play-offs, with Leeds defeated in the semi-final by Frank Lampard’s Derby.

Villa won promotion after beating Derby in a thrilling final at Wembley. Leeds followed them up a year later, winning the Championship in the Covid-hit 2019-20 campaign.