Jamie Carragher has opened up about what he and Gary Neville experienced during Manchester United fans’ protest at Old Trafford. Carragher and Neville were working for Sky Sports ahead of United’s Premier League match against Liverpool on Sunday when around 200 protestors managed to gain entry to the stadium.

United fans were protesting against the club’s owners, the Glazer family, at Old Trafford and outside the players’ hotel, the Lowry Hotel, when a group got into the stadium.

In a statement released on Monday afternoon, United said fans got in by “breaking through barriers and security”, while others “climbed the gates at the end of the Munich tunnel, then forced access to a side door”.

Once inside the stadium, fans gathered on the pitch to make their voices heard, while some set off flares and, according to the club, caused criminal damage.

The game, which was supposed to kick off at 4.30pm, was delayed and eventually called off by the clubs, in conjunction with the Premier League and the police.

Sky Sports were supposed to be broadcasting the game but instead ended up covering the protest, via their pundits Graeme Souness, Roy Keane and Micah Richards.

JUST IN: Liverpool and Chelsea agree about Sancho as Man Utd set for battle 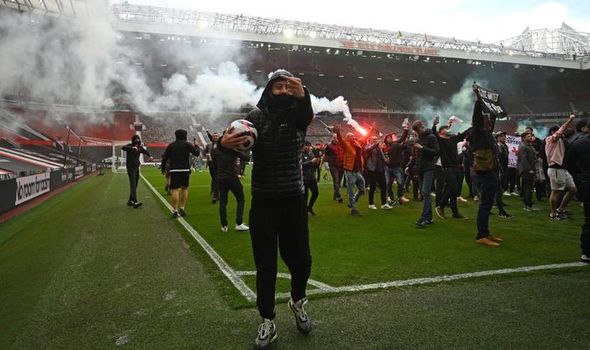 However, it was former Liverpool player Carragher and ex-United defender Neville who were closest to the protest, down by the pitch at Old Trafford.

Both spoke extensively about the protest and its moviations on Sunday, but in his column for the Telegraph, Carragher has gone into more detail about the pair’s experience.

“I stood on the touchline at Old Trafford, shocked as a couple of hundred United supporters made it onto the pitch,” he wrote.

“I never felt threatened. There was a sense of revolt and mutiny within the stadium, not violence.

“Those fans who spoke to me and my Sky Sports colleague Gary Neville felt their voices had been ignored for too long and wanted to make their point in the most effective way possible, knowing the game was to be broadcast around the world.

“Gary and I spoke on the basis of what we saw and experienced. We did not have all the details of incidents outside the ground, or what might have been happening near the United team hotel which meant the safety of the players could no longer be guaranteed.

“Nevertheless, as an ex-Liverpool player and supporter, I was not prepared to go on live television and condemn United fans for being at the end of their tether when many of them have spent over a decade campaigning to raise awareness about how their club is run. I would be a hypocrite to do so.”

Carragher also reiterated his stance of broad support of the United protesters and described the club’s involvement in the controversial European Super League plans as being the catalyst for fan anger.

“The division between the Glazers and United fans has grown to such a harmful extent it was obvious it was going to take more than green and gold scarves to send a powerful message,” he wrote.

“When you push your fanbase too far, there is bound to be a reaction.”

United said the club had “no desire to see peaceful protestors punished, but will work with the police to identify those involved in criminal activity, and will also issue its own sanctions to any season ticket holder or member identified, per the published sanctions policy.”