‘It’s an honour’: Why Socceroos’ new Scottish larrikin is set to have last laugh

Jason Cummings is always up for a joke. But when it comes to his reputation on the pitch, and how he’s perceived as a player, the Socceroos’ new larrikin is deadly serious, and fiercely protective.

Largely dismissed in Scotland as a washed-up never-was – a guy who had the talent to play at the highest level, but wasted his chance to do so – the 27-year-old is now looking back at his homeland, wearing his adopted country’s colours, and is poised to have the last laugh. 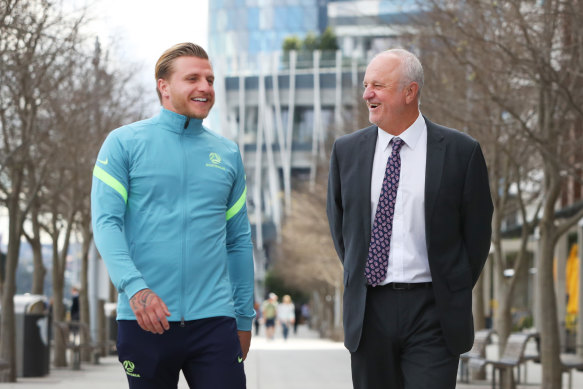 Growing up, Cummings always had the ambition to play at a World Cup but never got the opportunity – largely because Scotland have only reached football’s biggest stage on one occasion in his lifetime, at France 1998. And he was three.

When his professional career finally kicked off, some coaches just didn’t take a liking to him. Cummings can take some of the blame for that, but not all of it. He reckons his rambunctious, freewheeling attitude, his wider perception as a bit of a “daftie”, and his natural tendency to revert to banter in quieter moments made him an easy target for frustrated managers whenever he had a slightly off game.

Since moving to Australia and joining the Central Coast Mariners, for whom he scored 10 goals in 21 games last season to rocket into Socceroos calculations, Cummings has successfully mixed the on and the off-field parts of his life, in a way he never could manage back home.

“I’ve heard that my whole career, you know. Especially in Scotland – it’s not as bad over here, in Scotland it’s ten times worse for that. I think a lot of people in Scotland forgot me as a player,” he said.

“I’m more remembered about my personality and things, from interviews or whatever. My main focus, really, was to come to Australia and do the talking on the pitch. I’ve come over here and started again, a clean slate, I’ve reinvented myself in Australia and the A-League, and I’ve been rewarded with this call-up.

Why change a winning formula? Capped twice for Scotland, for a handful of minutes in total in friendlies against the Netherlands and Hungary in 2017 and 2018, Cummings thought international football had long passed him by.

But his mother was born in Australia, his brother lives in Perth, and like former Hibernian teammate Martin Boyle, that gave him a back door to the Socceroos.

“Scotland never qualify for World Cups. I always had in the back of my head, coming to Australia and playing for the national team,” he said.

“I actually remember speaking in Boyler about it, years and years ago – we used to speak of it all the time. It was good to get a couple of caps for Scotland, obviously that was an honour for me as well. But it’s kind of not worked out for me in Scotland.

“I love Australia. It’s an honour to be here. Obviously, with my mum being born here and stuff, and my brother being here, we’ve always had a nice soft spot for Australia. Even my mum’s house is full of Australia merchandise. It’s a big part of our family.”

And Cummings has been welcomed with open arms into the Socceroos family, which after two years of COVID chaos, is starting to feel like an actual family again. On Tuesday, he was part of a group of players that visited Mitchelton FC, which was ravaged by Brisbane’s floods earlier this year, for an autograph signing and meet-and-greet session with junior players.

“He’s a legend,” said goalkeeper Mitch Langerak. “Guys like him and Boyler, Harry [Souttar], with that with a strong accent but playing Australia, I love it. It brings like another dynamic. These guys are such big personalities, like Jason, it definitely brings out like a good atmosphere combined with our team.”

Cummings is still facing an uphill battle to overtake incumbent strikers Jamie Maclaren, Adam Taggart and Mitchell Duke to earn a spot in Graham Arnold’s final 26-man World Cup squad, and Thursday’s friendly against New Zealand in Brisbane – plus the rematch in Auckland three days later – is his big chance to impress. But at his age, Cummings could also play a part in the following World Cup cycle.

“For me, personally, anyway, there’s no friendlies in football at all. Even pre-season just now with the Mariners, I go into those games personally like they’re World Cup finals. I want to go into every game, score as many goals as I can and do the best I can. Nothing really changes,” he said. “I’ll be going into these games, hopefully, I can get on the pitch and the rest will just take care of itself.”