‘It was to thank Australia’: Refugee Socceroo dedicates penalty to new home

Before slotting what would be the eventual winning penalty against Peru, Socceroos winger Awer Mabil took a long pause before starting his run-up. He wasn’t just going through his process, thinking of where to aim for or playing a mind game with the goalkeeper Pedro Gallese.

Instead, what went through his mind were thoughts of his family, the opportunities Australia has provided them and how this kick was his way of showing gratitude for the life his new home had provided him.

Mabil was born in the Kakuma refugee camp in Kenya. His family had fled the civil war in Sudan and the camp would be home for the first 10 years of his life. There, football would be his daily respite from the hardships. When his family’s refugee status was approved in 2006 and he moved to Adelaide, he dared to dream of turning his passion into a profession.

“I knew I was going to score. It was the only way to say thank you to Australia on behalf of family,” he said after the match.

As the Socceroos were singing on the team bus, wildly celebrating the qualification few in the game expected them to achieve, Mabil admitted to holding back tears after the shootout as he reflected on his and his family’s journey to Australia.

“I was born in a refugee camp,” he said. “Obviously my family fled Sudan because of the war. I was born in a hut, a little hut. My hotel room here is definitely bigger than the hut, the room we had as a family in that refugee camp.” 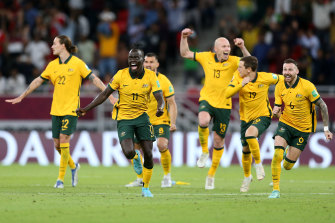 “For Australia to take us in and resettle us, it gave me and my siblings and my whole family a chance at life. That’s what I mean by thanking Australia for that chance of life, that chance of opportunity they allowed my family.”

The 26-year-old has been one of the great recent success stories of Australian football. Having left Adelaide United for Europe in 2015, he flourished into a first-team regular in the Champions League with Danish club Midtjylland and will play in Spain’s La Liga next season after securing a move to Cadiz.

His winning penalty on Tuesday only continued that rise. Having played a role in getting the Socceroos to a fifth successive World Cup, he hopes to inspire other refugees in Australia and frame the narrative around those who come to the country to seek asylum.

“I think now I might have a little impact on Australian football,” he said.

“I scored, a lot of my teammates scored, everybody played a part and maybe that refugee kid played a big part.