Sir Alex Ferguson and David Beckham did not always see eye-to-eye with each other at Manchester United – but in February 2003 their relationship broke down irretrievably.

The England star made 394 appearances under the legendary Scot, but in Beckham’s latter years at Old Trafford, Fergie became unhappy with the winger’s professionalism – or lack thereof – amid his celeb status and marriage to Spice Girl Victoria.

Things came to a head in February 2003 when Ferguson gave his team the famous hairdryer treatment after United crashed out of the FA Cup against Arsenal.

Fergie was in full flow, but no-one could have foreseen what happened next.

Mid-rage, the United boss kicked a boot lying on the floor out of sheer frustration which went flying straight at the head of Beckham.

Ferguson could probably not have managed it again if he tried, but for Beckham the damage was done. Goldenballs required stitches above his eye and the story was across every newspaper the next day.

The incident prompted the midfielder’s mega-money move to Real Madrid the following summer, but what really happened on that fateful afternoon inside the United dressing room?

Initially Ferguson tried to laugh off the incident, saying: "It happens all the time in a dressing room. You get upset.” "This was one of those freak acts of nature and it's over now. It was a freak occurrence that will never happen again."

Reflecting further, the former Red Devils boss gave his take on the drama in his autobiography, explaining: "He was around 12 feet from me.

“Between us on the floor lay a row of boots. David swore. I moved towards him, and as I approached, I kicked a boot.

"It hit him right above the eye. Of course, he rose to have a go at me and the players stopped him.

Beckham gave his own take on events in his 2003 autobiography ‘My Side.’

He said: “The boss took a step or two towards me. There was a boot on the floor. He swung his leg and kicked it. At me? At the wall? It could have been anywhere, he was that angry now.

“I went for the gaffer. I don't know if I've ever lost control like that before. Suddenly it was like some mad scene out of a gangster movie.”

Diego Forlan, a United player from 2002 to 2004, was also in the dressing room. After retiring, he spoke about how the pair had to be separated following the altercation. 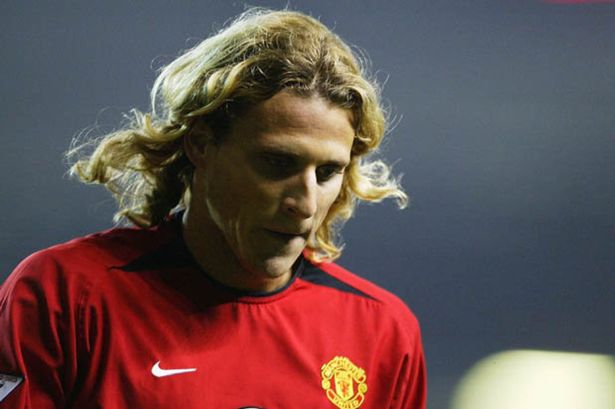 “We all saw the blood and thought 'no, that didn't happen' but within a moment both men were getting ready to fight”, Forlan said.

“That was when Roy Keane and Van Nistelrooy stepped in to separate them.”

Not all of United’s players were quite as shocked as Forlan, though, with some reportedly laughing at incident.

Nevertheless, the damage was done and at that stage all parties knew it was the end for Beckham at Old Trafford.

“The next day the story was in the press,” Ferguson continued. “In public an Alice band highlighted the damage inflicted by the boot. It was in those days that I told the board David had to go.

“My message would have been familiar to board members who knew me. The minute a Manchester United player thought he was bigger than the manager, he had to go.

“I used to say, 'The moment the manager loses his authority, you don't have a club. The players will be running it, and then you're in trouble.'”

Ferguson got his way, with Beckham departing for Real Madrid the following summer in a £24.5million deal.

It may have been the spark that lit the fuse on the star’s exit from Old Trafford, but Beckham was able to laugh off the incident at a World Aids Day Gala in 2017. He said: "We had a few wobbles over the 13 years. You know the boss, always on European nights, would come onto the pitch.

“He'd start taking penalties and free kicks and telling all of us how great he was when he played — the goals he scored and things like that.

"But the time when I really got to find out how great he was after a game against Arsenal where I think I'd made a couple of mistakes.

"He came into the dressing room, we had a few words, he started to walk over toward me and he kicked a pile of clothes on the floor. Out came this boot and hit me.

"That's when I realised actually how accurate he really is!"