IAN LADYMAN: How much more can Pep Guardiola take after City defeat?

IAN LADYMAN: How much more can Pep Guardiola take after falling short in the Champions League with Man City for a SIXTH time? His team need to respond quickly for the title run-in

It now comes down to the issue of how much one team and one man can take. Manchester City and Pep Guardiola in the Champions League. Not so much a disappointment, more a long straight road littered with the detritus of one disaster after another.

Six times the Premier League’s most consistently brilliant team have tried to win this competition under Guardiola. Six times they have failed, each attempt even more calamitous than the next.

To think it used to feel as though the grand old European Cup trophy would one day be Guardiola’s to keep. That was back in his days at Barcelona, when Lionel Messi and company won it for him twice in three years. 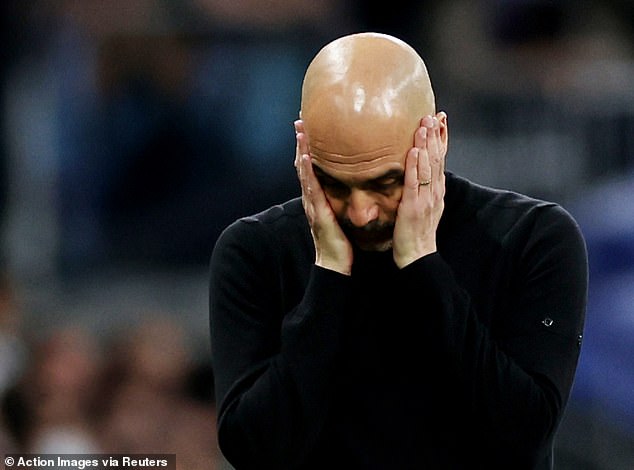 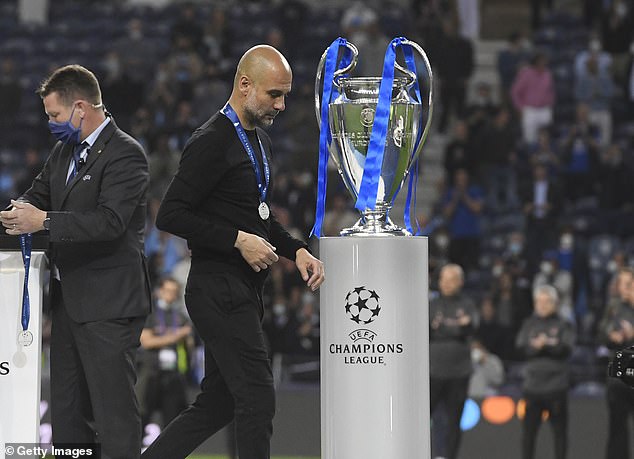 Six times they have failed to win the Champions League under Guardiola, each attempt even more calamitous than the next

Here, at City, it’s different and the painful truth for a club that wants so badly to consider itself among Europe’s elite is that it continues to get worse not better. The further along the road they go, the further away they seem to get. Guardiola, it is worth pointing out, is only contracted at the Etihad Stadium for one more season.

Last May in Porto was a horror story. Having reached the final against Chelsea, Guardiola picked a baffling team and its performance was one totally aligned with the decisions they made. City lost 1-0.

Up until the moment Real substitute Rodrygo stabbed what seemed a consolation goal in to the City goal at the end of normal time, the Spanish champions had not managed a single shot on target. What followed, therefore, was freakish and impossible to explain. This is sport. This is what can happen. 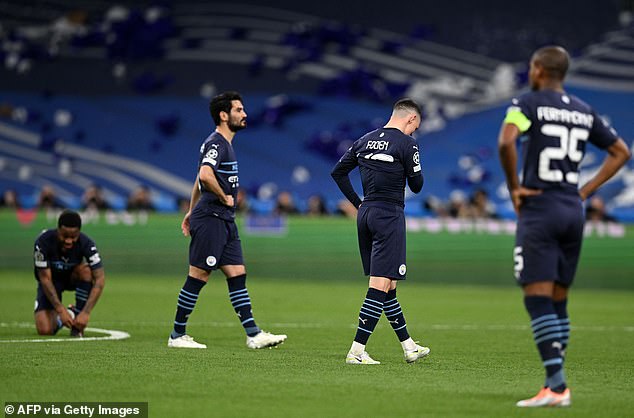 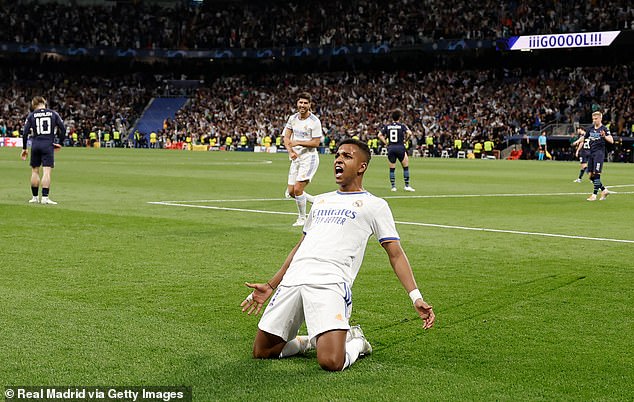 Up until Rodrygo stabbed what seemed a consolation goal, the Spanish champions had not managed a single shot on target

So there is no blame to apportion to City. Not to Guardiola or his players. But that does not mean that there may not yet be consequence.

Not only do City have to find a way to recover from this extraordinarily painful night in the long-term, they must also do so in time for Sunday’s Premier League game with Newcastle. City’s lead over Liverpool at the top of the Premier League is just a single point. Liverpool are a team running hot.

Having averted their own European catastrophe in Villarreal on Tuesday, they will take the confidence of that comeback in to the rest of the season and will also be buoyed by the fact they do not have to face City in Paris at the end of the month.

For City, the final two weeks of the domestic season will see them play four Premier League games that all must be won and the psychological and emotional challenge of that task is clear. 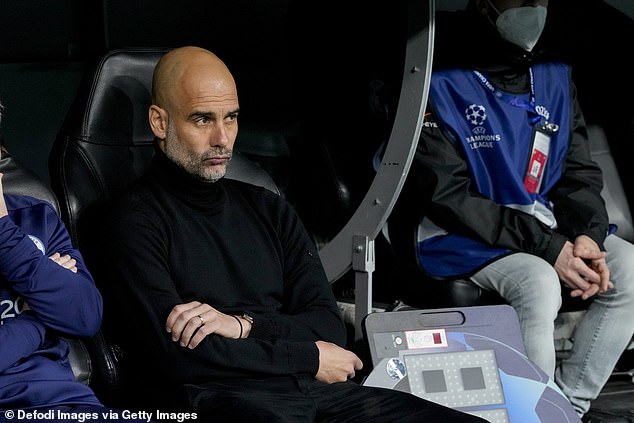 Here they were downed on a night of almost unspeakable drama. The aggregate score line shows they conceded six goals over 210 minutes and that is too many.

But they were so close to perfection here. So, so close, as Guardiola himself would say. Had substitute Jack Grealish not been denied twice in the moments before Rodrygo’s first goal – once by a goal line clearance and once by goalkeeper Thibaut Courtois’ toe – we would have been talking about one of the great performances by an English team in Europe.

The Bernabeu – currently looking rather strange in the midst of its £200m renovation – was nevertheless bouncing before kick off and indeed as Real pressed in the early stages of the game.

But City’s football soon turned the feel and the rhythms of the contest in their direction. Kyle Walker – who played despite not being fully fit – becalmed the raging menace of Brazilian sprinter Vinicus Junior. Rodri, in the centre of midfield, kept the waters of the Madrid attack from breaking on the shores of the City defence. 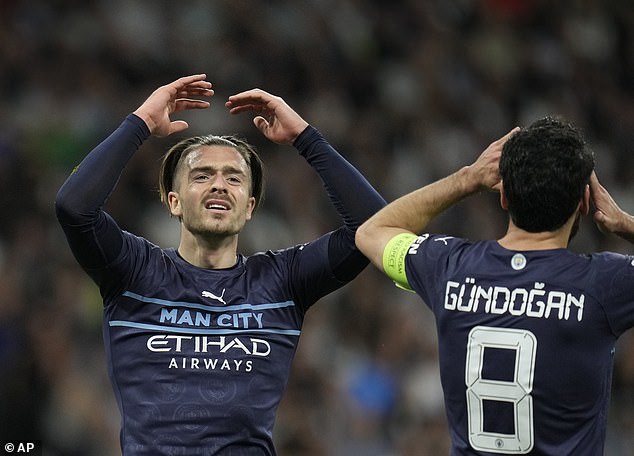 And then, with only a quarter of an hour remaining, they scored. When they did so, the City support high up in that corner of the stadium celebrated what appeared to be their team’s passage to a successive final.

Had they seen this through, they probably would have travelled to Paris as favourites. Instead it’s Newcastle at home and if that one doesn’t go well then a season that promised City a treble until Liverpool beat them in the FA Cup last month could feasibly end with nothing.

Guardiola, dressed all in black, ambled on to the field when this was all over looking for players to console. An embrace here, a pat on the back there.

On Thursday morning he will wonder maybe why Kevin de Bruyne failed to bring his best to this stage. He may wonder if a centre forward may have made a difference.

But this wasn’t really about any of that. This was sport and this is what sport does. It’s how Guardiola and his players respond that will tell us most about them. 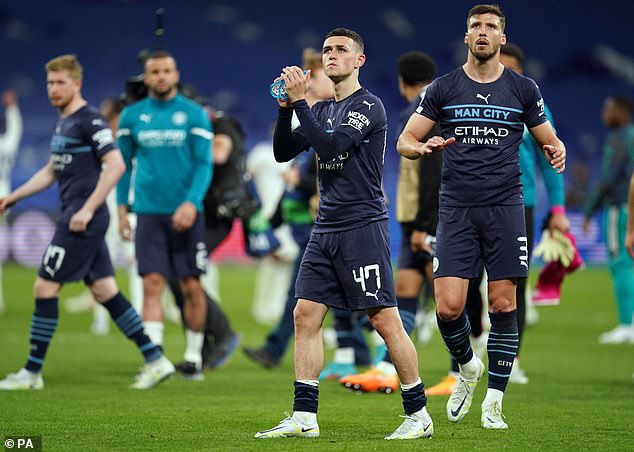