When a mass brawl erupted on the Stamford Bridge touchline during the final few minutes of Chelsea’s feisty Premier League encounter with Leicester last night, there was one thing on Antonio Rudiger’s mind. The Blues responded exactly how they’d wanted to following Saturday’s FA Cup final defeat to the Foxes at Wembley.

Chelsea were left to lick their wounds as they watched Leicester lift the trophy under the famous arch after being on the receiving end of two major talking points.

Late in the day, Ben Chilwell’s equaliser was ruled out following a VAR check for offside by the finest of margins.

Yet still, neither of those incidents were the hardest thing to digest as they left Wembley. 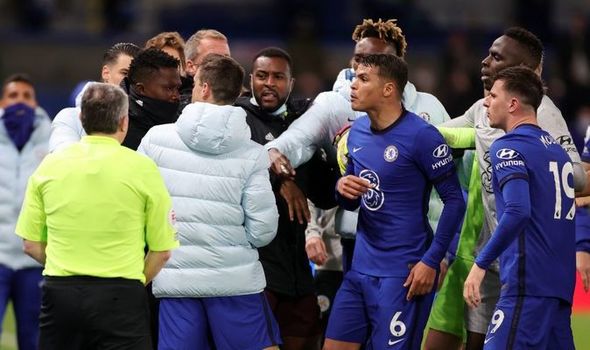 That came in the form of a video that emerged on social media from Wesley Fofana’s Instagram live stream of Daniel Amartey mocking and throwing the Chelsea pennant that was gifted to the Foxes ahead of kick-off.

The clip went viral and as expected, was not gratefully received by the Chelsea players.

Immediately, they plotted their revenge on Leicester as they partied the night away and celebrated their famous triumph.

That’s why there was little surprise when tensions spilled over in the closing stages of last night’s match, with up to 30-people involved in the ruckus that broke out following Ricardo Pereira’s late tackle on Chilwell.

Amartey, who was an unused substitute was booked for his involvement in the ugly scenes after he was targeted by three Chelsea players.

Thiago Silva, Cesar Azpilicueta and Mason Mount all made their feelings known to Amartey, when he became involved in the conflict on the touchline.

The Ghanian was booked for his actions before being urged to sit down by boss Brendan Rodgers.

Speaking after the game, Antonio Rudiger made it clear that the Chelsea players did not forget Amartey’s action in Fofana’s video as he hit out at the disrespectful celebrations that played a part in the confrontation.

“Unfortunately, some people of them don’t know how to celebrate. We had to punish them, 100 percent,” Rudiger told Chelsea’s 5th Stand app.

“Some people from them gave us a bit more motivation from Saturday. Congratulations to them, they won and everything.

“Celebrate and everything but don’t disrespect club history. This is a bit bigger than you.”

Meanwhile, Thomas Tuchel stated that while he did not mention the video, his players used the clip as a motive to win the fiery contest. 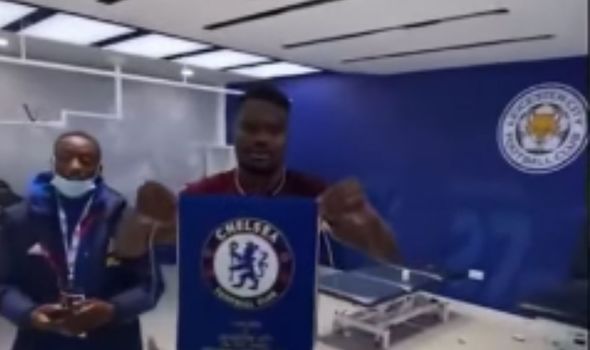 “The players were well aware. But I’m not into these things too much, because it can sometimes give you too much energy and feelings of revenge. I don’t like this at all.

“We do what we do and that’s to play football on the highest level possible.

“We need energy and hunger and that makes us a difficult team to play. And there’s nothing more I can say about it.”