Harry Kane’s future looks set to be the dominant Premier League transfer saga this summer after the England star informed the club he wants to leave.

Kane has admitted his frustrations over Spurs’ lack of trophies in recent seasons, after failing short in Champions League and FA Cup finals and slipping to a seventh-place Premier League finish in 2020/21.

The 27-year-old determination to move on from north London has sparked early transfer interest in him from across the Premier League, with Chelsea, Manchester United and Manchester City all tracking his situation with interest.

However, with Kane under contract until 2024, Spurs are under no real pressure to sell their talisman despite his desire to leave.

Chairman Daniel Levy has consistently demonstrated his willingness to hold out on sales to secure a maximum price for a key player and the 59-year-old secured asking price fees for Michael Carrick, Luka Modric and Gareth Bale during his time at the club.

According to reports from The Independent, Spurs are confident of Kane’s unwillingness to hand in a transfer request and invoke the ‘Webster Ruling’ which would put more pressure on Levy over a sale. 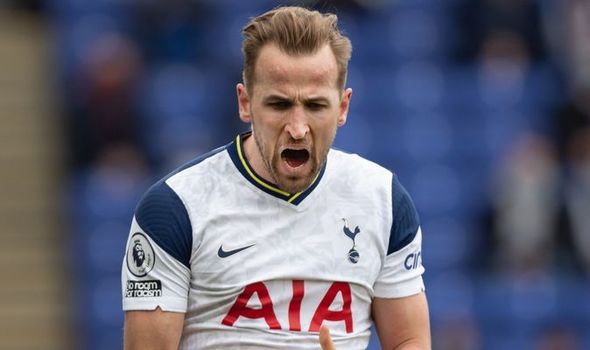 Levy’s stance is unlikely to change, as demonstrated in his hard-line position in other high-profile negotiations, and he could demand in excess of £150m for Kane.

With Spurs’ Premier League rivals potentially not in a position to break the £100m barrier this summer, clubs will be working on structured and player-swap deals to tempt Levy into a move.

At Express Sport we look at what each English club could offer to secure a deal for Kane ahead of the 2021/22 season.

According to the report from the Independent, Thomas Tuchel’s side have an edge over their Mancunian rivals due to a better player-swap deal on offer.

After a frustrating first season in English football for Timo Werner, Tuchel could be in the market for a superstar No.9 in the coming months, but the Blues will offer a player-plus-cash deal.

Tammy Abraham and Kepa Arrizabalaga have been mooted as two possible makeweights in a deal, with Abraham providing a possible direct replacement for Kane, alongside a £50m fee.

United club legends Mark Hughes and Gary Neville have added their voices to the growing brigade of support for Ole Gunnar Solskjaer moving for Kane.

Neville claimed that securing a deal for Kane would be ‘difficult’ for any side this summer but he hinted City’s unwillingness to bid over £65-70m for a player could give the Red Devils an advantage.

The former England defender has earmarked Dan James, Anthony Martial and Jesse Lingard, plus a ‘chunk of money’, as a package offer that could persuade Levy to open talks on a sale.

Martial would offer a more experienced Kane replacement than Abraham and Lingard’s revival on loan at West Ham has demonstrated his determination to rebuild his Premier League career.

Part of Kane’s desire to leave Tottenham is rumoured to be based on a conversation with Levy last summer over his future.

The Tottenham chairman reportedly confirmed a gentleman’s agreement with his star player to reject interest from a rival ahead of the 2020/21 season and remain at Spurs for another year.

The basis of the deal indicated Kane’s loyalty would be rewarded with a smooth exit in 2021 if Tottenham failed to secure a major trophy or qualify for the Champions League.

Despite the details over the rejected offer remaining unconfirmed, it is widely rumoured to be Pep Guardiola who Kane was encouraged to ignore.

With the picture now changing drastically in the last 12 months, City will re-enter the race, with Kane looking to keep Levy to his word.

City are unlikely to offer a player swap deal, as Guardiola is focused on finding a long-term replacement for Sergio Aguero, and a straight deal for Kane could be cheaper than a bold push for Borussia Dortmund hitman Erling Haaland.