Kane revealed to Gary Neville’s YouTube channel The Overlap that he does not want to look back at what he has achieved in his career and wish he had done things differently, while insisting he will be in charge of his own destiny, not Spurs chairman Daniel Levy.

Even though he said he had not seen Kane’s interview, Mason saw no harm in what Kane revealed.

“No player wants to end their career with regrets. No human being wants regrets. It’s normal,” Mason said.

Kane also named Kevin De Bruyne as the Premier League player he would most like to play with, with Manchester City reported to be interested in signing the 27-year-old.

“I wasn’t aware of that but I’d like to play with Kevin De Bruyne as well. I think every player would,” Mason added. “He’s a fantastic player and I’ve spoken to him a few times and he’s an exceptional person.”

Kane: I feel like I’ve still got another career to play

Kane also has reiterated his desire to win trophies “season in, season out” after appearing to wave goodbye to Spurs fans after the club’s final home game.

It was revealed earlier this week that Kane had told Tottenham that he wants to leave the club this summer, with Manchester United, Manchester City and Chelsea all understood to have registered their interest with his representatives.

The 27-year-old has previously spoken of his desire to win trophies – something Spurs have been unable to do during his time at the club – and Kane said: “I don’t want to come to the end of my career and have any regrets. I want to be the best I can be.

“I never said I’d stay at Spurs for the rest of my career and I’ve never said I’d leave Spurs. People might say, ‘he’s desperate for trophies, he needs trophies’, but I feel like I’ve still got almost another career to play.

“I’ve got seven, eight years, kind of what I’ve already had in the Premier League. So I’m not rushing anything, I’m not desperate to do anything.”

Levy has upper hand over Kane

The Athletic’s David Ornstein believes few clubs will be able to afford Levy’s asking price for Kane this summer which may force the striker to stay at Tottenham a little longer.

“He holds some power, but Daniel Levy holds the upper hand because Harry Kane in 2018 signed a new six-year contract, which was fairly extraordinary in its length,” he said. “Many people are now looking at that and saying it was misguided.

“There’s a lot of debate in football over whether he should have used one of the super-agents as opposed to his father and brother. Now they’re going to have to try to come to an amicable solution, which doesn’t appear that likely given what we’ve seen from Kane over the last week or so.

“It’s not going to happen quickly because Levy doesn’t need to make a decision yet – knowing him it’ll go right down to the end of the transfer window. But Kane, if he’s going to win major trophies, he’s going to have to leave Tottenham.

“But he’s under contract until 2024 so it’s going to be incredibly difficult. It seems like he’ll keep making some public statements here and there and that is really upsetting the Tottenham hierarchy. They’re not happy with his conduct at all so perhaps that presents a glimmer of hope if Kane’s going to move.

“But Levy will not drop his asking price for anybody. It may open up an English suitor like Manchester City – which he [Levy] had no intention of doing before – but they will have to pay the money. I think that is very unlikely this summer.” 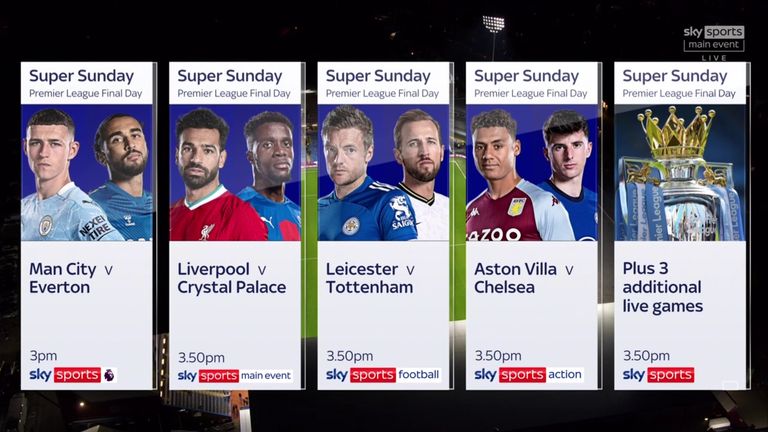 The race for a top-four finish in the Premier League will go to the wire, with seven games live on Sky Sports on the final day of the season.

Chelsea climbed up to third and dented Leicester’s prospects of Champions League football with a 2-1 victory at Stamford Bridge on Tuesday, and Liverpool took advantage on Wednesday, leapfrogging the Foxes with a 3-0 win over Burnley to take control of their fate.

Just one point and goal difference separate three sides heading into Sunday’s finale – and you can follow all the drama with Sky Sports.

Liverpool vs Crystal Palace, Leicester vs Tottenham and Aston Villa vs Chelsea will all be live on Sky Sports channels as the season reaches its climax and the Sky Sports cameras will also be at the Etihad to see champions Manchester City lift the trophy after taking on Everton.

Leicester vs Tottenham – live on Sky Sports Football from 3.50pm

West Ham vs Southampton – live on Sky One from 3pm

Arsenal vs Brighton – live on Sky Sports Arena from 3.50pm

Fulham vs Newcastle – live on Sky Sports Mix from 3.50pm

– All games will be available on the Red Button on Sky Sports Premier League and Main Event.