Hannah Hampton is NOT included in Sarina Wiegman's Lionesses squad

Hannah Hampton has been dropped from Sarina Wiegman’s England squad to face Japan and Norway, while Maya Le Tissier and Katie Robinson earn their first call-ups to the national team.

Sportsmail revealed on Monday that Hampton had been axed from the final Lionesses’ squad of the year due to behaviour and attitude problems, with the 21-year-old yet to feature since England’s Euro 2022 triumph at Wembley this summer.

Before England’s World Cup qualifiers in September, Wiegman claimed Hampton’s absence from the national squad was due to ‘some personal issues that she has to solve so for her at this moment it’s better for her to stay at her club’. 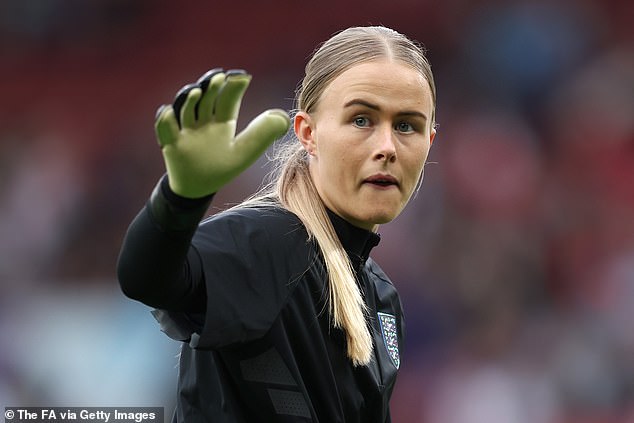 However, it is understood that the goalkeeper’s poor behaviour and attitude has caused problems both internationally and at club level, prompting Wiegman to axe the Euro 2022 winner.

Meanwhile, Jordan Nobbs has returned to the squad alongside striker Alessia Russo, who makes a comeback having missed England’s October camp through injury.

The Lionesses’ friendlies against Japan on November 11 and Norway on November 15 will call an end to a very successful year.

Upon announcing the squad, Wiegman said: ‘These will again be two good challenging games for us which is just what we want and need at this stage.

‘We will come up against one team in Norway that we know plenty about and who are building again under Hege (Riise).

‘However, before then we have a tough match against a Japan, who are bringing a different style of play which is a good preparation for the World Cup.

‘We are hoping the conditions in Spain will help us to maximise our training as every session counts, along with the matches of course, in helping us to be ready for the World Cup.

‘We cannot waste a minute and I am looking forward to getting back on the grass. We have some new players to look at as we know we have so much competition for places coming through.’