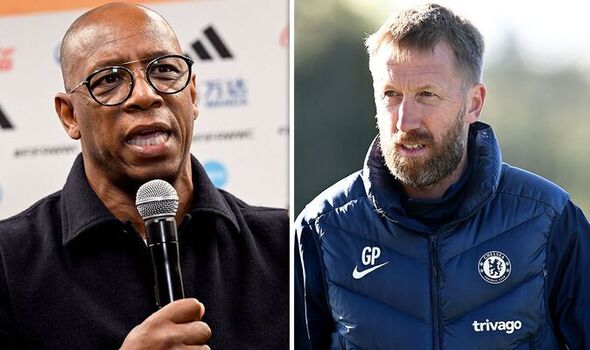 Ian Wright is still perplexed at Raheem Sterling’s role at Chelsea – despite Graham Potter defending his use of the England star. Sterling has been criticised for his performances for the Blues since his summer move from Manchester City but Potter has also taken some of the blame.

Some onlookers have suggested Sterling has played at wing-back of late for Chelsea. Potter has stated he has never asked the 27-year-old to play in that position.

But his defence has fallen on deaf ears. Arsenal legend Wright cannot understand the role Sterling has played of late and does not think he will be happy.

Speaking on the Kelly and Wrighty Show, Wright said: “It’s one of the confusing things that Graham Potter is doing at the moment, I can’t get my head around it. When I did the analysis on the game [Chelsea’s defeat to Brighton], the full-back area, Brighton just absolutely tore them to shreds because you’ve got Pulisic and Sterling who are supposedly meant to come and try to help [Trevoh] Chalobah and [Marc] Cucurella.

“It wasn’t happening and I couldn’t understand it. There’s no way he [Sterling] can be happy playing that role, especially when you look at what he’s done at City, and the team he was playing in, everything was really concentrated on offence for him.

“It must be really strange and tough for him to go to a new club and have to play in a position like that. I hope they can sort that out soon for him.”

Sterling has three goals and one assist in his 11 Premier League appearances for Chelsea to date. He was a topic of discussion at Potter’s press conference on Friday and he defended how he has played him.

“He has never been asked to play and defend in a back five or back four even. His responsibility has always been against the full-back.

“With the back four behind him tonight probably helped, he was a little bit higher and a little bit wider. It was nice for him to score because he has been working hard for the team.

“As I said before, the team has to function well for the individuals to do well. So I’m really pleased he got his goal today.”