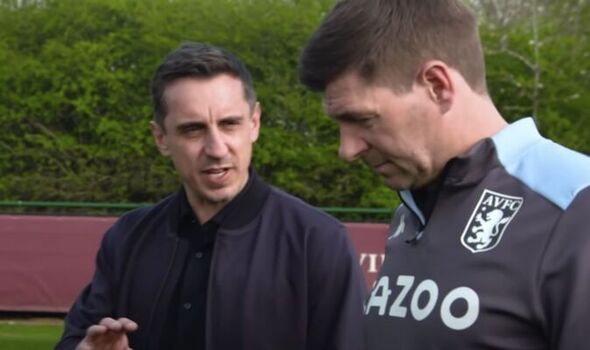 Gary Neville has claimed Douglas Luiz’s failed move to Arsenal may have had a negative impact on the Aston Villa dressing room following the sacking of Steven Gerrard. The ex-Liverpool captain was dismissed by Villa Park chiefs in midweek after his side were thrashed 3-0 by Fulham at Craven Cottage.

After a positive first season at the helm – that still ended in disappointing fashion – Gerrard failed to drive his team forward and deliver what he promised.

His team were short of ideas and starved of all confidence, leaving Villa with no other decision but to pull the trigger.

Neville believes there were a number of contributing factors including Arsenal’s three deadline-day bids for Brazilian international midfielder Douglas Luiz.

He feels the player would have wanted to make the move and was therefore potentially unhappy with Villa’s decision to keep him at the club, prior to signing his new contract.

“The situation of that bid for Luiz on the last day of the transfer window,” Neville said. “He won’t be happy about not going to Arsenal, Luiz, so he [Gerrard] probably had a player that’s not happy in the dressing room.”

Gerrard also made a series of crunch calls earlier in the season, when he decided to strip Tyrone Mings of the captaincy.

The England international defender was not even playing prior to Diego Carlos’ Achilles’ injury before being reinstated into the side.

On Friday evening, Gerrard released his own statement, addressing his feelings on his departure from Villa, writing: “I would like to thank everyone connected to Aston Villa Football Club, for the support shown to me during my time there.

“I would personally like to thank the board of directors, the players and all the staff for their hard work. To the fans, it is regrettable that it didn’t work out in the end.

“But I owe you a debt of gratitude for the way you welcomed me into your club, and continued to push the team on during difficult times.

“Aston Villa is a club with a special history, I really wanted to bring back those memorable achievements, unfortunately, it wasn’t to be. I wish everyone at the club all the very best for the future. Steven Gerrard.”

Villa are targeting Sporting boss Ruben Amorim for the vacancy but his current contract in Portugal contains a bumper release clause.

The Midlands side blew away the cobwebs in the first game since Gerrard’s dismissal by smashing Brentford 4-0 in the Premier League on Sunday.

Danny Ings was at the double while Leon Bailey and Ollie Watkins were also on target for caretaker boss Aaron Danks.

Gary McAllister, Neil Critchley, Tom Culshaw, Jordan Milsom and Scott Mason all followed Gerrard out of the door as the search for his replacement continues.