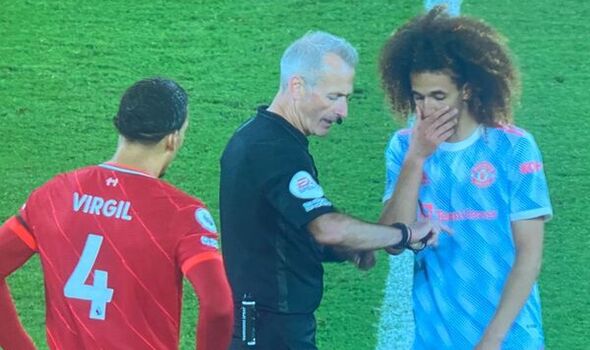 Gary Neville declared he was “proud” of Manchester United youngster Hannibal Mejbri for showing some fight in the closing stages of the 4-0 defeat to Liverpool when the Tunisian teenager smashed into Liverpool duo Jordan Henderson and Naby Keita. The 19-year-old narrowly escaped a red card when he got stuck into the hosts in the final minutes of the match as the Reds showcased the gulf in class between the two sides.

But instead of criticising Mejbri’s aggression and rashness, Neville actually saw positives in the way the substitute attempted to make a statement.

“It takes a young kid to come on and show the rest of them how to sprint for the ball and put a challenge in,” Neville said during commentary.

“I’m actually proud of him! Maybe he doesn’t like the idea of Liverpool players passing it round him. I wish the rest of them were the same.”

First Mejbri was shown a yellow card for flying in on Henderson, leaving the Liverpool skipper in a heap on the turf.

Then in the final minutes, he slammed into Keita, leading to strong protests from the Liverpool players who wanted Mejbri off.

He wasn’t done there either when he became embroiled in a physical tussle with Andy Robertson, as he was marked from a throw-in.

Neville was disgusted by the nature of United’s toothless performance as he hit out at the players for their lack of fight and commitment to the badge.

“It’s a decade of repeated failure and that’s not good enough,” he said.

“Man Utd have got everyone in the country expected tonight. Really in a poor place. The end of the season can’t come quick enough.

“Liverpool are in top form and it was always going to be difficult. This is a broken Man Utd squad in this moment in time. It’s on the edge, that’s for sure.”

The Reds were ahead within just a matter of minutes as Mohamed Salah raced down the right before squaring for Luis Diaz.

It set the tone for a night of Liverpool domination and Salah was on target himself shortly after when he finished an exceptional team move to double Jurgen Klopp’s side’s advantage.

Sadio Mane then got in on the act in the second half when he steered home Diaz’s cut back.

The goal meant all three of Liverpool’s attackers had registered a goal and assisted in the match.

Diogo Jota then put the ball on a plate for Salah to grab his second of the night, with the assistance of a deflection off Aaron Wan-Bissaka.