Gareth Southgate has condemned the England fans who booed the both sets of players who knelt before the start of the match against Austria on Wednesday night. Southgate’s side were getting ready for their first friendly ahead of the European Championships next week.

And players from both sides took the knee after the referee blew his whistle in a gesture which has become a common message from footballers all over the world in the support for social change.

The booing was clear with 7,000 fans in attendance for the England friendly in Middlesbrough.

But the jeers from a few hostile supporters were soon drowned out by the applause of other fans.

It was the first time England were playing a match in front of a home crowd and made the anti-racism gesture. 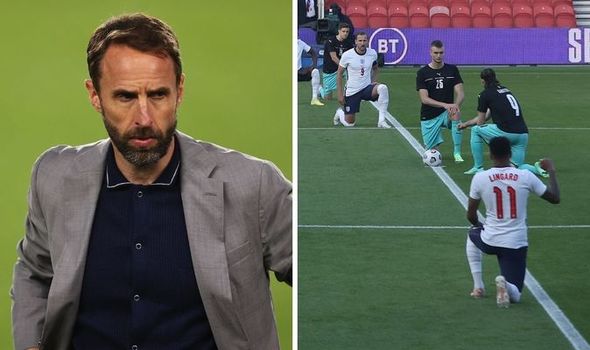 “It’s not something I want to here,” Southgate said.

“On behalf of our black players, it feels a criticism to them.

“Some people seem to have got into their head it’s a political thing.

“I was pleased it was drowned out. Some people aren’t quite understanding the message.”

Southgate spoke at length back in March at how the squad held discussions on whether to continue making the gesture after Wilfried Zaha stopped doing so, stating it felt “degrading”.

“I’ve spoken with the leadership team about this and I’ve asked them to talk to the other players because I think it’s a good process for them to hear each other’s views,” Southgate said at the time.

“That’s part of how we educate ourselves in terms of these matters. The one thing we’re very clear on is that we will be unified in whatever we do and if there’s any doubt I think we will take the knee.

“I’m hugely respectful of everyone’s opinions on that, I think there is an impact to be had on it. I listened to Wilfred Zaha’s comments on it and totally understood his point of view that it [taking a knee] isn’t enough now. 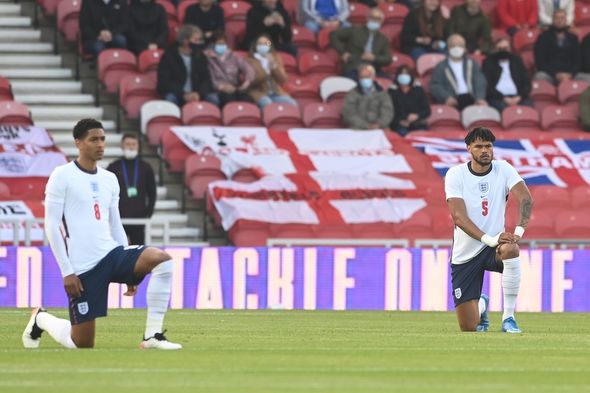 “So, it’s complicated. The debate around taking the knee or walking off the pitch is peripheral really, the core problems are with racism and discrimination, they’re the discussions that need to happen.”

After the game got underway, attention soon turned to the action on the pitch as England pushed for a breakthrough with the likes of Jack Grealish, Bukayo Saka and Jude Bellingham impressing.

And it was Saka who eventually scored the game’s only goal midway through the second half, tapping into an empty net.

But Southgate was left with a bigger issue to worry about when Trent Alexander-Arnold hobbled off the pitch with a thigh injury.