‘Game changer’: Schwarzer says Redmayne tactics could be a keeper

Few in world football knew much about Andrew Redmayne before the Socceroos’ penalty shootout win over Peru last week. But after footage of the Sydney FC goalkeeper’s tactics went viral, his antics could become the new norm for goalkeepers, according to legendary gloveman Mark Schwarzer.

Australia’s most capped men’s player has been involved in his fair share of shootouts for club and country but says he can’t recall seeing a goalkeeper use as many psychological tactics as Redmayne last week.

Brought on in the last minute of play specifically for the shootout, Redmayne danced along his goal line in an attempt to distract the focus of the Peruvian penalty-takers.

He ushered his teammates to the spot, handing them the ball while protecting them almost like a personal bodyguard. He kicked the ball off the spot for the Peruvian players. He would delay his walk to the goal line to let the Peruvians deal with the pressure for an extra 20 seconds.

Most notably, he threw away the water bottle of the Peruvian goalkeeper that had a cheat sheet of Australia’s penalty-takers taped to the side.

“Obviously it was unorthodox. We’ve not seen it before you,” Optus Sport and Gegenpod host Schwarzer said. “There are comparisons to [former Liverpool goalkeeper] Bruce Grobbelaar, [Jerzy] Dudek in the [2005] final of the Champions League for Liverpool.” 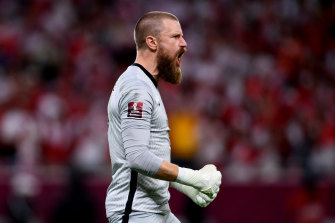 Schwarzer famously made two saves in the 2005 penaltyshoot win over Uruguay that sealed the Socceroos’ first World Cup qualification in 32 years. He denied Dario Rodriguez and Marcelo Zalayeta with two superb blocks from the spot before John Aloisi slotted the winning penalty.

He had made big saves in Australia’s 1993 shootout win over Canada, for Boro in a cup tie against Arsenal in 1999 and was unfortunate not to help Fulham progress past Chelsea in the League Cup in 2011. 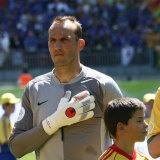 For all his experience, Schwarzer never used the range of tactics like Redmayne.

However, he believes it could become a regular feature among the world’s best goalkeepers who watched the success of the eccentric Redmayne against the Peruvians.

“You know what a lot of goalkeeping coaches are like, they look for an extra a little bit of advantage,” Schwarzer said.

“I wouldn’t be surprised if that were to happen moving forward. It could be a game changer.

“It could be certainly a trendsetter.”

The Socceroos’ qualifying triumph over Peru sealed their passage to the 2022 World Cup in Qatar were they will be pitted against France, Tunisia and Denmark in Group D.

Australia faced the two European nations at the 2018 tournament in Russia but Schwarzer believes the French and Danes have only improved significantly since.

“I don’t think anyone can kid themselves how difficult this World Cup’s is going to be for the Socceroos, playing in France and Denmark as they did four years earlier,” Schwarzer said.

“I think both sides have better sides today than they were back then.”