Liverpool salvaged a point on the opening weekend of the Premier League season as second-half goals from Darwin Nunez and Mohamed Salah cancelled out Aleksandar Mitrovic’s brace in an exhilarating 2-2 draw with Fulham. Last season’s runners-up looked out-of-sorts at Craven Cottage as they handed Premier League rivals Manchester City an early advantage in the title race.

Fulham announced their re-arrival in the Premier League with a flourish, asserting their intentions from the off. The Cottagers pressed Liverpool and looked a threat from the get-go, so it came as little surprise to see the hosts open the scoring. Mitrovic set about silencing his Premier League doubters by towering over Trent Alexander-Arnold at the back post and planting a powerful header past Alisson with just over half an hour on the clock.

The setback seemed to spark Jurgen Klopp’s subdued side into action as Andy Robertson nearly inspired an almost-immediate reply, flashing one across the face of the goal, before Luis Diaz struck the crossbar. A disciplined and organised Fulham continued to steal the show into the second half and could have doubled their lead in the second half as Neeskens Kebano struck the post.

Super sub Darwin Nunez then looked to have come to Liverpool’s rescue, levelling the contest just after the hour mark with an inventive flick, only for Mitrovic to put the hosts back in front after coolly slotting home from the spot after being tripped by Virgil van Dijk. There was still time for Mohamed Salah to score his obligatory goal on the opening game of the season, as the Egyptian poked home a late equaliser. Express Sport take a closer look at five things we learnt from an epic clash at Craven Cottage.

JUST IN: Liverpool might have another Luis Suarez or Fernando Torres after opening day Fulham draw

Liverpool look off the pace

Pre-season was something of a mixed bag for Liverpool as Klopp experimented with personnel and line-ups. Last weekend’s exhilarating 3-1 win over Manchester City in the Community Shield then looked to have allayed any fears that the Reds harboured heading into the new season, however, on Saturday, those fears once again reared their heads.

Klopp’s side looked out-of-sorts in the first half as Premier League new boys Fulham put Liverpool under pressure from the off. The Reds were wasteful in possession as Silva’s side didn’t allow last season’s Premier League runners-up a second to settle on the ball.

Despite a string of injuries, the only tweak to Liverpool’s starting line-up compared with last season was Roberto Firmino leading the line in Sadio Mane’s stead. Though the Senegalese star will undoubtedly be missed this campaign, his absence alone cannot be credited as the reason for Liverpool’s limp start; Klopp’s side were simply sluggish and lacking sharpness. Van Dijk’s uncharacteristic error epitomised the Reds’ unsteady showing. 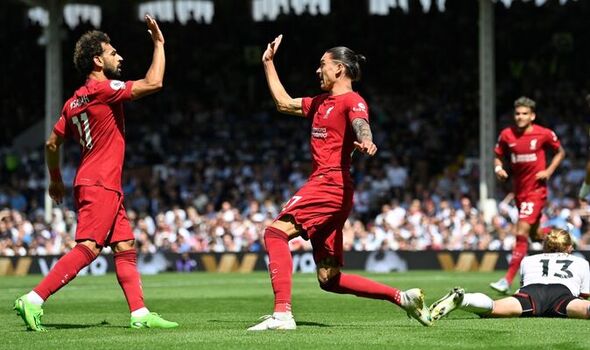 After a stuttering start to life at Liverpool in pre-season, new star signing Nunez has been used sparingly by Klopp so far. The Uruguayan hitman came off the bench to net his first competitive strike for the Reds against Manchester City in last weekend’s Community Shield and would have felt hard-done-by to have found himself back on the bench at Craven Cottage.

However, Nunez more than made his mark when called upon. Despite attempting to pass when he should have taken on an initial chance, the 23-year-old soon made amends, flicking home – albeit via the aid of a deflection from Fulham centre-back Tosin Adarabioyo.

Nunez was heavily involved after entering the fray as he battled up top and proved himself a constant threat to Fulham with his sharp movement and attacking intent. The time has surely come for the striker to be entrusted from the off. If his Craven Cottage cameo is anything to go by, Nunez will bag a flurry of Premier League goals this season. 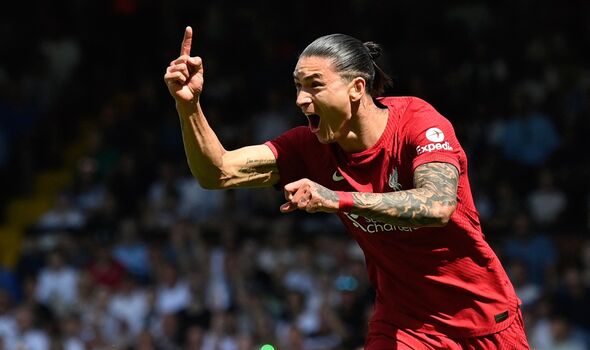 The 2022-23 Premier League season will provide Fulham frontman Mitrovic with a third crack of the whip in England’s top-flight as the Serbian striker bids to silence his doubters and prove his worth in the big time. And what a start the forward made to the season.

The 27-year-old was rewarded for this tireless work in the early stages as he thumped in the opener, rising above Alexander-Arnold to power home Kenny Tete’s whipped deep cross. Mitrovic, who was regarded as something of a hot-head during the early years of his career, appears more mature and well-rounded than ever before as he continued where he left off last season – a campaign in which he struck a staggering 43 Championship goals.

Prior to Saturday, 81 of Mitrovic’s 96 strikes for Fulham came in English football’s second tier, but expect his Premier League goal tally to explode this season. Fulham’s No 9 looks every bit ready for the Premier League, as Liverpool will now be able to testify. 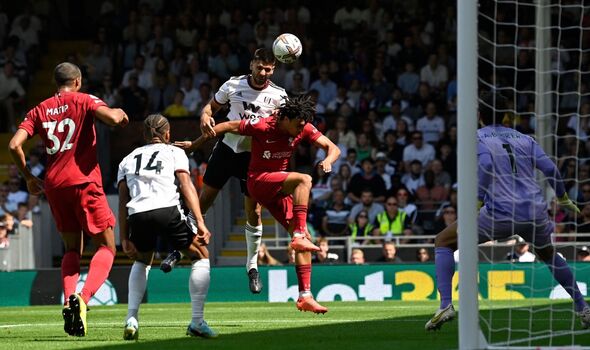 Having either been relegated or promoted in each of the past five seasons and yo-yoed between English football’s top two tiers, Fulham have a point to prove this campaign. The Cottagers are a classic case of the cliche ‘too good for the Championship but not good enough for the Premier League’. However, if Saturday’s display was anything to go by, Fulham may finally be ready to escape football purgatory.

The Whites have fallen foul of poor investment in previous seasons and seen imbalanced squads struggle to adapt to the unique demands of life in the Premier League. This time around though, Marco Silva’s men look up for the challenge.

The Cottagers pressed as a unit in the early stages, not allowing Liverpool a second to settle in possession, while themselves looking slick and sharp on the ball. If Silva’s side can sustain the level of intensity shown against the Reds and maintain their impressive standards of organisation, this may finally be the season Fulham exorcise their Premier League demons and settle among England’s elite.

Manchester United could well be made to rue letting Andreas Pereira go this summer. The Brazilian midfielder showed glimpses of his undoubted potential at Old Trafford but has been forced to seek first-team opportunities elsewhere during a string of loan spells over the past few years.

Having escaped Manchester for good earlier in the window, Pereira will be keen to finally prove his worth in English football’s top-flight on a consistent basis. Against United’s bitter rivals Liverpool on Saturday, the midfielder made an encouraging start in his attempts to show the Red Devils exactly what they may come to miss this season.

Pereira cut a calm and composed presence in attacking midfield as he provided the link to Mitrovic up top, while his fine deliveries were a constant threat. With United struggling to find a solution over Frenkie de Jong, Erik ten Hag could well be made to pay for not affording Pereira an opportunity at United this season. Signed for a fee of around £10m, Fulham look to have bagged themselves a bargain.