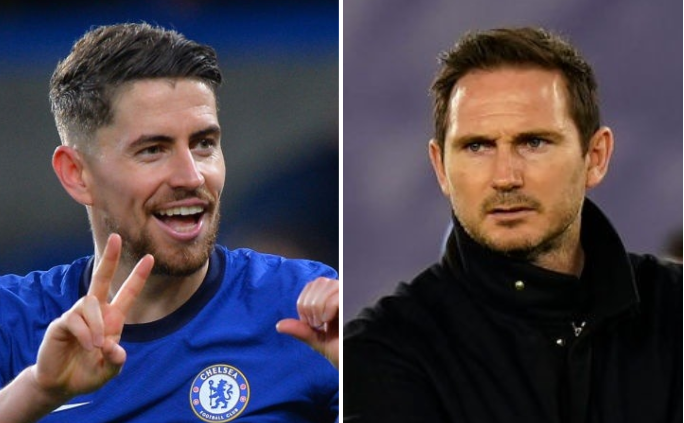 Frank Lampard has hit back at Jorginho’s pointed criticism of his Chelsea tenure after the Italy international claimed the club legend wasn’t ready to take on a job of that magnitude.

The 42-year-old cut his managerial teeth at Derby County and, after just a solitary season in The Championship, he was hired by Chelsea as Maurizio Sarri’s successor.

Lampard’s first term back at Stamford Bridge was considered a success after he secured Champions League qualification, despite working under a transfer ban.

The former England midfielder was subsequently allowed to spend in excess of £200million last summer but after surrendering a 17-game unbeaten run, things quickly began to unravel before he was sacked in January.

Almost every member of Chelsea’s first team squad spoke positively about Lampard’s impact in the aftermath of his sudden departure, but Jorginho, who played a bit-part role under his former manager, broke ranks last month and claimed he had been over-promoted.

‘Look, I’ll be really sincere here on Lampard,’ Jorginho told ESPN Brasil. ‘I believe, given he was a legend at the club, he skipped some steps necessary for learning before moving to a big club.

‘He came to a club where he is a legend, without having experience at other clubs. I think he came too soon, skipped a few steps ahead and wasn’t ready for a job at this level, to be honest.’

In only his second interview following his sacking, however, Lampard hit back at the former Napoli midfielder and claimed criticism from players who were used sparingly during his reign are merely par for the course.

He told the Telegraph: ‘It’s always going to be a fact as a manager when you leave a club, there will be some players who did not play so much and they might have a feeling or a judgement on how you work and they can make statements.

‘For me, I have to expect that as much as I expect the good statements from players who are really positive about how you work. I’ve got no big issue with that.

“I’ve seen some quotes saying that Frank Lampard took this job with his heart. I absolutely didn’t. I don’t make any professional decisions with my heart. Maybe I’m the absolute opposite of that. I’ll go over them a hundred times in my head, but I certainly didn’t with my heart. I took it with a pragmatic view of: ‘what’s the situation? OK, this is Chelsea, I’m going from Derby to Chelsea.’ Not many managers would turn that down head or heart, let’s get it right.

‘After my year at Derby, I was pretty clear that I wanted to go into Chelsea, make them move the ball quicker, make them penetrate lines quicker. I wanted to go and do my thing and try to bring through some younger players into the team. I did that. I didn’t get to the end game, but I certainly think I did a lot of things that I can be proud of.

‘I come away with an overall feeling of pride in what I did in the job. I wanted to stay longer, I wanted real tangible success which, at Chelsea, is winning cups and winning leagues, but it didn’t happen.

‘Hopefully, from where I took over the job, I’ve laid down strong foundations for the future and in the context of where I wanted my managerial career to go, it was an amazing experience.’