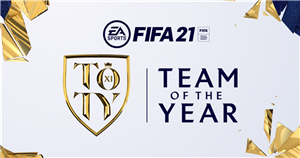 The FIFA Ultimate Team TOTY is the most popular promo of the year for FUT fans, which often sees the very best player items released.

Within any FIFA Ultimate Team season there are always a number of big FUT promos, where highly-rated player items are released into packs, these include FUT promos such as Headliners, Future Stars, Rulebreakers, Freeze, FUTMAS, TOTGS, Winter Refresh, FUT Birthday and many more.

But the FUT Team of Year event is the promo where the highest-rated player items are released, with twelve players, selected by the community, are given cards that are often up to 99-rated.

* Click here to subscribe to Level up! The Esports and Gaming Show on Apple Podcasts, Spotify, Google Podcasts and Spreaker.*

Due to their high ratings and incredible attributes, these TOTY items are likely to be the very best FUT player items that will be released throughout the entire season, with only the Team of the Season promo coming close, and therefore will be much sought-after items with high values on the transfer market.

So, when will the FIFA 21 TOTY promo be released? And, which players are likely to be included in the FUT 21 TOTY?

Check out all the latest info on the FIFA 21 TOTY promo below.

When EA SPORTS confirmed that voting was underway on Thursday January 7, the FIFA 21 TOTY promo page on EA's official website stated that voting for the FUT 21 TOTY closes on January 18, with the final Team of the Year to announced later in January, when special TOTY player items featuring some of the highest ratings of the season will be released in FUT 21 to celebrate each player's incredible performances.

Therefore, it seems likely that the FUT 21 TOTY promo will start releasing players into packs from Monday January 25, 2021.

However, prominent FUT community member @DonkTrading has stated on Twitter that a leaked code from the EA SPORTS website shows that the FUT 21 TOTY will be revealed on Friday January 22, 2021.

The code within the website says: "See who made the Ultimate XI on January 22!"

We'll have to wait and see, but it's likely to be one of those two dates for the FUT 21 TOTY promo to begin.

The FIFA 21 Team of the Year (TOTY) is the biggest and most popular FUT promo, with the event featuring a selection of players based on their performances over the last calendar year, who are given special blue FUT items with significant upgrades and the best ratings of any FUT promo.

But what makes the FUT TOTY promo different to other FUT promos is that the team of eleven players that make up the Team of the Year squad, plus a 12th player, is decided by EA SPORTS FIFA community members by vote, with 70 TOTY Nominees up for selection.

The TOTY is normally made up of one goalkeeper, four defenders, three midfielders and three forwards, where each category can contain a player in any position.


The voting for the FUT 21 Team of the Year squad began on Thursday January 7, 2021 at 4PM GMT. The FIFA 21 Ultimate Team TOTY voting is live now at EA.COM/TOTY.

So, who would feature in the FUT 21 Team of the Year (TOTY) squad? Check out our predictions below.

*FIFA 21 is out now on Xbox One, PlayStation 4 and PC, with the next generation version of the game set to be released on Xbox Series X, Xbox Series S and PlayStation 5 on December 4, 2020.

Fans can enjoy deeper definition in player physiques, including flexing muscles after strikes and strand-based hair on some of the top footballers, combined with dynamic lighting that accentuates footballers’ faces and kits for a whole new level of realism.

Additionally, fans who jump into FIFA 21 can also benefit from Dual Entitlement, enabling them to upgrade their copy of the game from PlayStation 4 to PlayStation 5, or Xbox One to Xbox Series X/S at no extra cost.*