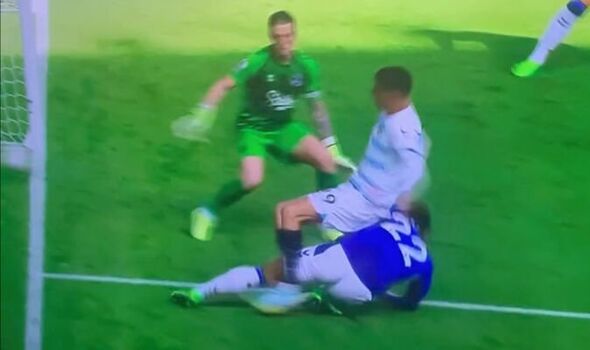 Everton have offered an update on Ben Godfrey after the defender had to be stretchered off with a very serious injury in the first half of their clash with Chelsea on Saturday night. Godfrey received lengthy treatment and oxygen on the pitch before being taken off on a stretcher with his injury, which first appeared to be a possible broken ankle.

Everton posted from their official Twitter account just after 6.30pm: “We can confirm Ben Godfrey has suffered a lower leg injury and has been taken to hospital. We’re all with you, @BenG0dfrey!”

Godfrey went down just 10 minutes into Everton’s first match of the season after sliding in to challenge Kai Havertz as the Chelsea striker made his way towards the near post down the Toffees’ byline. But the 24-year-old’s leg got caught underneath the tackle and the severity of the issue was immediately obvious.

The incident came after Godfrey had initially overhit a back-pass to Jordan Pickford. The ball went out of play but the officials did not spot it to award a corner, which allowed Havertz to steal in and attempt to break into the box. In an effort to amend for his mistake and win back the ball, Godfrey slid in but suffered an ugly knock and had to be replaced by Mason Holgate. 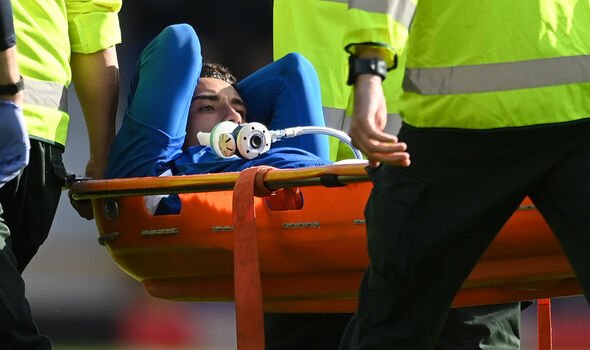 Godfrey was seen to for several minutes by Everton’s medical staff. He was carried down the touchline towards the stadium’s Park End exit and was quickly taken to a local hospital for further treatment.

Everton have a number of injuries to contend with already. Frank Lampard was without Dominic Calvert-Lewin, Andros Townsend, Andre Gomes and Tom Davies for the visit of his former club Chelsea.

There was more injury woe in the second half when Yerry Mina went down with an apparent ankle problem and had to be taken off with 20 minutes to go, though he was able to walk off the pitch. Summer signing Ruben Vinagre came on to make his debut for the Merseyside outfit.

Jorginho put Chelsea 1-0 up before half-time at Goodison Park by scoring from the spot. Abdoulaye Doucoure had brought down Ben Chilwell just before the half-time whistle was sounded and the Italian midfielder sent Pickford the wrong way from 12 yards.