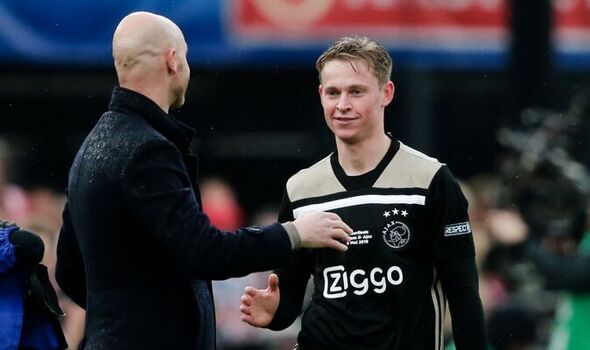 Manchester United may be closing in on a remarkable deal for Frenkie de Jong, but Erik ten Hag has previously hinted why the midfielder wouldn’t fix all of the problems at Old Trafford. United have been crying out for improved options in the heart of midfield for several years now.

Bruno Fernandes’ arrival in January 2020 gave United the kind of playmaker they had been crying out for. But Ole Gunnar Solskjaer failed to bring in another option to play deeper in his midfield with Fred, Scott McTominay and Nemanja Matic coming under scrutiny.

It now appears as though United are finally looking to make some changes this summer with Ten Hag taking over. De Jong had been touted as a potential target for a few weeks, but now a deal is said to be ’95 per cent done’.

Given Ten Hag’s relationship with De Jong from their time together at Ajax, United will undoubtedly be hoping the 24-year-old can hit the ground running at Old Trafford. De Jong did occasionally play in defence during his time at Ajax before establishing himself as a key part of Ten Hag’s midfield.

United may well be hoping that De Jong can be the answer to their problems in finding a midfielder capable of offering some insurance in front of their defence. But Ten Hag has already made it clear that pushing De Jong further back would limit his abilities.

Speaking back in 2019, Ten Hag said: “He leaves the middle of the pitch too often for that. “And if you don’t give him the freedom to go forward, you won’t get the best out of his game.”

The Dutch coach has largely deployed a system with one holding midfielder this season, with Edson Alvarez filling that role. But during De Jong’s final season at Ajax, Ten Hag opted to play another midfielder alongside the United target.

If De Jong does complete a move to United, it will be interesting to see how Ten Hag builds the midfield unit around both the 24-year-old and Fernandes. His previous comments though indicate that United may well need to go in the market for another defensive-minded midfielder to solve their problems.

Matic has already confirmed he will be leaving the club this summer while both Fred and McTominay will face battles to keep their spot. Ten Hag may also look to United’s youngsters to step up, giving the likes of Charlie Savage and Zidane Iqbal opportunities to show their talents.