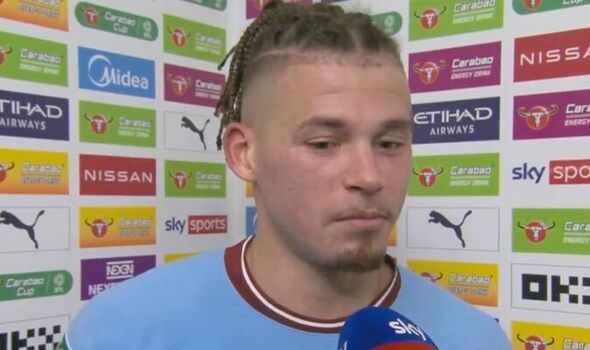 Kalvin Phillips has admitted he is yet to speak with England manager Gareth Southgate about being included in his 26-man squad for the World Cup but remains optimistic he will be on the plane to Qatar. The midfielder returned from injury in Manchester City’s 2-0 win over Chelsea in the Carabao Cup with 40 minutes under his belt to prove his fitness ahead of Thursday’s squad announcement.

The 26-year-old had played only 14 minutes of football since joining City for £45million in the summer after suffering a shoulder injury over the summer which required surgery.

The England international’s lack of game time in general seemed like it might cost him a place in Southgate’s squad with several contenders to replace him in midfield. However, his performances at Euro 2020 are unlikely to be forgotten by Southgate even when considering his injury issues.

But Phillips, speaking after his return to action after City progressed to the fourth round, conceded he has not had a private conversation with Southgate about his status in the squad just a day before the announcement.

“I’ve not so much [had a conversation] with Gareth [Southgate] but I’ve spoke to all the staff and the physios who have kept an eye on my progress,” he told Sky Sports.

“You know anything can happen but I’m optimistic, the amount of games I’ve had… there’s always that doubt.”

Asked how it felt to return to action, Phillips said: “Yeah it was an amazing feeling. Obviously there’s been a bit of doubt with me and my shoulder, my injury, been a long time but I’m glad to get back out there playing with the lads.

“Without playing football for a while it’s going to be nerve-wracking, one of my first appearances for the club, so it felt good but the two goals made it a lot easier.

“It was difficult [being injured]. When I first found out I needed an operation everything went out the window about the situation but a couple days after I just made sure I worked hard and was always positive.

“I’m back fit now so hopefully I’ve got a chance.”

Southgate will make the final decision on his 26-man squad, whittled down from 55 players, on Thursday afternoon ahead of their tournament opener on November 22.