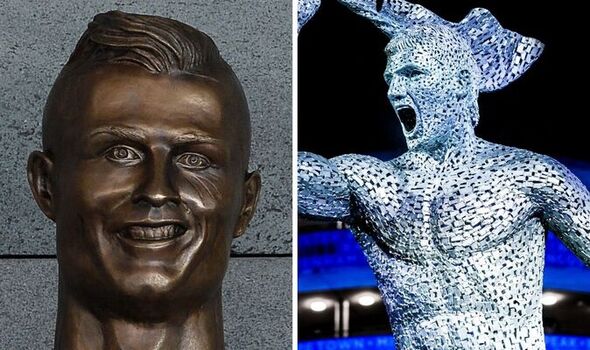 Sergio Aguero may well be breathing a sigh of releif after Manchester City unveiled their statue of the striker on the 10th anniversary of his winning goal in the dramatic 2012 Premier League title race. Footballers have regularly been captured in stone to commemorate their careers with mixed results throughout the years.

Sculptor, Andy Scott, based the monument on Aguero’s wild celebration after his goal against QPR to win the club’s first Premier League title. Aguero said: “Truthfully, it is a very beautiful thing for me, to see myself 10 years ago is very moving. In those 10 years I was able to win a lot of trophies and was able to help the Club become one of the most important in the world.

“I am very grateful to the Club for making this statue in recognition of my football career in Manchester. It is something very special.” Some have not been so lucky to have their moment captured as brilliantly as Aguero though. Express Sport takes a look at some of the best and worst statues in world football.

On the club’s 125th anniversary, Arsenal unveiled statues of three club legends and Thierry Henry’s is arguably the best of the lot. Capturing his trademark knee-side goal celebration, Henry’s statue will stand the test of time and keep the club’s record goalscorer forever in the fans’ hearts.

The world’s greatest footballer has a number of statues around the world but the one unveiled by Napoli on the anniversary of his death captured the Argentine legend perfectly.

There is arguably no greater legend in English football than Sir Bobby Moore and his statue takes pride of place outside Wembley. And the impressive sculpture has stood the test of time so far with fans still gathering around at England games for photos.

United’s ‘holy trinity’ may be simplistic with all three immortalised standing in arms, but the iconic monument is one of the best in world football.

The infamous bust of Cristiano Ronaldo at Madeira airport has since been replaced but will forever be remembered for going viral at its unveiling.

Arguably the most bizarre statue to feature outside a football ground. Fulham’s then chairman Mohamed Al-Fayed commissioned the sculpture before being removed by Shahid Khan just a few years later.

Another footballing great done dirty but his home nation. Ghana paid tribute to one of the country’s greatest ever footballers with a bizarre design.

Egypt are extremely proud of Mohamed Salah, but a bust unveiled in 2018 certainly questioned how the Liverpool star was seen. Many likened the statue to Marv from Home Alone or Leo Sayer.