At the 2008 Olympics, there were murmurs of shock when an all-conquering Jamaican team entrusted Asafa Powell to run its anchor leg in the men’s 4x100m relay. Just a few days earlier in the individual final, Usain Bolt had broken the world record, already showboating as he crossed the line while Powell laboured back in fifth. But if the decision had provoked any whispers of doubt, they were silenced emphatically when Powell crossed the line in just 8.68s – then the fastest anchor leg in history. He might have remained largely in Bolt’s shadow, who was behind barking encouragement right up until the finish line, but being entrusted with that responsibility has a way of bringing out the best in someone.

At Arsenal, it is Eddie Nketiah who is carrying that baton down the home straight. He has watched his friend Bukayo Saka become the brilliant young face of Mikel Arteta’s team, he’s seen Emile Smith Rowe and Gabriel Martinelli play less consistent but crucial roles in a season of steep but ultimately upwards learning curves. And yet despite making his senior debut long almost five years ago, Nketiah had never quite been given the space to run. He was the fringe member of that attacking band for whom fate wouldn’t quite align.

His poacher’s streak was undeniable but there were question marks that Arsenal seemingly couldn’t afford him the time to answer. And so Nketiah’s minutes largely came in fits and starts, left to feed off scraps as Arsenal flailed in the latter stages of games, and his looming exit this summer carried a tinge of sadness but felt like a natural course of action.

Football can be fickle like that, particularly for young players stuck in the pipeline at the biggest clubs. Some explode at the first opportunity, but for those whose development is more of a slow burn, it is a case of waiting for a sliding doors moment that forces faith’s hand – be it injury, mismanagement or mere luck – all in the knowledge that it might never come. Nketiah seemed to have become resigned to that, rejecting a new contract as even Pierre-Emerick Aubameyang’s departure failed to give him a jump out of the starting blocks.

And in that sense, it is a shame that Nketiah’s golden moment has arrived during what seems to be his farewell act. His first Premier League start of the season came barely more than three weeks ago in a miserable defeat against Southampton after Alexandre Lacazette was ruled out with Covid. Perhaps, Arteta should have made that change anyway after Arsenal slumped to back-to-back defeats against Crystal Palace and Brighton – two clubs who’ve both previously shown an interest in Nketiah. 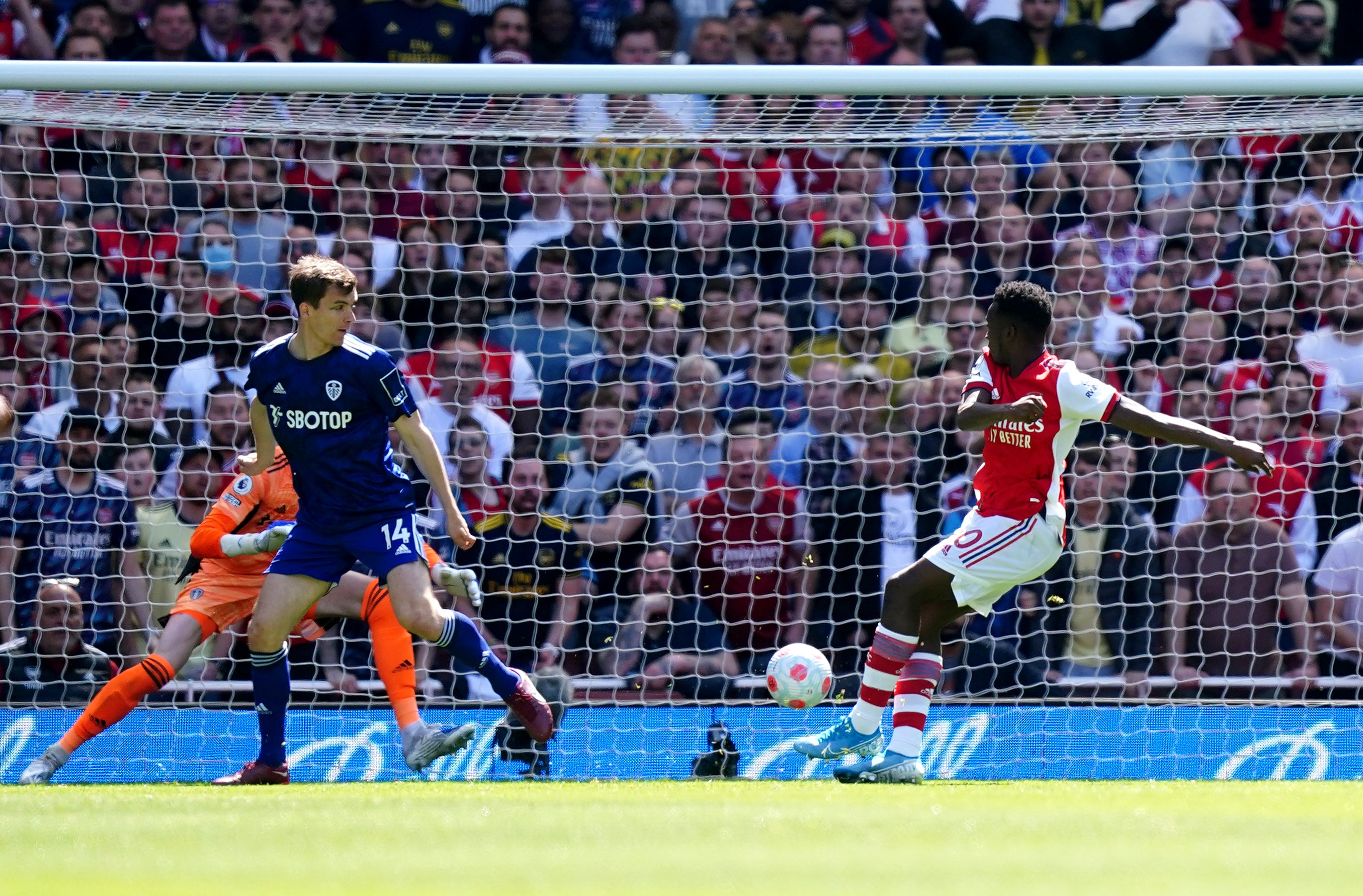 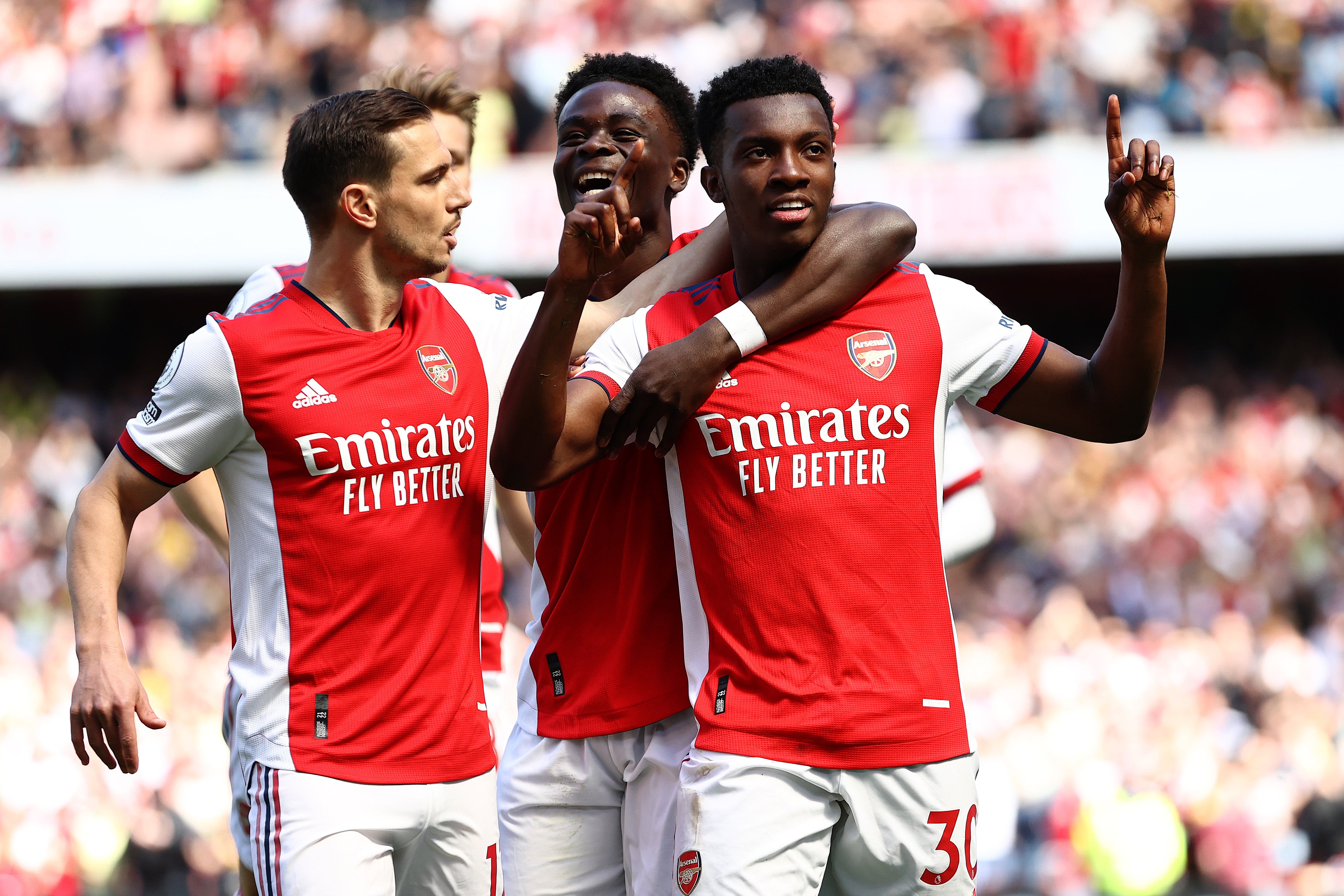 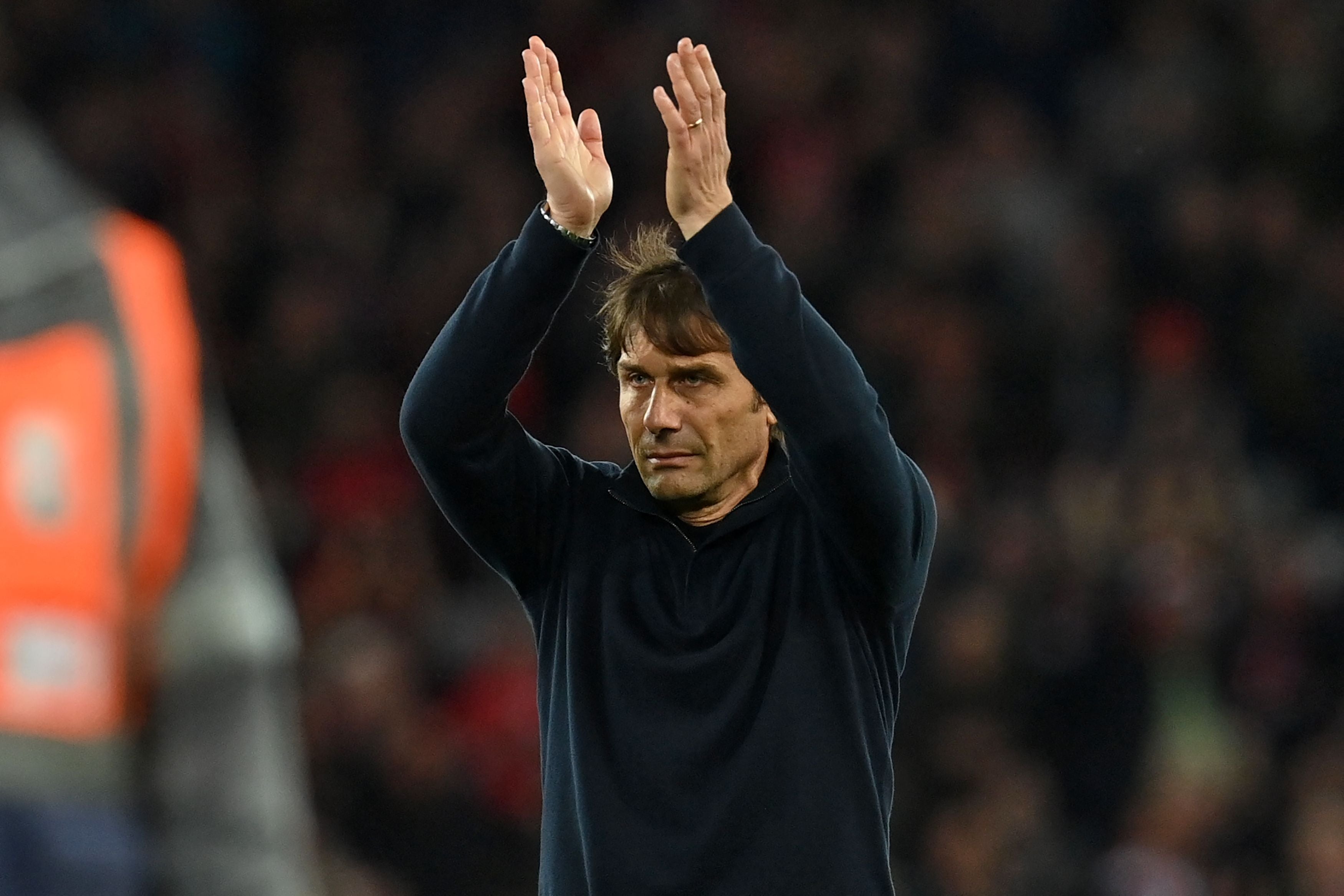 But it was ultimately up to the 22-year-old to seize that opportunity and two goals against Chelsea ensured he kept his place against Manchester United and West Ham, even once Lacazette was back fit. Another double against Leeds on Sunday epitomised what makes Nketiah such an effective outlet: his determination to close down Illan Meslier hounding the goalkeeper into an error before dropping smartly into space to receive Martinelli’s cut-back and sweep the ball home all inside the opening ten minutes at the Emirates.

And so now, as Saka starts to fatigue a little from his heroics, as Smith Rowe wavers in form and Martinelli suffers from a slight lack of killer instinct in front of goal, it is Nketiah who is running Arsenal’s anchor leg. It is not necessarily a situation many would have foreseen, but it is hardly a matter of fluke either. Arteta has instilled a rare sense of belief in a starting eleven that is on average the youngest in the league by almost a year. They have endured hollowing dips in form but emerged intact, even if aided by the volatility of the teams around them.

Nketiah was the one with a point to prove, who seemed to be stranded in the rear-view mirror as his teammates surged out of sight. But while the transfer window will undoubtedly have added motivation, his form is down to more than just individual interest. There is a collective desire Arteta has instilled, a burden of responsibility that is shared but has also been rotated, unlike in recent years when the onus has fallen on a few senior players. That bond only seems to have been emboldened by its trials and vulnerabilities too.

“Well, he is doing what he has done all season when he’s been sitting on the bench or sat at home – this boy doesn’t change that’s why we adore him,” Arteta said of Nketiah’s form. “Now, he has the right empowerment and the right personnel around him and he can be judged for what he does on the pitch.”

Regardless of where his own future might lead, Nketiah is the one now charged with carrying Arsenal towards the finish line. After Powell’s astonishing anchor leg in Beijing, he told reporters that he knew “the biggest thing” he could do at the Games was to help Bolt set three new world records. It was remarkably selfless and yet, equally, an achievement that may well have been impossible without him. Nketiah is the one now filling those shoes for Arsenal as the top-four race reaches its climax. So far, he has taken everything in his stride.