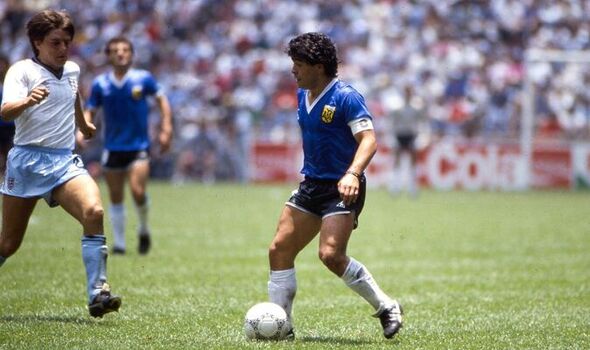 The Argentinian great described his opening goal in the quarter-final as “a little with the head of Maradona, and a little with the hand of God”. Four minutes later he dribbled past a host of England players to slot another beyond the reach of goalkeeper Peter Shilton, a strike voted “goal of the century”.

England midfielder Steve Hodge, who unintentionally flicked the ball to Maradona in the build-up to the memorable opener, swapped shirts with his rival after the game in Mexico City, which Argentina won 2-1. Hodge has owned it ever since.

The shirt, which has spent the last 20 years on loan at the National Football Museum in Manchester, sold at Sotheby’s yesterday for £7,142,500, an auction record for sports memorabilia.

The auction house said the No 10 jersey was in “good overall condition consistent with heavy use, perspiration and athletic activity”.

“This is arguably the most coveted football shirt to ever come to auction, and so it is fitting that it now holds the auction record for any object of its kind.”

The game came four years after Britain had defeated Argentina in the Falklands War.

A manuscript of the 1892 Olympic Manifesto held the previous record after it sold for $8.8million (£6.6million) in December 2019.