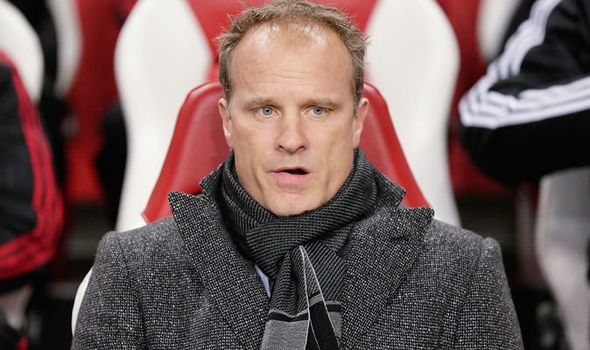 Arsenal legend Dennis Bergkamp has issued a strong message to director Josh Kroenke insisting Daniel Ek is “here to stay”. Bergkamp is one of three former Arsenal players part of the consortium led by Spotify founder Ek who hopes to buy the north London club. Thierry Henry and Patrick Vieira make up the trio of Invincibles backing the plans of the Swedish entrepreneur.

Last week, Ek insisted he had made contact with Kroenke Sports and Entertainment (KSE) with regard to a bid to buy the club.

The former Dutch forward insists Ek is in it for the long haul and hopes to at least speak to the Kroenkes himself.

“I understand that, in addition to that offer, Daniel has now reached out twice to Josh Kroenke and his bankers.

“Whatever Kroenke’s intentions are, it would be good if we at least have a conversation with each other. In the interest of the club. Regardless, Daniel is not a quitter and neither are we football boys.

“We are here to stay. The crazy thing is that we cannot imagine how the current players feel.

“Because we have always played for the championship ourselves. We know how the fans feel.

“We have already had a meeting with a supporter delegation. We also sense more and more enthusiasm on their side. That is very stimulating.”

He, along with Henry and Vieira, were part of the Arsenal side that went the entire 2003/04 league season unbeaten.

Bergkamp says the DNA of the club is no longer what it was at the turn of the century and that is something he wants to restore.

He added: “After I left the club I always kept in touch with Thierry and Patrick. And of course I continued to watch the games.

“I played an important part of my career there, I have had a testimonial there. The club is in my heart, I have become a fan of players.

“Just like Patrick and Thierry, I recognise the Arsenal from our own time less and less.

“The ambition to win top prizes is in Arsenal’s DNA. Never accepting to lose.

“That mentality has slowly disappeared. I sense resignation about the current situation. That is serious. As if, given the financial situation, it is normal for Arsenal to end mid-table. That does not belong to this club. Arsenal’s DNA must be restored.”