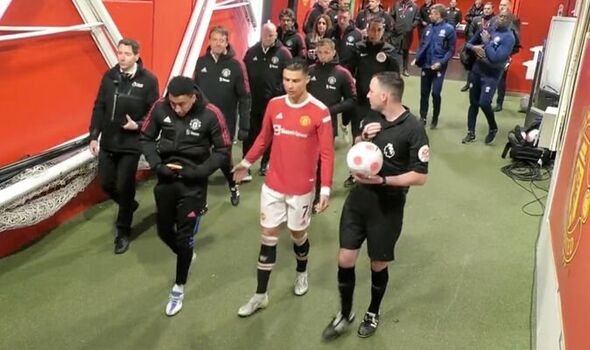 Cristiano Ronaldo was seen confronting referee Chris Kavanagh after having a goal disallowed during the first half of Manchester United’s Premier League clash with Brentford. The Portuguese was frustrated when he was adjudged to have been offside when he converted towards the end of the opening period.

Ronaldo endured a frustrating first 45 minutes at Old Trafford. He blasted a free kick straight at goalkeeper David Raya and had a penalty appeal waved away.

The veteran then thought he had put United 2-0 ahead after Bruno Fernandes’ opener. Ronaldo collected Fernandes’ pass and struck first-time under Raya.

It would have been Ronaldo’s 18th goal of an impressive personal Premier League campaign. However, a VAR review deemed the 37-year-old to have been slightly ahead of play when he struck a left-footed effort goalwards.

Ronaldo was seen complaining about the decision at the time and was then deep in discussion with Kavanagh as the teams re-emerged after half-time. The club icon – who returned last summer after 12 years away – caught up with the official in the Old Trafford tunnel.

Sky Sports footage showed Ronaldo talking at Kavanagh but not receiving much of an answer. The forward could also have been questioning the decision not to award him a penalty before his disallowed goal.

He entered the penalty area and went down under a challenge. Kavanagh quickly waved away the protests from Ronaldo and his United colleagues.

Those decisions appeared to fire up Ronaldo. He enjoyed a much better second half against the Bees.

Kavanagh finally pointed to the spot after Ronaldo was fouled by Rico Henry. The striker proved too strong for the left-back as he won back the ball, before Henry made a desperate challenge in retaliation.

An 18th goal of the season promptly followed, with Ronaldo thrashing his penalty into the right-hand corner of Raya’s goal.