Cristiano Ronaldo attended Real Madrid training in Riyadh on Friday with Los Blancos currently in the Saudi capital for the Spanish Super Cup.

Ronaldo, who joined Saudi Pro League side Al-Nassr last month on an eye-watering £175m-a-year deal, is yet to make his debut for his new side.

He is currently only training with them as he is serving a two-match FA suspension for slapping a phone out of an Everton fan’s hand last season while he played for Manchester United. 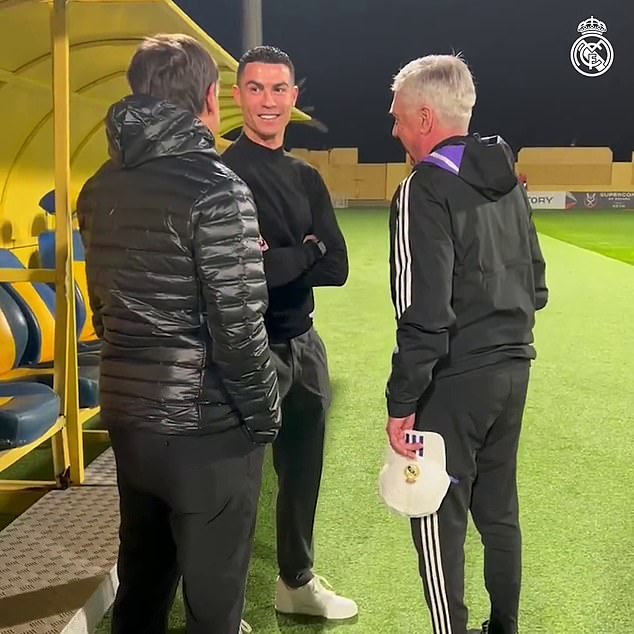 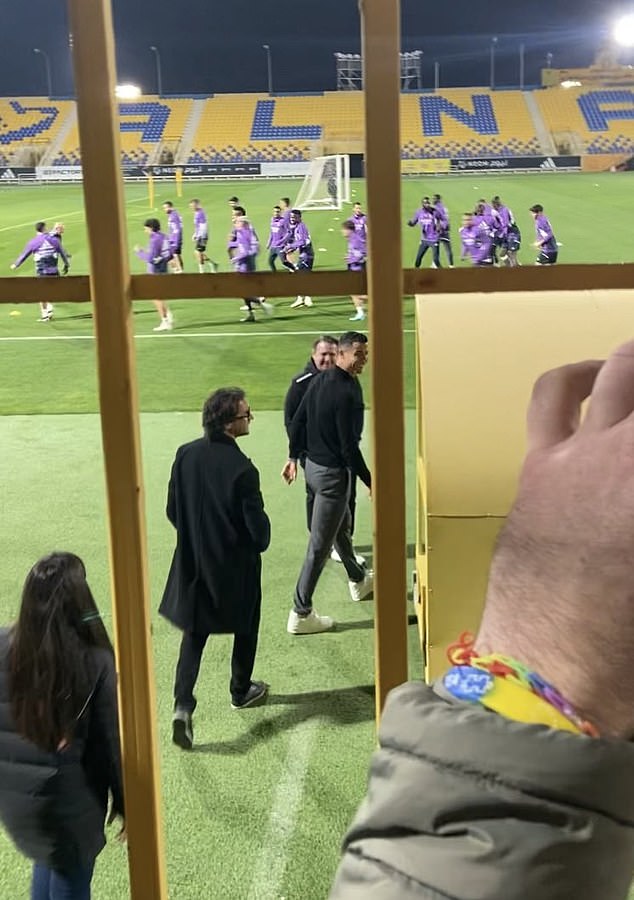 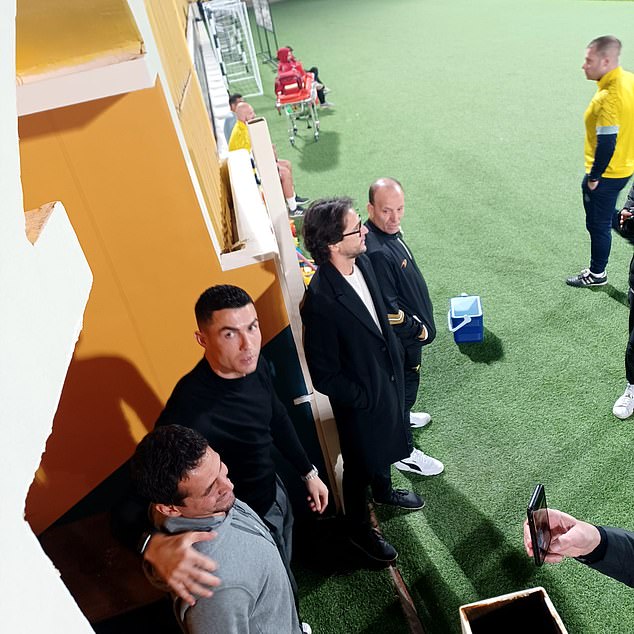 However, he took time out of his schedule to watch his former team in training ahead of their Spanish Super Cup final with Barcelona.

Ronaldo spent an illustrious nine years with the Spanish giants between 2009-2018, scoring 450 goals in 438 games for the club.

He is arguably their greatest-ever player and won 14 trophies with Los Blancos, including four Champions League titles. 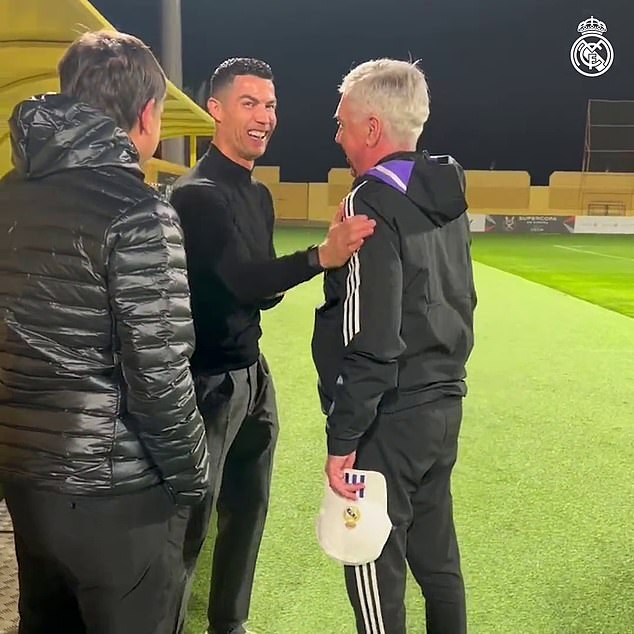 Ronaldo caught up with Carlo Ancelotti, who managed him at Real Madrid from 2013-2015 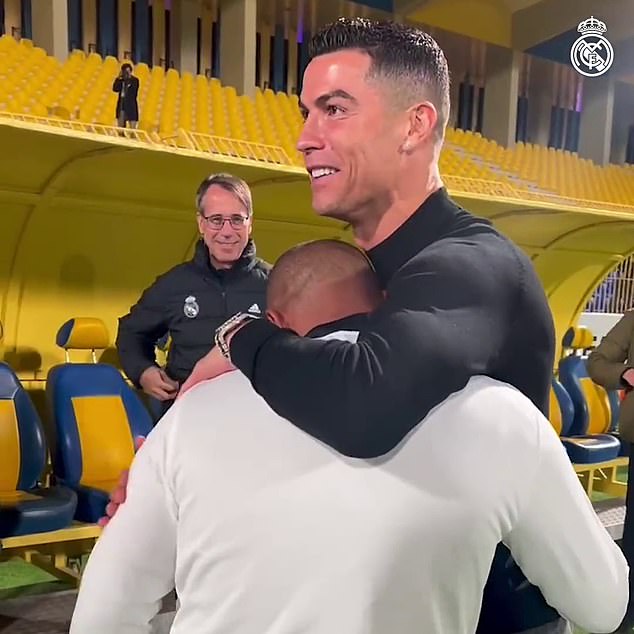 The 37-year-old was seen watching Carlo Ancelotti’s side go through their paces and posed for photos with fans.

He was then filmed talking with the Real boss who managed him at the Bernabeu from 2013-2015, while he also caught up with, and embraced club legend Roberto Carlos.

The Spanish Super Cup takes place in Saudi Arabia and is a four-team tournament – it consists of the winners and the runners-up of LaLiga and the Copa del Rey – this year’s competition consisted of Real Madrid, Barcelona, Valencia and Real Betis.

The El Classico rivals will now face off in Sunday’s final at the King Fahd International Stadium. 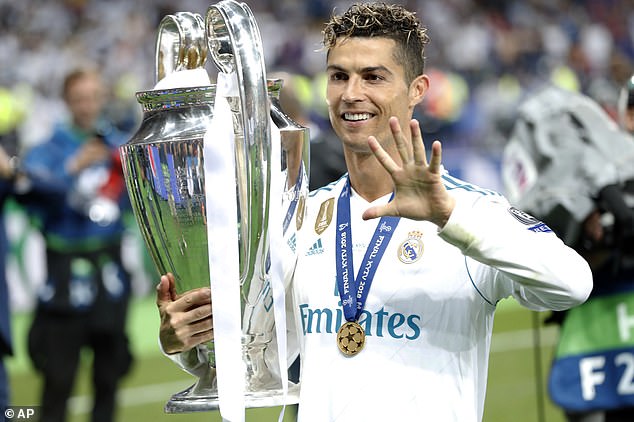 Ronaldo spent an illustrious nine years with Real, scoring 450 goals in 438 games for the club 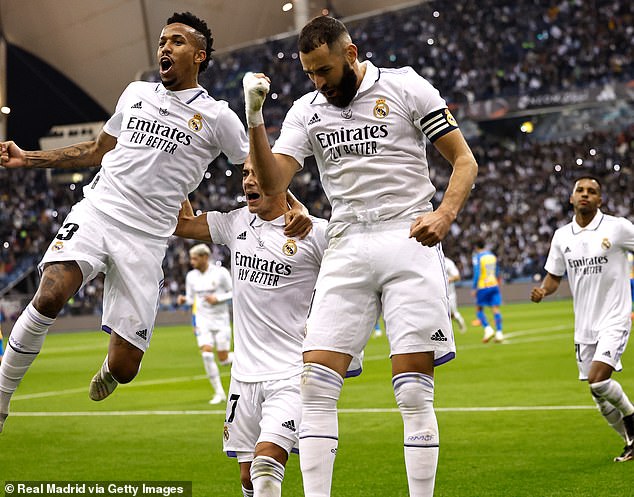 Ronaldo seemed in good spirits as he watched his former team-mates in action.

He is set to play his first game in his new country next Thursday as part of a combined Al-Nassr/Al-Hilal team take on PSG.

This will see the Portuguese star pitted against his old rival from his El Classico days, Lionel Messi.

ESPN reported the match had more than two million online requests for tickets, with the game selling out within minutes after going on sale.

Furthermore, a ‘golden ticket’ for the clash is currently selling for £2.2m, with businessman Mushref Al-Ghamdi leading the bidding in the auction.