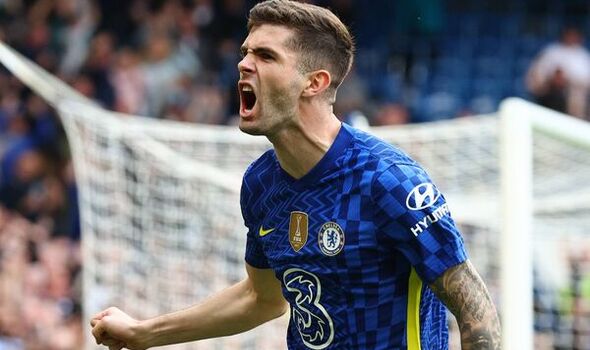 Christian Pulisic is reportedly one of three Chelsea players listed on Juventus’ transfer shortlist this summer. The USA international has struggled to make an impact for Thomas Tuchel’s side this season with recent reports indicating his future could lie away from Stamford Bridge.

Pulisic’s father Mark took to social media to vent following another cameo appearance as Chelsea suffered a shock defeat at relegation battlers Everton on Sunday. The now-deleted Tweet read: “The sad thing is he loves this club, teammates, and London.… puts his heart and soul into being a pro. Onwards and upwards my boy…big 6 months ahead..”

The forward has been hampered by an ankle injury and a spell on the sidelines with coronavirus, and has been used a substitute for 17 of his 33 appearances this season. The former Borussia Dortmund forward has still scored seven goals and registered two assists, but has evidently grown frustated at his place in the pecking order.

Kai Havertz, Mason Mount and Timo Werner have seemingly emerged as Tuchel’s preferred attacking trio in recent weeks, with Pulisic joining the likes of Romelu Lukaku and Hakim Ziyech as bench options. The £58million signing has not completed a full 90 minutes since March 5, when he contributed a goal and an assist in the 5-0 thrashing at Burnley.

Juventus were credited with an interest in Pulisic last month by Gazzetta Dello Sport ahead of a possible summer move. This report has now been backed up with a fresh claim from fellow Italian outlet Tutto Sport, who list the forward on a 15-man shortlist of summer targets for Massimiliano Allegri.

Pulisic is one of five forwards reportedly shortlisted alongside Antony, Angel Di Maria, Giacomo Raspadori, Nicolo Zaniolo. The out-of-favour Chelsea attacker is also joined by team-mates Jorginho and Emerson Palmieri on the list, with Juventus said to be looking at reinforcements across the pitch.

Tuchel handed Pulisic his senior debut at Dortmund in January 2016, and three years later the promising attacker earned his move to the Premier League. Despite this current status as a bit-part player, the 23-year-old recently insisted he was enjoying working under the German manager once again.

Pulisic told the club’s website in February: “It’s been good so far. We’ve got a new outlook on things, we have had a really good win so it’s been a positive start. It’s been some crazy times recently and just to get a win left all the guys in the changing room really excited. We have had a lot of fun in training and there are smiles on faces which is good to see.”