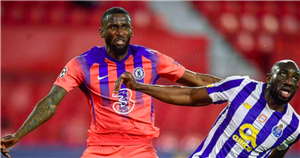 Chelsea star Antonio Rudiger has been sent messages of support from his team-mates after the win against Porto in the Champions League.

Mason Mount and Ben Chilwell both were on the scoresheet as the Blues beat the Portuguese outfit 2-0 in Sevilla.

It gives the London outfit two vital away goals going into the second leg, which will also be played at the Ramon Sanchez-Pizjuan Stadium.

Given the fact Chelsea were thrashed in their last outing by West Brom, this was quite the reaction.

There was an inquest after the Baggies demolished the Blues 5-2 at Stamford Bridge and a heated response from some players.

Rudiger, who did not play against Sam Allardyce's men, was involved in a training ground altercation with Kepa Arrizabalaga – with fresh details emerging over the scuffle.

Thomas Tuchelcalled the incident "serious" and had to sent the two home early from the session but the German defender was in the line-up on Wednesday night.

And he performed brilliantly, keeping Porto at bay along with Andreas Christensen and Cesar Azpilicueta in the backline and Edouard Mendy in goal.

After the win, the former Roma star posted on Instagram to insist the tie is now over, captioning a picture: "Half way done. great fight. great spirit #cleansheet #Hustle #AlwaysBelieve @chelseafc @championsleague."

Several Chelsea players responded to the 28-year-old, including Chilwell, Callum Hudson-Odoi and Tammy Abraham, who all replied with a series of fire emojis.

It has been a whirlwind few months for Rudiger, who was also accused of being a disruptive influence with Frank Lampard in charge.

The Blues legend ostracised the Germany international in favour of Kurt Zouma and Thiago Silva in a back-four.

But after the dismissal of Lampard and appointment of Tuchel, Rudiger has been an integral part of a defence that has now kept 13 clean sheets in 16 matches.

Despite their improved form, Chelsea still find themselves out of the top four of the Champions League after West Ham nudged above them with a win over Wolves on Monday night.

Tuchel's men take on Crystal Palace on Saturday in need of a win with the likes of Tottenham and Liverpool also ready to pounce.

That is before the Blues take on Porto again with a two-goal lead to protect.

READ MORE: Three things Thomas Tuchel got right and one he got wrong as Chelsea beat Porto