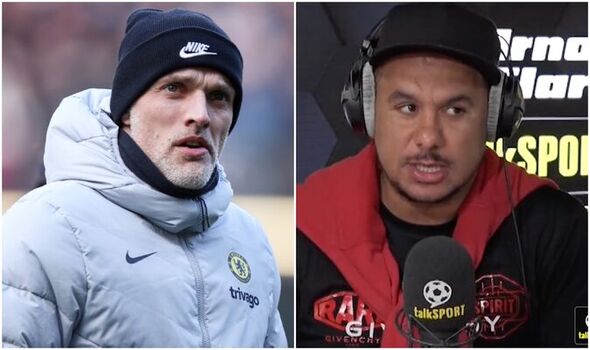 Chelsea boss Thomas Tuchel’s claim that the Stamford Bridge pitch has contributed to his side’s recent poor home performances has been slammed by former England forward Gabby Agbonlahor. The German blamed the turf for Andreas Christensen’s error that led to Arsenal’s first goal in the Gunners’ 4-2 victory on Tuesday night.

Christensen’s backpass to goalkeeper Edouard Mendy was too short, allowing Eddie Nketiah to race away on goal and finish past Mendy. Nketiah went on to score again following another defensive mistake as Arsenal reinvigorated their Champions League hopes with a thumping win.

It culminates a difficult few weeks for Chelsea on the pitch, while the takeover saga rumbles on behind closed doors. Tuchel’s side progressed to the FA Cup on Sunday, but were smashed 4-1 by Brentford three weeks ago, were then dumped out of the Champions League by Real Madrid, and have now been beaten by Arsenal.

Tuchel has partially blamed some of Chelsea’s struggles on the Stamford Bridge pitch. Asked why Christensen was withdrawn at half-time, soon after he contributed to Arsenal taking the lead, the 48-year-old insisted: “He said he cannot continue. I do not substitute a player for one mistake. The pitch is difficult to play here, maybe it sounds like an excuse but it is a very difficult pitch here, not to our favour.

JUST IN: Man Utd agree on five priority summer signings while ’18 could leave’

“The ball bounces very awkwardly in front of Andreas but still we had the same mistake against Real Madrid that cost us the next round in the Champions League. This one cost us this match.”

However, former Aston Villa striker Agbonlahor was not having the excuse. He quipped that the club’s groundsman might have disappeared after Tuchel openly criticised the playing surface.

The talkSPORT host said: “I bet the groundsman’s hiding! Maybe they could cut out that little bit of the pitch [where Christensen made his error] and maybe they won’t make the mistake again.”

Co-host Alan Brazil, who enjoyed a professional career with the likes of Ipswich Town, Tottenham and Manchester United, added: “I played there when they first built the stand, you know the big tall one along the touchline. They put sand down along that side. The pitch was murder, absolute murder.”

However, Agbonlahor was not buying the excuses. He concluded: “It’s nonsense!”

Chelsea are third but could face having to clamber their way into the Champions League if their poor form continues. They still face tough Premier League fixtures against West Ham and Manchester United in the next week.

The Blues sit on 62 points, five ahead of fourth and fifth-placed Tottenham and Arsenal.