Jacob Butterfield has proven time and again that he can do it on a cold wet windy night in Stoke. But can he do it on a sultry Sydney afternoon or in an early evening deluge in tropical Queensland?

Melbourne Victory's new English midfielder has no doubts he can, ahead of the club’s season-opening match against Brisbane Roar on Saturday night. 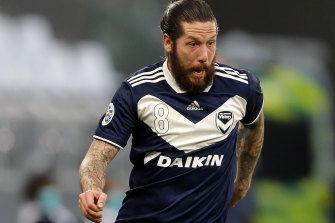 At the same time, an eight-year-old Butterfield was scouted by United and won a place in the powerhouse club's academy, where he stayed for eight years.

"I would have been seven or eight, just starting in the academy when he was there as a reserve-team player, so I never came across him as he was much older," Butterfield said.

"United was a great place and I learned a lot, but when I was 16 or 17 I really wanted to play so when I left school I went full-time at Barnsley. They were in the Championship and it was an easier path through for young players and I ended up playing first-team football at 17.

It was that injury which destroyed his dream of playing in England's elite competition, the Premier League.

"I got a move to the Premier League with Norwich but it didn't quite work out with the injury. I was on the bench for a handful of games, I played in Cup games. I was injured for most of the time I was there.

"I had a four-year deal, but because I had been injured I wanted to get back playing as soon as possible so I pushed for a move and I went to Middlesbrough in the Championship just to play more football. Then I had spells at Huddersfield, Derby and Sheffield Wednesday. I ended up spending the next seven or eight years in the Championship with great clubs."

The Championship is an attritional league that places huge demands on players.

"There is a lot of quality there too, there are some brilliant teams and players. So many go from the Championship to play in the Premier League and into international football, so for me to play at that level for 13 years I think is pretty good going."

In his last season in England he played at Luton Town alongside Callum McManaman, another of Victory's new signings, but the fact they are both in Melbourne is purely coincidental.

"I felt like I really wanted to broaden my horizons, get some different experiences," Butterfield said.

"I am good friends with David Ball, who is at Wellington. He said such good things about football over here and it was his agent that said, 'Do you want me to speak to clubs for you?'. Melbourne were interested, and here I am."