Carlo Ancelotti believes the race to qualify for Europe will go down to the final day of the Premier League season, and he remains confident his Everton side will be in contention despite failing to win any of their last five encounters.

The Toffees head into Friday’s match against Arsenal – live of Sky Sports – in eighth, three points ahead of the Gunners, and six behind fourth-placed Chelsea with a game in hand.

Everton have taken just three points from their last five Premier League matches to dilute hopes of Champions League qualification, but Ancelotti says his players are ready for the run-in.

“We’re still in contention and we’re going to be in contention until the last game,” the Everton boss vowed to Sky Sports. “The race will not be decided before. There are a lot of teams involved and a lot of matches still to be played. We still have to play against West Ham and we still must play Aston Villa twice.

“The Arsenal game is clearly important, but then West Ham are also playing against Chelsea and Liverpool has to play against Manchester United so it’s so, so complicated to give a count [points target]. For sure, we’re going to fight until the end.

“All the games are really vital. It’s important that we now have most of the squad available because in the last game, I had a lot of young players on the bench, and I didn’t really have the opportunity to make many substitutions.”

The images of a smiling Dominic Calvert-Lewin in training could be just the boost the Toffees need after more than six weeks without a win, having had to field patched-up teams.

They were held to a 2-2 draw at home by Tottenham last week and Ancelotti saw positive signs in that performance which he wants replicated for the rest of the campaign. The Everton boss described the point earned in Jose Mourinho’s last game in charge of Spurs as his side’s ‘best home display of the season’, highlighting the aggression and intensity on show.

While outlining his goal of winning five of the remaining seven games to secure a European place, he wouldn’t reveal if he would throw caution to the wind in order to achieve that objective. 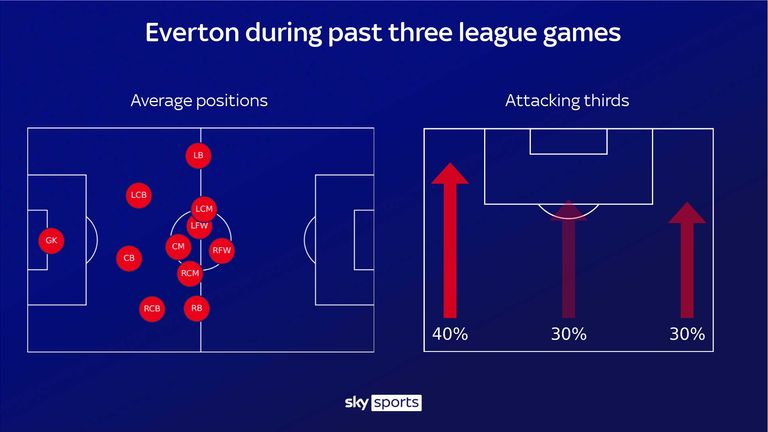 “It depends on the spirit of the team and the strategy you want with the players you put in place. If I ask the players to stay back and use the counter-attack, of course, it would not be an active proposal of playing. But if I tell them to press forward and to try to regain the ball high up in the opponent’s half, it’ll be more so.

“Ultimately, it all depends on the game. Of course, we’d like to play all the time in the opposition’s half but it’s not always possible.”

In the absence of Calvert-Lewin in Everton’s past two encounters, greater responsibility has fallen on the attacking output of Richarlison, James and Gylfi Sigurdsson. The latter pair have not always been part of winning Everton sides this season, but there have been increasing signs of their ability to work together through being handed more defined roles. 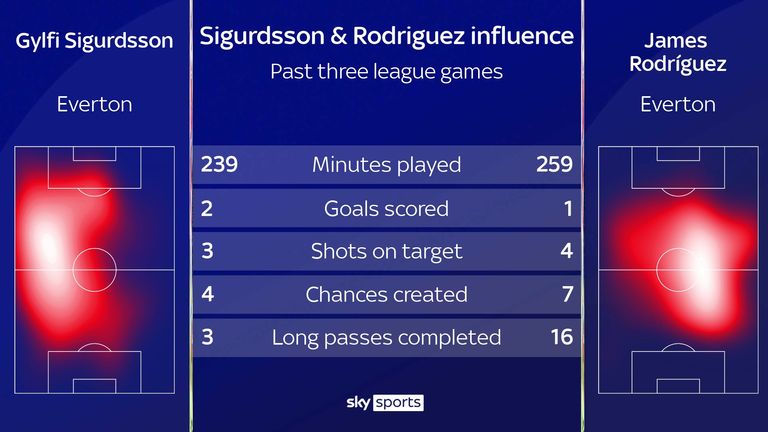 Sigurdsson operated successfully off the left channel against Spurs, and the midfielder is enjoying a rich vein of form – involved in five goals in his last seven Premier League games (three goals, two assists) – as many as in his previous 23 in the competition.

When asked about the understanding between Sigurdsson and James, Ancelotti said: “They’re the players who are more involved in the offensive play. Against Tottenham, James was playing as the No 10 and Gylfi was a little bit on the left. But Sigurdsson has the intelligence to be able to find the right position when we have the ball.” 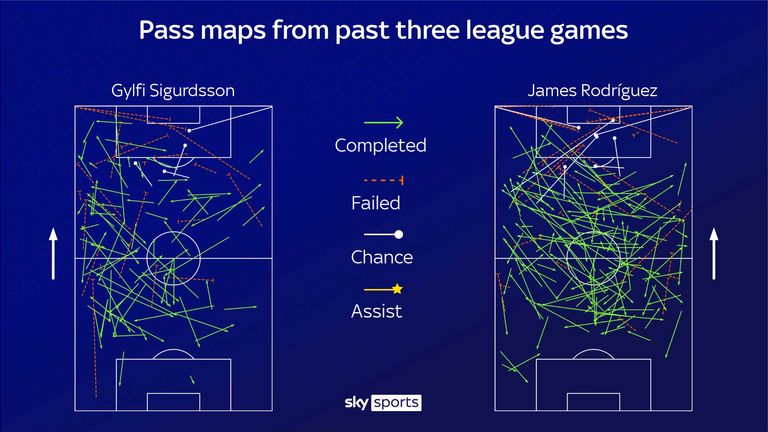 Following Everton’s blistering start to the campaign, which saw the side win their opening seven games in all competitions, inconsistent performances at home coupled with regular injuries to key personnel have derailed the team’s European aspirations.

Only West Brom (30) have used more players than the 29 Ancelotti has used in Premier League matches this term, while the 79 changes already made to his starting line-up works out on average at 2.5 per game – the same as last season.

Ancelotti, who will be boosted by the availability of Yerry Mina, Bernard and Fabian Delph at Arsenal alongside the returning Calvert-Lewin, has frequently alternated between using a back three with wing-backs and a back four, but the Italian is aware of the system he would ideally use.

When asked if having a consistent defence is essential for success, he said: “It’s an interesting question. I feel like defending with four players is the best option. Sometimes, we’ve defended with five because I didn’t have the possibility of doing any different.

“I’m not frustrated about this as we’ve to manage the injuries and situation above all in this special season. We’ve had some long-term injuries like the one to Lucas Digne, who was out for two months, Allan was also out for two months, James (Rodriguez) and Richarlison have both been out.

“We’ve had both our right-back and our left-back out at the same time, so it’s true that I’ve changed our shape at times, and the strategy. I’ve changed our line-up quite a lot, but it’s also true that the players have managed these changes well. 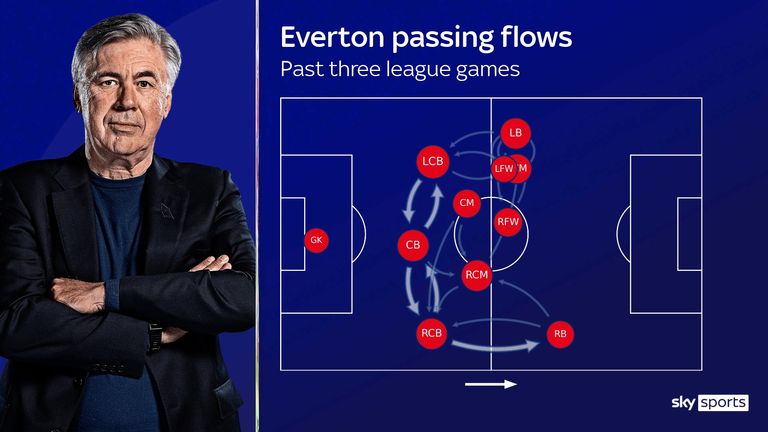 “But the shape we’ve changed this season has been forced by the injuries, and not by the idea that I am a manager that likes to change.”

It has been a turbulent week for football which saw Everton’s next opponents Arsenal backtrack on plans to join a breakaway European Super League.

Ancelotti spoke passionately at Thursday’s press conference against those clubs who had disregarded the opinions of players and fans – but he insists his squad is focused on the task of ending Everton’s run of 24 Premier League games without an away win against the Gunners, stretching back to January 1996.

While the game has been brought into disrepute by the events of the past few days, Everton were boosted by the news of director of football Marcel Brands signing a three-year contract extension.

The Dutchman, who arrived at Goodison Park in June 2018 and joined the club’s board the following January, voiced his encouragement at the progress being made both on and off the pitch in light of the planning permission being granted for the proposed new 52,888-capacity stadium at Bramley-Moore Dock.

Brands has an important summer ahead in supporting Ancelotti’s plans, and the Everton manager is delighted that the partnership has been extended.

“My relationship with Marcel started when I arrived here a year or so ago as before then I didn’t know him,” Ancelotti said. “I’d never met him before, but I found a director with a lot of knowledge. I found a good human being, someone who is very good with personal relationships. “His contract is a sign of the club’s stability and we want to continue with this arrangement. We’re on the right path. The fact that I can work alongside him for another three years will be good for us and for the club for sure.

“He’s doing really well with the scouts and he has a strong team working on this [player recruitment]. We’re on the lookout for young players and we’re trying together to improve our academy. We’re on our way in our project to achieving the results we want in the future.”

When asked about whether transfer targets have been outlined already this summer, Ancelotti added: “I have a chat every day with Marcel and we’re really close but for now we’re focused on the games that we have to play. It’ll be important for our future the position we reach in the Premier League this season.

“But the scouting department is working every day on bringing in new players.”

What has been apparent in recent weeks has been the inclusion of Nathan Broadhead, Isaac Price, Reece Welch and Kyle John in matchday squads, largely due to the injury crisis Ancelotti has been managing – but the experience of training and travelling with the first team will serve them well in the future.

For a club that is richly steeped in blooding academy players, it may come as a surprise that Everton have handed out one of the fewest totals of Premier League minutes to players both under the ages of 21 and 23.

But with the average age of the starting XI still the seventh youngest in the division at 26 years and 245 days, both Brands and Ancelotti are fully aware of the importance of striking the right balance in providing opportunities and building a side that is battled-hardened to compete in one of the world’s toughest leagues.

A nod to the progress being made at age-group level is that Everton Under 18s have reached the FA Youth Cup quarter-finals under manager Paul Tait, achieved through late goals in each of the previous two rounds against Manchester City and Chelsea respectively.

Ancelotti believes the development – and resilience – shown in such significant scalps will help create the winning mentality necessary in shaping Everton’s future.

“This season, a lot of these players stayed with us and trained with us,” said Ancelotti. “I found some really good, talented players.

“We’re all working together and for sure some of them will soon be in the first team because for their age, they have a lot of quality. It means the work that all the managers in the academy are doing on these you guys is really good.” 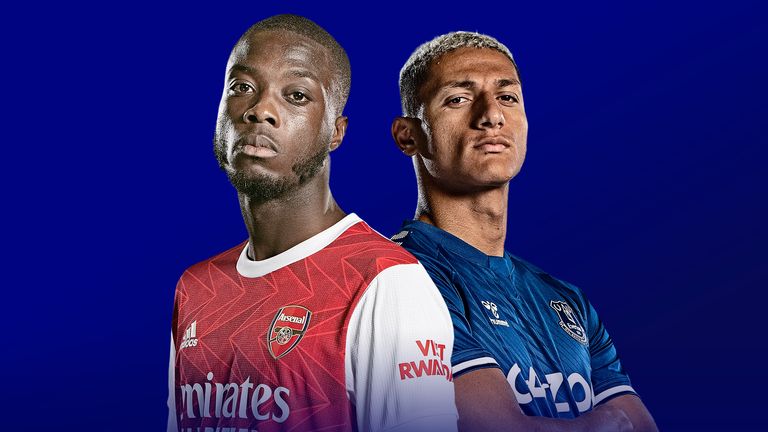 Arsenal vs Everton will be shown live on Sky Sports Premier League and Main Event from 7.30pm; kick-off 8pm. Sky Sports customers can watch in-game clips in the live match blog on the Sky Sports website and app.