Gary Lineker has described him as a perfect Harry Maguire replacement. Ilkay Gundogan once said he is second only to Virgil van Dijk in the Premier League. Jamie Carragher “loves” watching him. Caglar Soyuncu has made quite the impression at Leicester.

The 24-year-old certainly stands out – and not just for the chiselled jawline and flowing locks some have likened to Lord Farquaad from the Shrek films. No, what’s most striking about Soyuncu is his style of play; how he blends the physical and the technical. He’ll happily smash a loose ball into the stands but he’s partial to a Cruyff turn in his own box too.

His emergence at Leicester has been one of many success stories under Brendan Rodgers. Last season, he ensured they did not miss Maguire following his departure to Manchester United. Now, he is helping them fight for a top-four finish and FA Cup glory.

The Turkish international, an £19m signing from Freiburg in 2018, still prefers to conduct interviews with the help of an interpreter but it is clear from speaking to him that he is settled in England and relishing life with his “friends” in the Leicester dressing room.

“Me and my friends, we are all feeling so good at the moment,” he tells Sky Sports. “We are enjoying ourselves on and off the pitch and we are going to do our best to finish the season on a high.”

And what a high it could be.

Leicester are well-placed for a Champions League finish in the Premier League – two points closer to second-placed Manchester United than they are to West Ham in fifth – and next month’s FA Cup final against Chelsea gives them a shot at silverware too.

“It has been a long time since the club has been in a cup final, so this is great for us,” says Soyuncu. “Obviously we have to finish the job and win it – that would make it even more meaningful.

“But we are really proud to be there and we will do our best to win every single one of our remaining Premier League games as well.” Those remaining Premier League games pit Leicester against Manchester United, Chelsea and Tottenham, among others, but they will approach them with confidence and why shouldn’t they?

After all, few clubs expose the folly of the European Super League project quite like Leicester – Premier League title winners only five years ago and now upwardly-mobile again under Rodgers.

Soyuncu believes they are right where they belong.

“I don’t see us as underdogs,” he says. “We had a great season last season as well. Before the Covid break, we were doing so well, so it isn’t a surprise to us where we are now.

“Whether it’s a surprise to others, I don’t know, but we did really well last year and we expected it again this season.”

What they didn’t expect, however, was that they would have to cope without Soyuncu for so much of it. The centre-back was practically ever-present alongside Jonny Evans last season but this time around he has had to endure spells on the sidelines.

A persistent abductor injury caused him to miss several months of action between October and January. More recently, he had to sit out back-to-back games against Manchester City and West Ham after contracting Covid while on international duty. 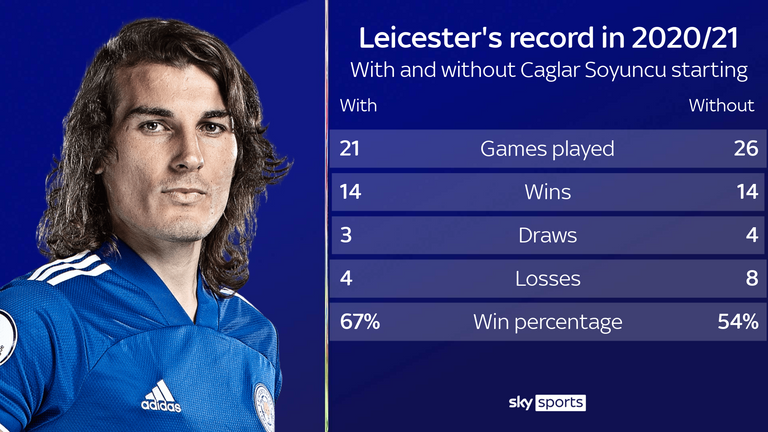 It is perhaps no coincidence that Leicester lost both those games. Wesley Fofana has shown huge potential in his absence but the side’s record when Soyuncu plays – they have only lost four of the 21 games he has started this season – is notably better.

Leicester have certainly benefitted from his presence lately, winning the last six games in which he has featured, including their FA Cup ties against Manchester United and Southampton, with Rodgers deploying Soyuncu on the left of a back three.

Soyuncu insists he has no preference between systems – “whether the manager plays with two centre-backs or three, we adapt,” he shrugs – and puts his impressive performances down to the team-mates and coaches around him.

“Since my early days at the club, I have always been supported by everyone here – not just the players but the gaffer too. He gives me playing time and I’m grateful for that.

“The team spirit here is great. The staff members and the players, we are a tight family group. When you feel you are supported and they believe in you, you give your best and you perform better, so that’s what I’ve been trying to do.”

Soyuncu is a key figure for Leicester now but he had to show patience following his arrival from Freiburg in 2018, making only seven appearances in his first six months at the club as former manager Claude Puel opted to bed him in slowly.

It would have been easy for disillusionment to set in but Soyuncu, a popular figure around the club known for his positive outlook and mischievous sense of humour, never doubted himself.

“Every player wants to play every game and I’m no different. But when I first arrived, I knew it was going to be some time before I broke into the team. I was doing my best in training and on the pitch and I knew my time was going to come.

“I’m not a person who sulks. I don’t get upset with situations like that. I knew my time was going to come and it’s not in my character to give up, so I didn’t. 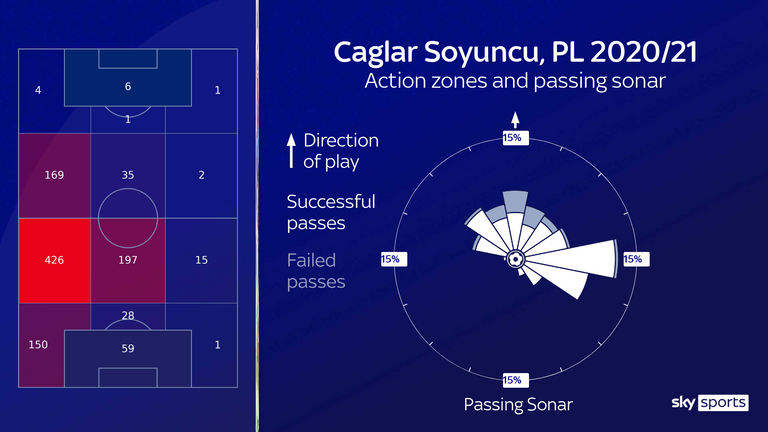 “I had reasons not to as well. First of all, it’s just not something that’s in my character, and second of all, I wanted to do well for my country and continue representing them.

“That’s why I waited for my turn and eventually it came.”

Soyuncu ultimately had to wait for Maguire’s departure in order to get his chance but the outlook became brighter from the moment Rodgers arrived at the King Power Stadium that February. 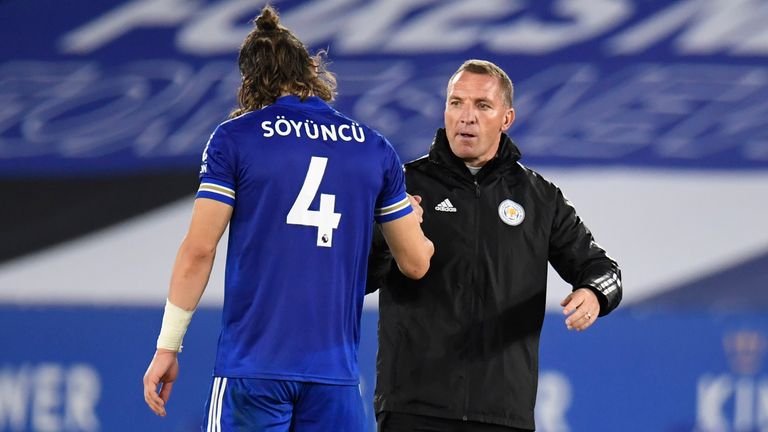 “He knows his players well, that’s the second thing, and he knows how to get the best out of them for that reason.

“As a human being, he’s a great man on and off the pitch. I believe that with him in charge, there’s a great opportunity for all the young players at Leicester to get into the team.”

Soyuncu knows that from experience and there are sure to be more plaudits if he can help Leicester carry their recent momentum through to the end of the season. “I always try to do my best,” he says with a smile. “Hopefully we will end up where we want to be.”