Socceroos coach Graham Arnold, a former player for United in the old National Soccer League, watched on from the stands as Arzani and the Bulls ran rings around their opponents, who beat A-League champions Western United and Brisbane Roar to become the first NPL team to reach the cup final. 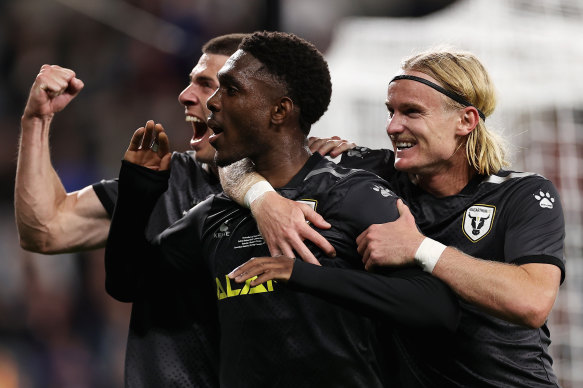 Al Hassan Toure celebrates after opening the scoring for Macarthur FC from the penalty spot.Credit:Getty

As expected, United had the vast majority of support among the 16,416-strong crowd at CommBank Stadium – the second-biggest for a final in the tournament’s short history – with thousands of the most hardcore fans packing into the northern end to provide a raucous, intimidatory atmosphere that, at times, threatened to boil over. At the other end, roughly 100 Macarthur fans attempted in vain to provide some sort of vocal response.

On the pitch, the Croatian-backed side gave as much as they could, but more than a month on from their last league outing in the NSW NPL, it was inevitable that Macarthur’s superior fitness and skill would shine through – and so it proved, as the A-League’s newest club won its first trophy and, with it, a berth in the AFC Cup, Asia’s second-tier competition. Two penalties, one in each half, also gave rookie manager Dwight Yorke a cup win in the first tournament he’s ever coached in.

Arzani led the charge for the Bulls from the outset as he prepares to mount a case for Socceroos selection over the opening rounds of the A-League Men, which begins next weekend. Four years since starring for the Socceroos at the 2018 World Cup in Russia, Arzani’s career has clearly not gone to plan, but the talent that once had Australia buzzing is still there, now matched with a level of maturity and fitness that wasn’t previously. He was a constant thorn in United’s side.

The 23-year-old delivered the corner that almost gave Macarthur the lead 13 minutes in, when Jonathan Aspropotamitis’ deflected header was saved by United’s goalkeeper Danijel Nizic, but they didn’t have to wait much longer for the breakthrough. 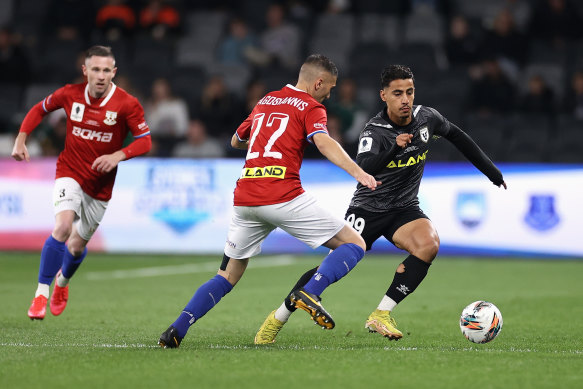 Just after the half-hour mark, Anthony Tomelic brought down the lively Ulises Davila in the box, prompting referee Daniel Elder to point straight to the spot. Al Hassan Toure, who starred for Adelaide United in the final when they won the then-FFA Cup in 2019, had to fight off Davila and Arzani for the right to take the resultant penalty, but stood over the ball with confidence and dispatched it into the back of the net accordingly – then strode straight towards Sydney United’s hostile support, put his hands around his ears and taunted them.

That made Toure, like Arzani, a target for boos for the remainder of the match, but neither player – nor any of the Bulls, for that matter – allowed the treatment to get under their skin.

The Bulls had plenty of chances to extend their advantage but were invariably foiled by Nizic, the woodwork – in the case of attempts by Lachie Rose and substitute Anthony Carter – or by their own hand, like when Tomislav Uskok’s second-half header went wide.

Their failure to finish off United, who twice came from behind in their wins over Western and Brisbane, meant there was always a chance the underdogs could come back late. But when Cristian Gonzalez fouled Craig Noone in Macarthur’s box in the dying minutes, that was that – Davila stepped up, took the penalty, and got the celebrations started early.