Bulls brought back to earth by plucky Mariners in home opener

Macarthur FC have been upstaged in their historic first home match by the Central Coast Mariners, who have notched consecutive A-League wins for the first time in more than three years.

There was a palpable buzz at Campbelltown Stadium on Sunday as the Bulls set out to back up their stirring first-up victory over the Western Sydney Wanderers four days ago. 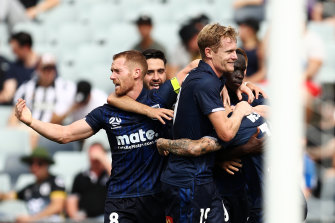 Daniel De Silva and his Mariners teammates celebrate their first goal against Macarthur.Credit:Getty

But the Mariners spoiled the party, prevailing 2-0 courtesy of goals from Daniel De Silva and Jordan Smylie – their second straight win to open the new season, having also beaten the Newcastle Jets on New Year's Eve.

Counting their win over Melbourne Victory in the final match of the 2019-20 campaign, it also marks the first time Central Coast have strung together three wins in a row since February 2017.

It was a disappointing comedown for the Bulls, who lacked imagination in attack and were too often exposed in defence despite being willed on by 4538 cowbell-jangling supporters – a solid enough turnout, in light of the current COVID-19 outbreak in Sydney.

Macarthur might be the A-League's newest addition but the Mariners also feel like a new team. Wooden spooners in four of the past five seasons, coach Alen Stajcic's men appear to have a newfound steel and spirit about them, and no longer play like pushovers. 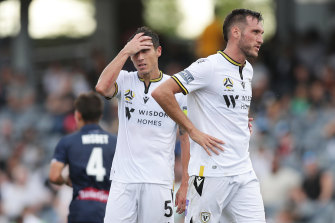 The match quickly settled into a clear pattern: the Bulls dominating possession but struggling to craft any genuine openings, while the Mariners sat back and occasionally threatened on the break.

That's how the opener came about in the 35th minute. Macarthur turned the ball over and the visitors pounced, with the lively Josh Nisbet surging down the right flank. He cut the ball back to the top of the penalty box, where De Silva beat Loic Puyo to the ball and poked home his finish. Adam Federici, the hero of their win over the Wanderers on Wednesday night, could do nothing about it.

Eight minutes later and Central Coast almost struck again. A long ball from Oliver Bozanic unleashed the dangerous Alou Kuol, who had acres of space in front of him and Aleksandar Susnjar on his tail. This time Federici managed to get a hand to Kuol's scuffed finish but it was another warning for the Bulls.

Coach Ante Milicic shuffled his pack at half-time, bringing on Benat Etxebarria for fellow Spaniard Markel Susaeta as they mounted a search for an equaliser.

Their best chance came with 15 minutes to go when Ivan Franjic forced a strong save from Mark Birighitti, who tipped his long-distance shot wide, while substitute Lachie Rose spotted Matt Derbyshire with a cross late in the second half, only for the Englishman to balloon his header over the target.

With so many men committed forward, there was always a danger the Bulls would let in another – and so it proved in the 89th minute when Lewis Miller sent Daniel Bouman into space down the right wing through another lethal Mariners counter-attack.

Bowman had all the time in the world to pick out Smylie with his pull-back, and the 20-year-old made no mistake, scoring his first A-League goal and sealing three vital points for his side.