Brighton eased any fears of relegation with a convincing 2-0 win over Leeds that took them 10 points clear of Fulham in the drop zone.

With only two wins from their past 20 home Premier League matches, Brighton needed a fast start to settle the nerves and got it when Welbeck was fouled inside the area by Ezgjan Alioski. The penalty was coolly converted by Gross.

Leeds, without Kalvin Phillips to injury, lacked the attacking spark to seriously trouble the hosts and Leandro Trossard and Neal Maupay both wasted huge opportunities to take the game away from Marcelo Bielsa’s men.

Brighton’s failure to convert those chances didn’t cost them though as Welbeck popped up with the second goal, skilfully making a chance for himself before firing into the bottom corner.

Man of the match: Lewis Dunk

They should have been full of confidence against the flaky Seagulls but stepped off their opponents, allowing them to work their clever passing moves through midfield. Trossard had already tested Illan Meslier twice before Brighton did take the lead from the spot.

Alioski clumsily upended Welbeck in the area and Gross confidently found the bottom left corner with the resultant spot-kick, despite Meslier going the right way.

Leeds improved with the ball but struggled with their final pass against a watertight Brighton back five, led imperiously by Lewis Dunk.

Brighton should have made it 2-0 before the break.

Diego Llorente was dispossessed by Welbeck and, after the ball was worked back across the area, Belgium forward Trossard somehow blazed high and wide with the goal gaping.

With Brighton having dropped 20 points from winning positions this term, head coach Graham Potter would have been concerned to see more chances come and go.

Welbeck flashed a low shot across goal just before the whistle, while Joel Veltman rifled over immediately after the restart. There was no response from Leeds though. Robert Sanchez had little to do with his defence snuffing out most of the danger. 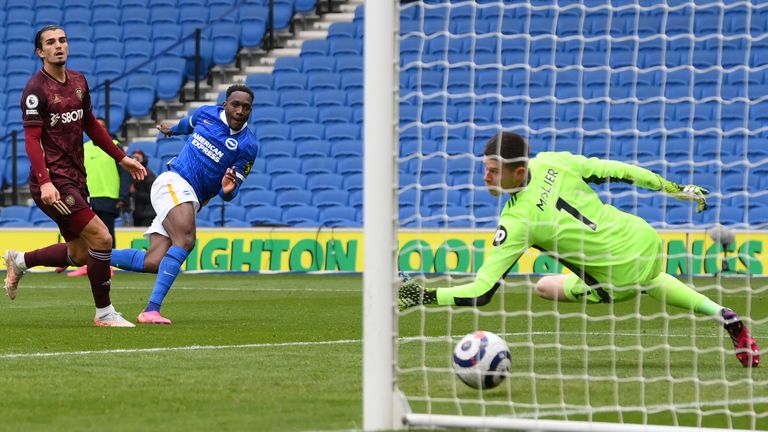 Chances continued to be concentrated at the other end of the field.

White headed onto the roof of the net against his former side, while unmarked Maupay scuffed wide after being expertly teed up by Trossard.

The killer goal did eventually come.

Pascal Struijk hoisted a clearance into the air and, as he went to close down the loose ball, Welbeck expertly whipped it away from him with a deft touch before smashing low across goal into the far corner. The celebrations suggested Brighton knew this was a big result.

Man of the match: Lewis Dunk

An impeccable chest pass back to his goalkeeper Robert Sanchez on 74 minutes triggered a thought: why isn’t Gareth Southgate watching Lewis Dunk?

Conor Coady seems to be the likely back-up for John Stones and Harry Maguire at the Euros due to his ability to play at the heart of a back three. But Dunk is equally, if not more, effective at such role judged on his performances in the second half of this season. He is the leader in the best defence of sides in the bottom nine, conceding 39 goals and has kept six clean sheets in their last eight home games.

He was absolutely faultless in this encounter, marking Patrick Bamford out of the game, who failed to have a shot at goal, and repelling everything Leeds mustered in his direction. When you consider the lack of options in the centre of England’s defence, how he only has one cap for his country is a mystery.

Brighton have an eight-day break now with their next fixture coming against Wolves next Sunday (12pm kick-off). Meanwhile, Leeds host Tottenham in the early Saturday game next weekend (12.30pm kick-off).