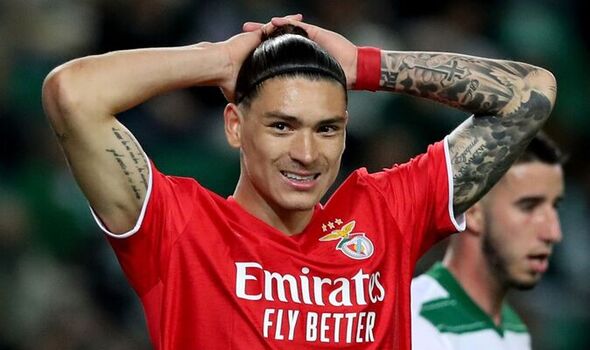 Benfica have reportedly rejected Manchester United’s ‘opening offer’ for Darwin Nunez and there are suggestions the Red Devils have been told to raise their offer by just £8.5million to get the move over the line. The highly-coveted Uruguayan international has made his way towards the top of Erik ten Hag’s striker shortlist and is expected to leave Lisbon this summer.

A long list of clubs including Liverpool, Atletico Madrid and Newcastle are believed to be tracking the centre-forward, who struck 34 times in all competitions this season.

According to Correio de Manha, United have submitted their opening proposal for the player in the past few days, worth an estimated £89m with Andreas Pereira also included in the package.

It’s understood there was £64m tabled up front with around £17m in bonuses.

“Benfica have already told those responsible at United that the deal requires more money’”, he said.

“Ultimately a bonus package can be included but involving players such as Andreas Pereira would be difficult.”

The suggestion in Portugal is that just £8.5m could be enough to get the deal over the line.

A new striker is among United’s top priorities this summer as Ten Hag looks to bring in some competition and cover for Cristiano Ronaldo.

The Portuguese international had to do it all alone last season, netting 18 times in the Premier League on his return to England.

Nunez was the subject of a club-record offer from West Ham on transfer deadline day but Benfica dug their heels into the ground.

They are now expected to reap the rewards of their strong negotiating stance, as Nunez’s value has continued to sky-rocket.

Express Sport understands United have watched the prolific frontman over 15 times this season.

Club scouts were at the Estadio da Luz to watch him bully Barcelona in a 3-0 Champions League victory last September.

Benfica are said to believe Nunez could be sold for over £100m as club chiefs target a record sale.

Super-agent Jorge Mendes is likely to have a hand in any potential transfer that materialises in the coming months after joining forces with the striker.