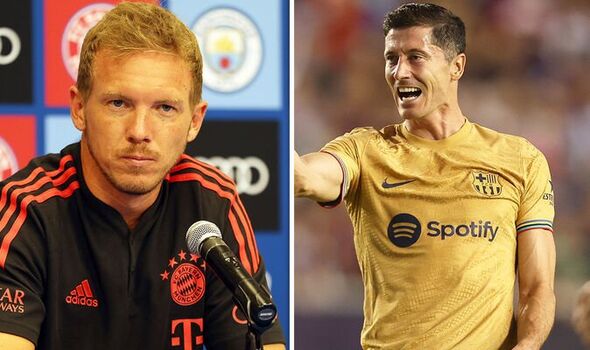 Bayern Munich manager Julian Nagelsmann insists Mathys Tel is not a replacement for the departed Robert Lewandowski. The Bundesliga giants completed the signing of French wonderkid Tel, who has been dubbed the next Kylian Mbappe, earlier this week for a fee of up to £24million (€28.5m).

Bayern are reeling after Lewandowski’s exit to Barcelona. The Poland striker scored 153 goals in his last three seasons in Germany.

Lewandowski had entered the final year of his contract at the Allianz Arena and was determined to leave. Tel made 10 appearances for Rennes last season despite only turning 17 in April.

Nagelsmann is excited by the teenager’s arrival and hopes he can make a contribution this term. He said: ‘He’s a very young talented player, he can play in many positions, centre forward, wing forward.

“He’s very quick, strong, with his whole body, good at defending the ball, also good at deep runs. I hope he will be comfortable with the group as soon as possible. He may score some goals.”

However, he insists it is not fair to put pressure on Tel to be the player to replace Lewandowski. He added: “He’s not a one-on-one for Lewy.

“I think it’s normal when you talk about his age and his appearances in professional soccer. But he could one day be one of the best forwards and that’s our aim, our plan.

“We always try to find good young talented players who could develop into world-class players, and he could be one of these players.” Tottenham striker Harry Kane has been linked as a potential replacement for Lewandowski. 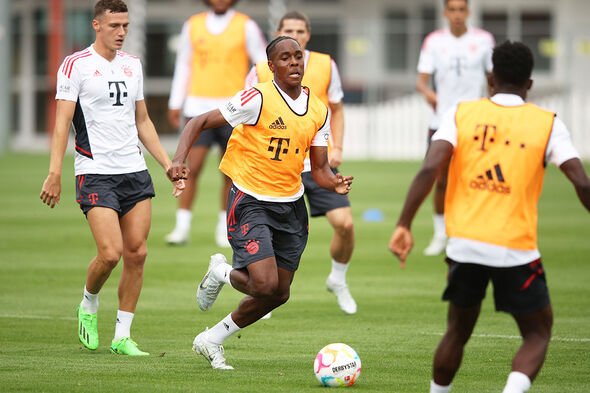 Nagelsmann refused to rule out a move for the England captain last week. He said: He’s very expensive, that’s the problem. But brilliant player, one of two or three who can play as a centre forward [as well as a] No 10, but he’s very strong, brilliant with [his] head and both feet.

“He could score a lot in the Bundesliga, I don’t know the price, but it’s really tough for Bayern Munich. We’ll see what happens in the future.”

However, Spurs boss Antonio Conte was not pleased with Nagelsmann’s comments. The Italian said: “For sure, I am a coach that does not speak about other players at other teams. I don’t know why. The situation with Tottenham is very clear. The plan is very clear with the club.